Rugby player Henry Slade has said he will not have a Covid vaccine, claiming he ‘does not agree with it all’.

It makes him the first high-profile British athlete to go publicly against expert advice.

The 28-year-old, who has Type 1 diabetes, is listed as clinically vulnerable and was offered a jab as part of the sixth priority group.

But he said he does not trust the Government’s recommendation and that being fit and healthy he ‘does not fancy it at all’.

Diabetes UK ‘strongly encourages’ anyone with the condition to get vaccinated.

Its website states: ‘People with diabetes are vulnerable to developing a severe illness if they do get coronavirus, and vaccines are the most effective way to prevent that from happening.’

Mr Slade said frequent testing because of his job offers him protection. The Exeter player, who won his first of 38 England caps in 2015, told The Daily Telegraph: ‘I have had vaccines in the past and have fallen pretty unwell with them afterwards. 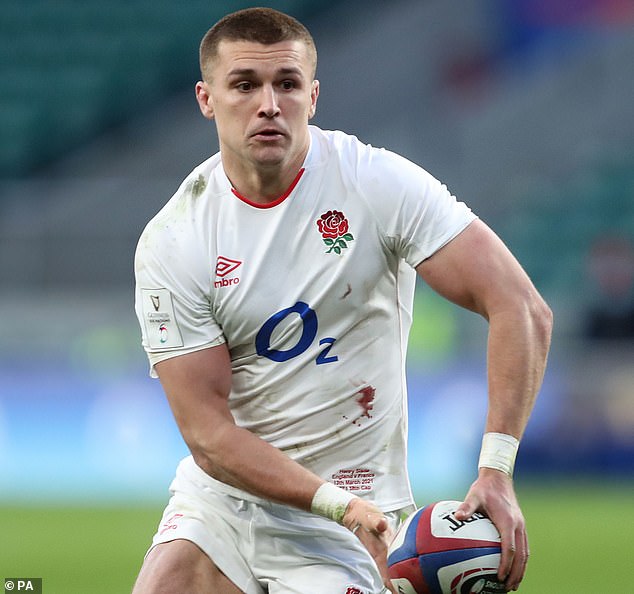 Henry Slade (pictured above, in March this year), 28, who has Type 1 diabetes, is listed as clinically vulnerable and was offered a Covid jab as part of the sixth priority group 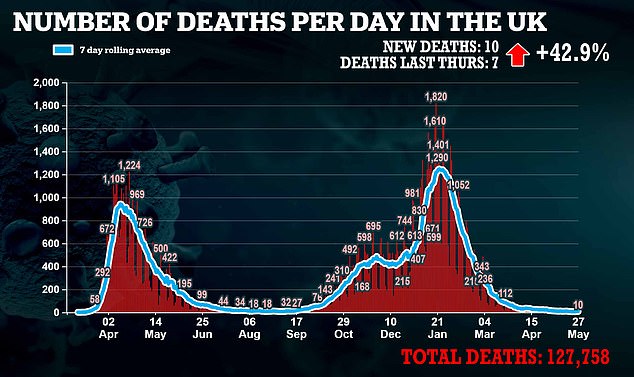 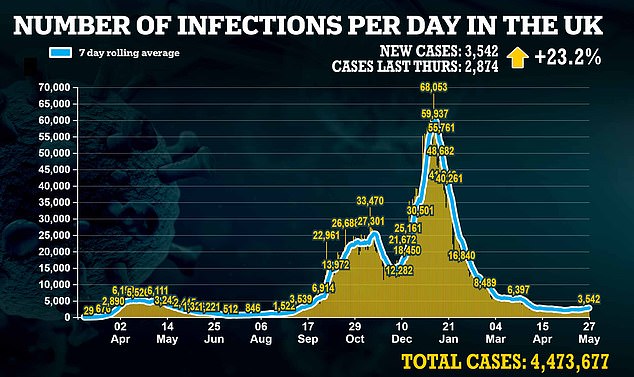 ‘I don’t know if that has anything to do with the diabetes or not. I am going to stay away from this one. I just think there hasn’t been anywhere near enough testing to deem it safe.’

The NHS stresses that the Covid-19 jabs available in Britain are safe and effective.

Cholesterol may be helping the coronavirus to infect human cells by acting as a taxi service, according to lab studies.

The findings, published in November last year, may explain why people with metabolic conditions such as diabetes and cardiovascular disease, who often have elevated cholesterol levels, make up a disproportionate number of patients who develop severe Covid-19 symptoms.

Researchers found that SARS-CoV-2, the virus that causes Covid-19, can stick to cholesterol molecules as they bind to their regular cell receptor, called SR-B1.

This helps to position the pathogen so that its spike protein can bond with the ACE2 receptor, which allows it to infect the cell.

A study published in Nature Metabolism by researchers at the Chinese Academy of Military Medical Sciences looked at the role of ‘good’ cholesterol, otherwise known as high-density lipoproteins (HDL), in coronavirus infection.

This graphic shows how cholesterol may be hijacked by SARS-CoV-2 to aid the infection of human cells. The virus binds to cholesterol and when cholesterol then attaches to its SR-B1 receptor on the surface of human cells, it brings the virus with it, which allows it to latch onto ACE2 allowing it to infect cells

The study looked specifically at the SR-B1 receptor, which connects with cholesterol molecules and is found on cells throughout the human body, including in the lungs, where coronavirus targets.

SARS-CoV-2 cannot exploit this receptor directly, the study found, but it can take advantage of the process of cholesterol connecting to SR-B1 in order to infiltrate cells.

The viral spike on the coronavirus — the same one which latches on to ACE2 — has two sections, dubbed subunit one and subunit 2.

In their experiments, the Chinese scientists found subunit one can attach to cholesterol. This means when the cholesterol naturally migrates to its receptor, it brings the coronavirus to the cell surface as well.

The researchers then discovered that by blocking SR-B1 and neutralising it, this inhibits infection.

They say that targeting the SR-B1 receptor could be a potential avenue for future treatments.

Its guidance states: ‘The vaccines approved for use in the UK have met strict standards of safety, quality and effectiveness set out by the independent Medicines and Healthcare products Regulatory Agency.’

He told the paper his dependence on his body and physical health did not influence his decision.

The NHS says vaccines will only be available once they have been thoroughly tested for safety and efficacy.

But British health chiefs last month recommended all under-40s are offered an alternative to AstraZeneca’s vaccine because of blood clot fears.

Statisticians analysed the numbers and found rates were slightly higher among younger adults, with females appearing to be at most risk, too.

Cambridge academics estimated around 1.9 in every 100,000 twenty-somethings given AstraZeneca’s jab would suffer serious blood clots alongside abnormally low platelet levels (thrombocytopenia) — the specific disorder linked to the jab. For thirty-somethings the figure was 1.5.

They compared that against the average number of Covid intensive care admissions that would be prevented by giving that cohort the jab.

And they then analysed the risk/benefit ratio in different scenarios, based entirely on how widespread the disease was at the time.

For example, only 0.2 ICU admissions would be prevented for every 100,000 twenty-somethings given the jab at prevalence levels seen in April (fewer than 30,000 infections per week). For adults in their thirties, the figure was around 0.8.

It showed, however, the benefits of giving AstraZeneca’s vaccine to 40-49 year olds outweighed the potential risk (1.7 prevented ICU admissions per 100,000 people compared to 1.2 blood clots).

But the decision to recommend under-40s are offered Pfizer or Moderna’s jab instead was basically only taken because the outbreak was squashed to extremely low levels, as well as the fact younger people are known to face tiny odds of falling seriously ill with coronavirus.

For older adults, who the disease poses a much greater threat to, the benefits of vaccination are clear, regulators insist. Jabs have already saved around 13,000 lives in England, top scientists believe.

However, because there were so few blood clots, it made it impossible for No10’s vaccine advisory panel to give an exact age cut-off. Instead, they were only able to analyse figures by decade.

The first clots to alarm people were ones appearing in veins near the brains of younger adults in a condition called CSVT (cerebral sinus venous thrombosis).

Since that, however, people have developed clots in other parts of their bodies and they are usually linked to low numbers of platelets, which is unusual because platelets are usually used by the immune system to build the clots.

In most cases people recover fully and the blockages are generally easy to treat if spotted early, but they can trigger strokes or heart or lung problems if unnoticed.

Symptoms depend entirely on where the clot is, with brain blockages causing excruitiating headaches. Clots in major arteries in the abdomen can cause persistent stomach pain, and ones in the leg can cause swelling of the limbs.

Some countries have decided to stop using the jab altogether, with Denmark and Norway opting against rolling it out. Other nations have restricted it to certain age groups. 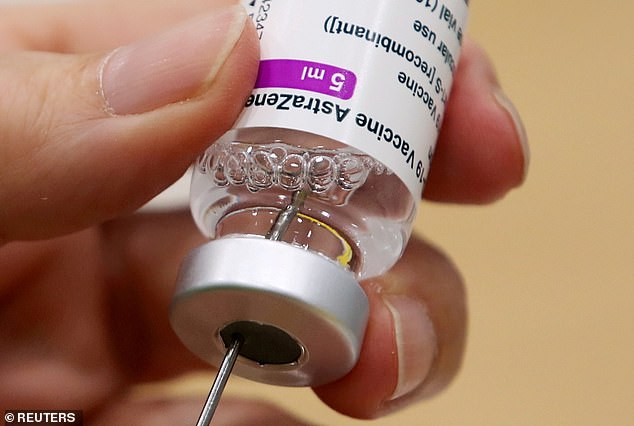 Diabetes UK ‘strongly encourages’ anyone with the condition to get vaccinated. Its website states: ‘People with diabetes are vulnerable to developing a severe illness if they do get coronavirus’ (file photo of Covid vaccine dose)

But AstraZeneca’s jab isn’t the only one thought to cause blood clots. Johnson & Johnson’s single-dose vaccine, which has yet to be approved in the UK, has been linked to 28 cases in the US out of more than 10.4million shots.

Researchers in Germany believe the problem lies in the adenovirus vector — a common cold virus used so both vaccines can enter the body.

Academics investigating the issue say the complication is ‘completely absent’ in mRNA vaccines like Pfizer’s and Moderna’s because they have a different delivery mechanism.

Experts at Goethe-University of Frankfurt and Ulm University, in Helmholtz, say the AstraZeneca vaccine enters the nucleus of the cell – a blob of DNA in the middle. For comparison, the Pfizer jab enters the fluid around it that acts as a protein factory.

Bits of coronavirus proteins that get inside the nucleus can break up and the unusual fragments then get expelled out into the bloodstream, where they can trigger clotting in a tiny number of people, scientists claim.

It included an Arab player, but Ronaldo missed it … The “WhoScored” squad for 2020

NFL Week 5 roundtable: What are biggest disappointments of 2020 season so far?

Ryanair and bosses behind three major English airports are today preparing to take the Government to...