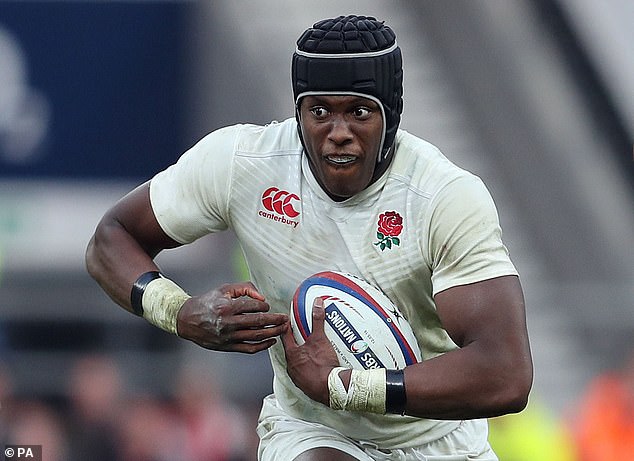 English rugby has been urged to lead a global drive for diversity to rid the game of the ‘image problem’ which means it is still regarded as elitist.

Bath prop Beno Obano has produced and directed the documentary Everybody’s Game, which is released on Amazon on Thursday. It features insight from himself and his cousin Maro Itoje, as well as England players Anthony Watson and Ellis Genge, and Wasps’s Biyi Alo.

The film studies the thorny issues of race and class — recognising the progress that has been made towards inclusivity, but reflecting how much work the game still has to do.

Maro Itoje (above) admits that rugby is seen as elitist, despite efforts to broaden its appeal

Obano’s superb form for Bath has seen him make Eddie Jones’s squad this autumn. The 26-year-old loosehead has established a stellar reputation on the field and the documentary will enhance his standing as someone determined to promote the belated expansion of rugby in BAME communities in the UK and beyond.

‘Rugby could be huge and this country could be the catalyst for it,’ Obano says. ‘I’ve been lucky to benefit from the sport and more people should have that chance. Rugby in its essence is everybody’s game, but the way it is portrayed means that it’s not.

‘Rugby is considered an elitist sport and that’s because it’s played in private rather than state schools. Rugby has had a privileged history, so it’s happy to stay in the communities of privileged people and doesn’t really come into ones like mine.’

Ellis Genge, who grew up in Bristol, says that rugby has ‘always been a posh sport’

Obano adds: ‘When you are young, black and from London, you talk a little bit different and listen to different music. There’s often a tendency to see those kids as brash, when that’s not the case — that’s just who they are.’ Watson concedes that his public school background meant he didn’t consider the ‘colour and class issue’ in rugby before meeting Obano, Genge and Kyle Sinckler. The Bath winger delivers an impassioned message.

‘I feel like the game is still a bit backwards,’ he says. ‘I feel for the players of colour who come through because there’s a level of bias there. They are on the back foot before they have started because of how they are perceived. It’s getting better slowly, but it’s by no means perfect.’

Itoje echoes Obano’s view that rugby is seen as elitist, despite efforts to broaden its appeal and participation base. The Saracens lock, among the favourites to captain the Lions in South Africa next summer, addresses the need for more black role models.

‘I remember growing up, looking at players and I didn’t necessarily see too many who looked like me,’ Itoje says. ‘I was drawn to players such as Ugo Monye and Topsy Ojo, who did.

‘If I look at the 2003 World Cup-winning team, there was one person of colour within it, Jason Robinson. If I look at the 2020 team, there’s probably a third of the team who don’t fit the description of Anglo-Saxon or Caucasian. Rugby is becoming more representative of the society England is today.’

Itoje adds: ‘We are moving in a positive direction but more can be done. We are scratching the surface in terms of the communities that rugby can really make a big impact in. If rugby does that in the long run, it will benefit the whole game.’

Genge grew up in the Knowle West area of Bristol and says: ‘No one knows rugby is a professional sport where I grew up. Rugby has always been a posh sport. The brand of people who play it has always been very similar.’

But Alo hopes the increasing numbers of black players in the Premiership can inspire future generations. ‘People like us are breaking the mould,’ he says.

‘It’s extremely positive, because in the country we’re in there’s a lot of people like us. If they don’t see people like them playing professional rugby, they’re going to think, ‘I don’t fit in there’.’