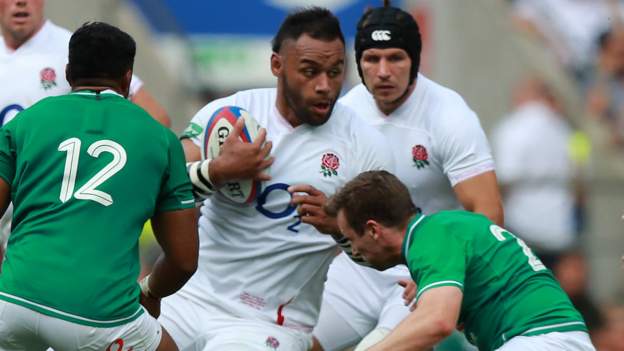 England number eight Billy Vunipola says he is expecting a tough battle against an “in your face” Ireland team in Saturday’s Autumn Nations Cup match.

“It is not just ‘we want to do well’, it is ‘England are there and we want to take them down’. They want to play a brand of rugby that is in your face.”

Coach Eddie Jones says it is England’s “most important game of the year”.

The Australian, who was appointed five years ago on Friday, has once again ensured headlines with his pre-match comments.

As well as questioning the scrummaging technique of Ireland prop Andrew Porter, Jones joked about the residency qualification that has brought five southern-hemisphere raised players into the visitors’ starting XV.

It is not the first time he has antagonised Ireland. In 2018 he apologised after offensive comments he made about the country emerged online.

It is only the second time that Jones has locked horns with Andy Farrell as the opposition head coach, with the first being the 24-12 win in February’s Six Nations win.

Farrell, who questioned whether his team were “up for” that game in its aftermath, said that a line-up with 10 new faces compared to their last trip to Twickenham could bring about a different result.

“I’ve not got a crystal ball. But what I do know is that this is a different group and it’s a different game at the weekend,” he said.

“We’ve got new combinations all over the field that are coming together and learning from these type of experiences all the time.”

In Sexton’s absence, 24-year-old second row James Ryan captains Ireland for the first time from the start of a match.

He will come up against Maro Itoje, another man who led his country at age-grade level and has been tipped to do the same at senior level and with the British and Irish Lions.

Itoje played down the importance of their personal duel within the context of the match.

“I wouldn’t go chasing an individual,” he told BBC Sport. “For me it’s all about the team. My focus is for England to win on Saturday. It’s not for me to win an individual game within a game against another player.

“It is for England to win and I will do my utmost to make that happen.”

‘I have to book in with him now’

As a boy, England captain Owen Farrell celebrated with dad Andy during triumphs with league side Wigan Warriors. As a young man, Owen made his Saracens debut in the same team as his father. He made his international debut while Andy was England defence coach.

Now, they find themselves on opposing sides.

Owen says that his father’s promotion to the Ireland head coach role in the wake of the Rugby World Cup has meant their schedules rarely coincide.

“I haven’t seen him for a long time, but we obviously still speak as anyone would do, normally.

“It is a step up but it is something he has always wanted and it’s good he has got this opportunity now.”