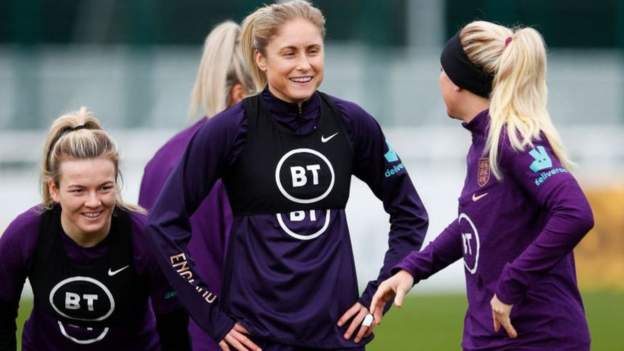 
Steph Houghton says she “can’t wait to put on the England shirt again” against Northern Ireland after the frustration of not contesting an international fixture in almost 12 months.

The Lionesses have not played since a 1-0 loss to Spain in March last year because of the coronavirus pandemic.

England captain Houghton says the side are keen to get “back into the rhythm of playing again” when they return for Tuesday’s friendly at St George’s Park.

“We are excited,” said Houghton.

“We just can’t wait to put on the England shirt again.”

England have had games against Germany and Norway cancelled in the past year.

Northern Ireland completed their final four Euro 2022 qualifying group games and beat the the Faroe Islands 5-1 in December to clinch a play-off place.

“There is a bit of frustration there as well because we work so hard away from the international scene to get picked for England,” added Houghton.

“You get picked in the squad and ultimately you want to get as many caps as you can. We want to show everyone what team we are and the individuals that we have got.”

Houghton says England midfielder Jill Scott is a “legend” and “one of the best in the world” as she prepares to win her 150th cap for the Lionesses against Northern Ireland.

“She is a legend in my eyes. I would have her in any team I play in,” said Houghton.

“Everybody speaks about what she brings off the pitch and the character she is but ultimately she’s an unbelievable footballer.

“To show that she has been able to play 150 times for her country shows that. She has been one of the best midfielders in the world and has shown that consistent level of performance so I’m full of admiration for her.”

Manchester City midfielder Scott, 34, will still be 22 games behind record-appearance holder Fara Williams when she reaches 150, but Houghton believes she is not finished yet.

“I know how hard she works and how much it means to her to play for England,” she added. “I think we throw the word ‘legend’ around but ultimately to become only the second person to get 150 caps, I’m so proud of her.

“It doesn’t come through luck but through hard work and willingness to improve and learn.”

Chance for Northern Ireland to impress?

Interim England boss Hege Riise says the Northern Ireland players may see the game as a chance to play themselves into contention for a Team GB place at the Tokyo Olympics.

“Of course it’s a great opportunity for us to see players and for us to make up our minds,” she said.

“We don’t know exactly. I have seen different styles – three at the back and four at the back. So we prepare for 4-2-3-1, and we know their central line is very experienced so we know they will have pride going into the game.”

Riise says England will be aware of a “very experienced” central line for Northern Ireland while Houghton expects a competitive fixture.

“We will give them the respect they deserve,” said the 32-year-old. “There are a lot of young players coming in that’s changing the way they play so we have to be respectful of that.

“We have to expect a tough game. They will be aggressive and competitive. Whenever we play a home nation it’s always competitive so hopefully it will be a good game.”

Northern Ireland boss Kenny Shiels say he is looking forward to seeing how his part-time players match up against “the might of England”.

Shiels’ side will use the game as preparation for their two-legged Euro 2022 play-off in April against a yet-to-be-named opponent.

“We do know that we have girls who are nurses, work in B&Q and Lidl and all those things, so they’re not going to be conditioned the way English players are,” Shiels said.

“That’s a major disadvantage, but we’re taking that hit and we’re going to try and show some courage to take on the might of England. That’s what we’re doing.

“I’m sure we will benefit from that and then we take it into the next game, which will be a real tough one also.”