England and Scotland meet in a major tournament for the first time in 25 years at Wembley on Friday in a match with huge implications for both nations’ Euro 2020 hopes.

Gareth Southgate’s England will qualify for the knockout stage with a win while Scotland are seeking to keep their hopes of progressing alive.

England beat Croatia 1-0 in their Group D opener on Sunday.

Steve Clarke’s Scotland were beaten 2-0 by the Czech Republic a day later.

Their previous meeting at a major tournament came in the group stages of Euro 96, as Alan Shearer and Paul Gascoigne scored in a famous 2-0 win for England at Wembley – a match in which current England boss Southgate played.

What are the permutations?

It is not quite a must-win for Scotland but a defeat at Wembley would leave them in a perilous position.

The top two teams in each of the six groups, along with the four best third-placed teams, will advance to the last 16.

Scotland will not be able to finish in the top two if they lose to England and the Czech Republic get a result against Croatia.

For England, another three points will confirm a place in the knockout stage – and the Three Lions would be guaranteed a top-two finish if they win and Croatia fail to beat the Czech Republic.

What are the big selection dilemmas for both managers?

Will Southgate stick with his winning formula – and what changes will Clarke make in response to defeat?

England’s Manchester United centre-back Harry Maguire has confirmed he is available for Friday’s match after he missed the Croatia game with an ankle ligament injury sustained in May.

Aston Villa’s Tyrone Mings started alongside John Stones in Maguire’s absence and the right-footed Kieran Trippier was deployed at left-back, ahead of Luke Shaw and Ben Chilwell, the latter not even making the matchday squad.

Leeds United midfielder Kalvin Phillips, called ‘The Yorkshire Pirlo’ by his club supporters, produced a stellar performance against Croatia as he started in a midfield three alongside Declan Rice and Mason Mount.

But Villa playmaker Jack Grealish and Liverpool skipper Jordan Henderson are among those in contention for starts against Scotland, while Marcus Rashford and Jadon Sancho offer attacking alternatives.

Meanwhile, Clarke must find a way of motivating his players to bounce back from an underwhelming performance in their first major finals in 23 years.

Scotland are boosted by the return of Arsenal defender Kieran Tierney, who will be fit to face England after taking part in training this week.

Meanwhile, goalkeeper David Marshall received criticism following the second of Patrik Schick’s goals at Hampden Park on Monday – an incredible shot from just inside the halfway line which sailed over the backtracking goalkeeper. Craig Gordon would be the alternative option.

Scotland failed to score despite 19 shots at goal – compared to the Czechs’ tally of 10 – and that profligacy could see Southampton’s Che Adams given a start in attack after a promising substitute appearance on Monday.

‘They don’t come much bigger than this’ – what have the managers said? 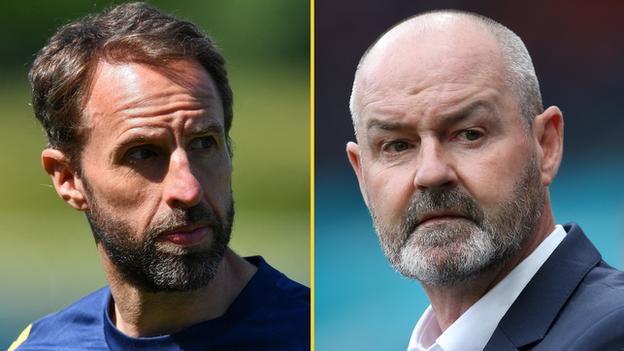 England manager Gareth Southgate: “We know that we have got to compete because otherwise you can get overrun in any game. Our focus has got to be on performances getting better with every game we play.

“For the fans and us it is a big occasion but it is another opportunity for three points and our objective is qualification. That is what we have got to focus on.

“In the past we have done that very well. We did that on Sunday which was a big occasion for everyone and we handled it very well.”

Scotland manager Steve Clark: “We have good professionals in the squad who are used to playing in big matches. They don’t come much bigger than this one.

“The objective at the start of the tournament was to get enough points to get out of the group stage and into the knockout stage for the first time in our history as the men’s team.

BBC Sport football expert Mark Lawrenson is taking on BBC Radio 5 Live’s pundits, presenters and commentators to predict the outcome of every game at the 2020 European Championship.

The former Republic of Ireland international is predicting a 2-0 win for England against Scotland.

None of the pundits have predicted Scotland will be able to get a result at Wembley. Jermaine Jenas has gone for the biggest margin of victory for England with a 4-0 win, while Chris Sutton expects a 3-0 scoreline.

Discussing England’s hopes, Head of Sports Analysis at Nielsen’s Gracenote, Simon Gleave, said: “Our simulations gave England 97% chance of making it to the knockout stage before the opening match and victory in that has made the team almost certain (99.6%) of going through.

“England (13% chance) are third favourites to win Euro 2020 behind France and Belgium and are given a 78% chance of beating Scotland – the highest winning chance of any group phase match at this tournament.

“Defeat against the Czech Republic has reduced Scotland’s chance of reaching the last 16 from 57% to 20%.”

Friday’s match will be shown on ITV and you can listen to full commentary on BBC Radio 5 Live as well as follow live text coverage on the BBC Sport website and app.

The BBC will show highlights of the game on BBC One at 23:30, following Crouchy’s Year-Late Euros: Live.

The Football Association has asked fans attending the match to show respect and be on their best behaviour.

In England, those attending pubs indoors must do so in groups of up to six – or two households of any size – while groups seated outside may have up to 30 people.

In Scotland, restrictions vary according to region, ranging from level zero to level two. Groups of up to six from three households can meet indoors and up to eight from eight separate households outdoors in level two areas.

In level zero areas, groups of up to 10 from three households are allowed to meet indoors and up to 15 people from 15 households can meet outdoors.