As Scotland’s fans celebrated riotously in the Wembley rain, the home supporters unleashed their frustration with a chorus of boos.

Such is the lot of England at a major tournament.

Win — even if it’s scrappy, cagey win like that against Croatia — and England is a team of world beaters, set to bring football home and dominate for decades to come.

Failure to win — particularly if that failure involves a scrappy, cagey goalless draw like that against Scotland — and the Three Lions are immediately branded as toothless frauds.

The reality, of course, is seated somewhere in the middle carriage of this emotional roller coaster — although there is unlikely to be much levity during the fallout.

“With the press and social media, there might be an overreaction now,” Declan Rice presciently stated in his post-match interview with the BBC.

In both matches so far this tournament, England has hit the frame of the goal early in the contest.

On both occasions, the ball bounced away to safety.

Had those efforts gone in, the entire dynamic of both games would likely have changed, forcing both Croatia and Scotland to open up and attack more, creating space behind for the speedsters Raheem Sterling and Phil Foden to exploit. England have three points on the board and a revenge victory over Croatia, but it somehow doesn’t feel the same as 2018, writes Simon Smale.

Without an early lead though, England was forced to try and break down both sides defensively, and the lack of inventiveness in the current lineup going forward is a genuine concern.

In both matches at this tournament, England has failed to out-shoot its opponents, registering nine shots to Scotland’s 11 and matching Croatia’s eight in its opening game.

England had 61 per cent possession against Scotland, while it was more even against Croatia.

In both matches, England mustered just one shot on target.

Had Sterling not scored in England’s opening game, would the narrative be all that different to that after this Scotland draw? You’d wager not.

In both matches, England’s midfield has been laborious in getting the ball into the feet of its attacking players.

It didn’t help that once they’d got the ball there, there was limited inventiveness or ability to do anything with the ball, with Harry Kane looking lost and isolated before being taken off.

The Spurs striker touched the ball just 10 times in the first half — the lowest number of any player on the field.

When Scotland packed men behind the ball at Wembley on Saturday, there was no spark to break through the lines of defenders.

“We did not have the answers to break them down,” England manager Gareth Southgate told the BBC.

“We have to better, we did not find answers to Scotland’s questions and could not find that pass.”

Playing two holding midfielders in Rice and Kalvin Phillips in front of a back four is defensively sound, but limits Southgate’s options from an attacking sense.

That 4-2-3-1 formation does allow Reece James and Luke Shaw to both get forward from fullback, but as Scotland showed, 3-5-2 can be just as defensively sound given the right personnel, while also giving more attacking options.

In fact, had Scotland managed to hold onto the ball more effectively, they might have been able to cause England even more problems defensively.

The attacking options are there for Southgate, who said he would review his side for the game against the Czech Republic.

However, the England coach’s natural reticence to embrace England’s wealth of attacking depth means Dominic Calvert-Lewin and Jack Grealish have been reduced to bit-part appearances while Jadon Sancho, one of Europe’s most exciting attacking talents, is yet to even step foot on the pitch.

“We have a squad and have to use it,” Southgate said. “The types of players on the bench, we have to use them.”

Southgate has to think fast if he is to find the key to help England unlock teams defences at this tournament, because at the moment, England doesn’t even really look like scoring.

The five most impressive sides at Euro 2020 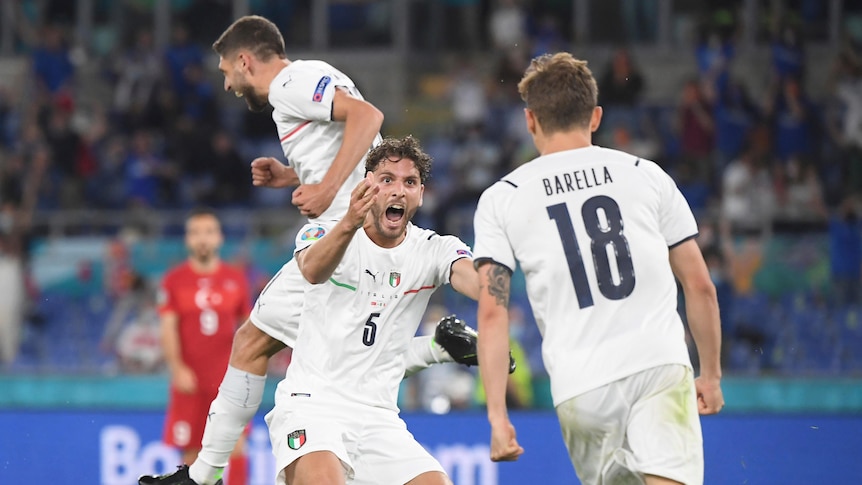 It’s still early days at Euro 2020, but the first round of fixtures has given us a clearer idea of who the most serious challengers are, writes Dan Colasimone.

“Tonight we didn’t have that cutting edge,” Rice admitted.

“There were chances for us but as the night kept going on we might not have ever scored.”

Defensive solidity is vital in tournament football, and two clean sheets from two, despite Scotland’s chances, has pleased Southgate and goalkeeper Jordan Pickford, who made one very good save to deny Stephen O’Donnell.

“The biggest thing tonight was that if we cannot win it, don’t get beaten,” Pickford said.

That’s true, but however, unless you’re scoring up the other end, that defensive solidity is going to be tested more and more, particularly against the tournament’s more technically adept teams.