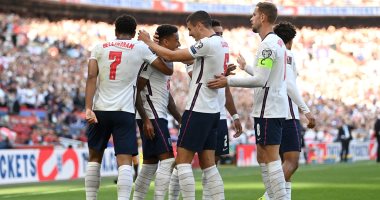 The England national team is facing a strong confrontation against its Polish host, which is scheduled for 9:00 pm today, Wednesday, at the “Slaski International Stadium”, as part of the sixth round of Group I in the European qualifiers for the 2022 World Cup in Qatar.

The English team enters tonight’s match at the top of Group I with 15 points, after winning all its five matches, while the Polish team is second with 10 points.

The Three Lions had won their last match against Andorra, 4-0, while Robert Lewandowski’s companions beat their host San Marino 7-1.

The England team is seeking to win tonight’s match in order to approach a new step towards qualifying for the 2022 World Cup in Qatar.

In another match, the German national team will be a guest of its Icelandic counterpart, at exactly nine o’clock in the evening, in the sixth round of the tenth group in the European qualifiers for the 2022 World Cup in Qatar.

The German team leads the tenth group table with 12 points, collected from 4 wins and a loss, while Iceland occupies the fifth and penultimate place with 4 points.

Hans Flick, the new coach of the German national team, hopes to continue to win the successive victory, after winning the last two matches against Liechtenstein and Armenia.

In the same group, Armenia will face Liechtenstein, and North Macedonia will host Romania.

What is the 3-day diet to lose weight? How does it work and what are its main drawbacks?