The Sport England Active Lives survey of 190,000 people suggests 30 per cent of the adult population were ‘inactive’ between March and May.

The proportion of people who said they did less than half an hour activity a week rose by 7.4 per cent, compared to before the pandemic.

The poor, elderly, and minority ethnic groups have been hit particularly hard, the data showed.

‘Stay at home’ orders meant millions of adults were unable to use the gym or leisure centres. And many Britons lack the space to do a home workout, or don’t live near a park.

Sport England, an organisation which helps develop grassroots sport and encourage activity, surveyed people on their activity habits between mid-March and mid-May.

The 190,000 participants were asked to recall activity over a 28 day reference period. Therefore, some respondents would have recalled some pre-lockdown activity if they were questioned in March.

The results showed the first seven weeks of the spring lockdown caused ‘unprecedented’ falls in mobility. 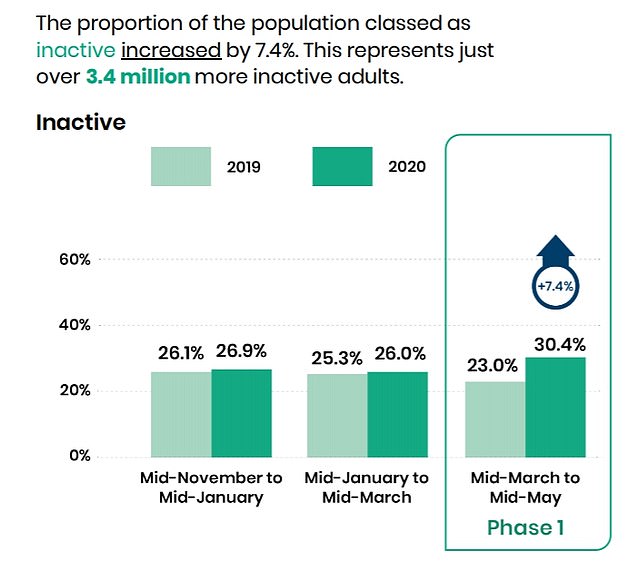 The proportion of people who said they did less than half an hour activity a week rose by 7.4 per cent, compared to before the pandemic

MINISTERS WILL CONSIDER ‘WORK OUT TO HELP OUT’

Matt Hancock has been urged to introduce a ‘work out to help out’ scheme to encourage physical activity for those in lockdown areas.

The Health Secretary said that he would ‘absolutely look into’ the idea, proposed by Tory MP Caroline Johnson (Sleaford and North Hykeham).

Ms Johnson suggested that the scheme could include free online activities targeted to each age group and physical ability.

She told the Commons: ‘The Prime Minister has been very clear in the risks of obesity of those who get coronavirus and that people who are obese have a more severe disease course than those who are slimmer.

‘But in Tier 3 areas, many gyms are being closed and many sporting activities are being restricted. So what is the Department of Health doing, what is (Mr Hancock) doing to ensure that we can encourage activity in people who are in those areas?

‘Perhaps a ‘work out to help out’ scheme, with free online activities targeted to each age group and each physical ability?’

Mr Hancock responded: ‘I love the idea of ‘work out to help out’. It is undoubtedly true from the science that I’ve seen that obesity contributes to a worse impact on you if you catch coronavirus.

‘It’s something the Prime Minister has spoken about with great passion and it’s something that we want to tackle. So I’ll absolutely look into that idea.

‘But I’d also say we’ve changed the proposals, both for people who are shielding and even in the highest risk, very high Tier 3 areas, to always be clear that outdoor exercise is a good thing.’

Earlier this year, Boris Johnson said that tackling the UK’s obesity problem could better prepare the country for health crises such as the Covid-19 pandemic.

In an interview with Times Radio, Mr Johnson said the UK was ‘significantly fatter’ than most European countries.

Mr Johnson has previously spoken about his own aims to lose weight after he tested positive for coronavirus in March which saw him spend time in hospital.

When applied to the population in England, it represents just over 3.4million extra adults.

The proportion of the population classed as active dropped by 7.1 per cent, from 65.3 per cent to 58.2 per cent.

It suggests three million fewer adults are doing 150 minutes of exercise a week.

Sport England said that gains made in the 10 months between May 2018 and February 2020 were ‘cancelled out’ by drops in activity levels during lockdown.

But overall, activity levels in England have remained stable across the 12 months from May 2019 to May 2020, it said.

The report found that with gyms shut across the nation, there was a boom in cycling, with 1.2million more people taking on the sport.

Outdoor running and jogging also increased by 731,000, but this was countered by a decrease in those using indoor treadmills at the gym.

There was a spike in interest in online exercise classes.

Sport England noted the ‘inspirational’ impact of people such as Joe Wicks, who put on virtual PE classes every morning for people to join from home, and a notable growth in those dancing and garden trampolining.

Women have seen a smaller drop off in activity levels (-1.2m/-5.4 per cent) compared with men (-1.8m/-8.9 per cent), which the researcher said was because they adapt to online classes quicker.

‘Overall, over the two-month period, there was an increase in home exercise of 2.1million and this was largely driven by women,’ the report said.

Men are typically more likely to take part in team sports, such as rugby and football, and racket sports – both of which were severely restricted during lockdown.

Sport England chief executive, Tim Hollingsworth, said the situation was nuanced, according to The Guardian.

While some people were able to adapt to an alternative way of keeping active, others were restricted by their living situation or ability.

Mr Hollingsworth said: ‘Though the early months of lockdown brought unprecedented disruption to our lives and had a huge impact on our overall engagement in sport and physical activity, it is also positive to see how many people turned to new activities.

‘It also highlights the challenges this year has brought to those groups who already find it harder than most to be active, with disabled people, people with health conditions and younger people struggling.

‘[It reminds] us of the importance of educational settings, community leisure facilities and team sports that underpin access to activity for so many people across England.’

Sport England also noted that the pandemic had widened inequalities observed between ethnic groups, with the largest in Asian people (-14 per cent).

Its report said: ‘Drops in activity levels were larger amongst those from Asian [excluding Chinese], black and other ethnic backgrounds – indicating they’ve found it harder to find new ways to stay active.’ 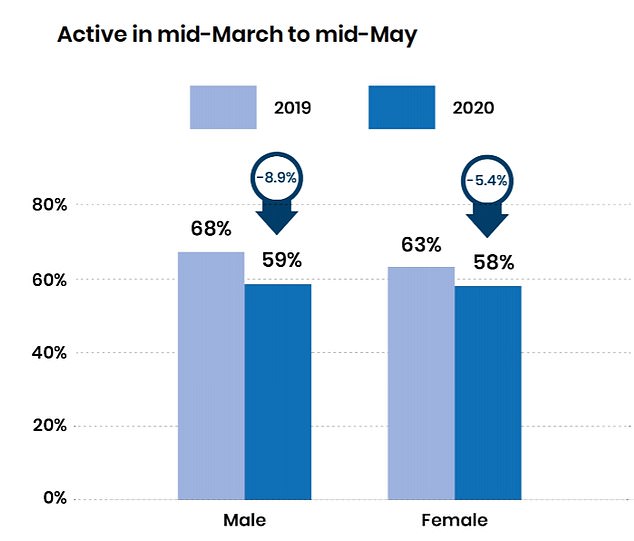 Women have seen a smaller drop off in activity levels (-1.2m/-5.4 per cent) compared with men (-1.8m/-8.9 per cent), which the researcher said was because they adapt to online classes quicker 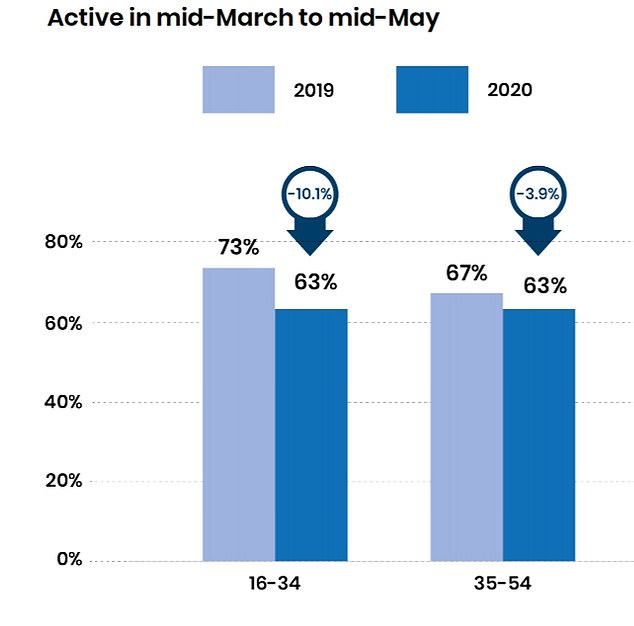 Those aged between 16 and 34 had also been hit particularly hard. The number of people in that age band who are active fell by 10.1 per cent, or 1.4million people 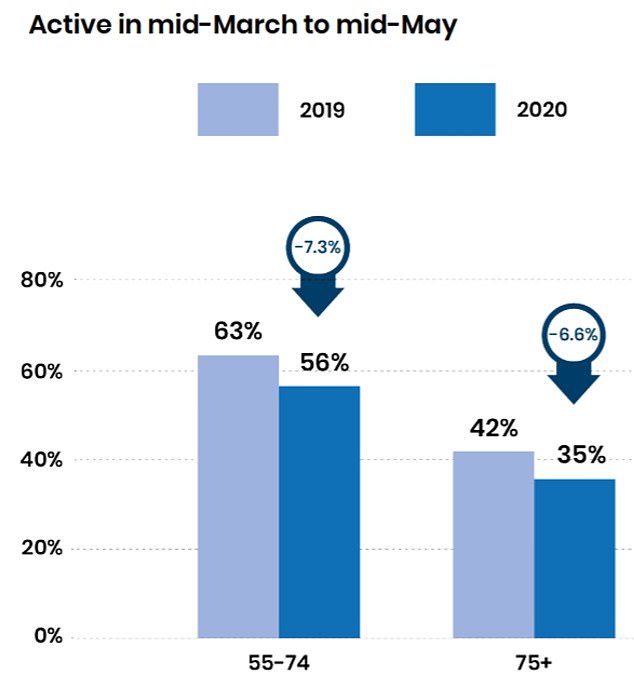 Over a quarter of a million over 75s are no longer classed as active, a drop of 6.6 per cent 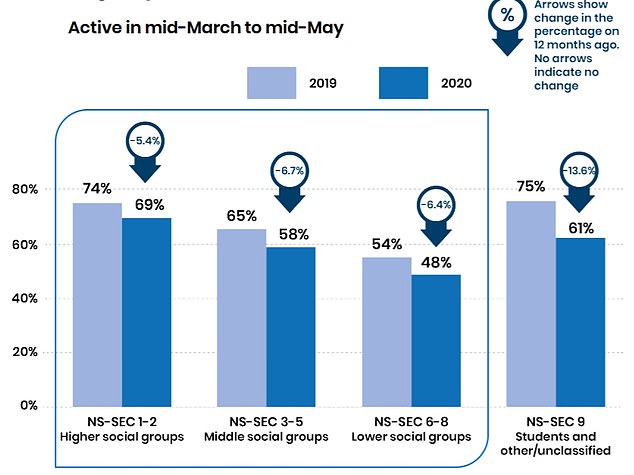 The report said: ‘Drops in activity levels were larger amongst those from Asian [excluding Chinese], black and other ethnic backgrounds – indicating they’ve found it harder to find new ways to stay active’

The gap between higher and lower socio-economic groups widened during the first weeks from mid-March.

People in the middle and lower band saw drops of 6.7 per cent and 6.4 per cent, respectively, compared to 5.4 per cent in the most affluent.

Large drops were seen in those over 75, who were part of the millions of people told they were more at risk during the pandemic and to be more cautious, regardless of how healthy they were.

Over a quarter of a million over 75s are no longer classed as active, a drop of 6.6 per  cent, meaning they no longer do more than 30 minutes of exercise per week. The proportion now classified as inactive has risen above 50 per cent.

However, the survey also noted that those aged between 16 and 34 had also been hit particularly hard. The number of people in that age band who are active fell by 10.1 per cent, or 1.4million people.

The survey highlights the importance of keeping gyms open and letting team sports continue in a safe way in order to reach health chiefs’ 150 minutes per week target.

However, hundreds of gyms and leisure centres in the North West have been forced to shut because they fall under the toughest coronavirus rules.

Under Tier 3 restrictions, gyms have to close to stop the spread of the coronavirus, which has caused uproar among the fitness community.

It comes despite a Government drive to try and reduce obesity levels in the UK to try and mitigate a surge in Covid-19 cases – extra weight has been discovered as an independent risk factor for severe coronavirus.

Health Secretary Matt Hancock has been urged to introduce a ‘work out to help out’ scheme that reflects the ‘Eat Out to Help Out’ initiative in August.

Tory MP Caroline Johnson, who represents Sleaford and North Hykeham, suggested it be considered in the House of Commons on October 15, after gyms and leisure centres in the Liverpool city region closed.

Ms Johnson suggested the scheme could include free online activities.