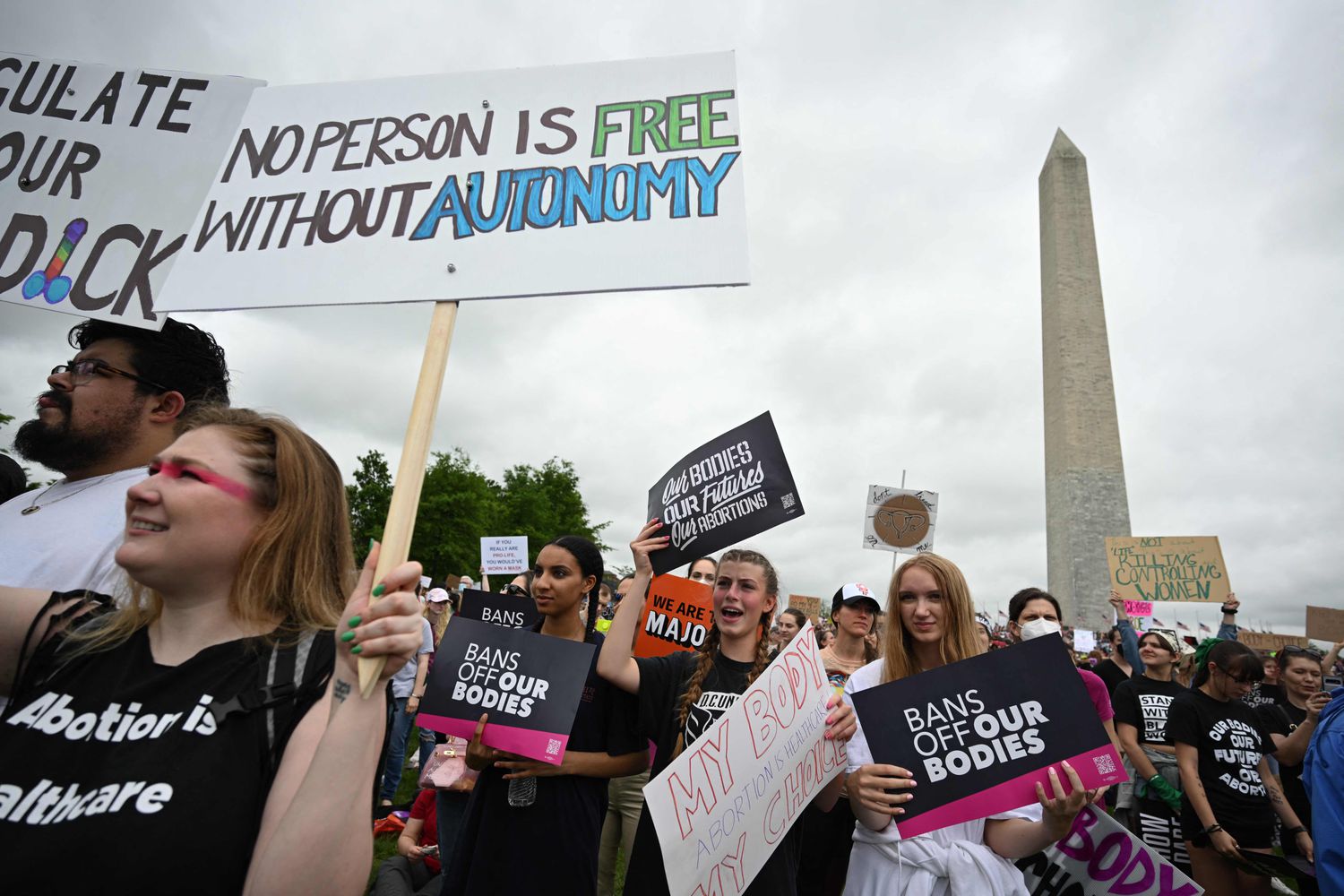 Tens of thousands of people have met this Saturday in 200 events spread over 44 cities in the United States – from Anchorage (Alaska) to Palm Beach (Florida) and from Honolulu (Hawaii) to Portland (Maine). They are protesting against the imminent illegalization of the right to abortion in 26 of the 50 states of the union. In those places controlled by the Republican Party, live 36 million women of reproductive age, who are about to lose a right they have taken for granted for half a century.

In New York, the demonstration started across the river and headed to Manhattan, to the beat of drums, across the Brooklyn Bridge, while in Los Angeles, due to the time difference, the meetings started as soon as like eight in the morning, in places like the Pasadena City Hall. Although the most symbolic march has been, for obvious reasons, that of Washington, where the organizers estimate that “between 20,000 and 30,000 people” have attended. There is the Supreme Court, whose nine judges are cooking these days a sentence that will clearly overturn the precedent established in 1973 by a ruling of that same court for the case Roe against Wadewhich made the right to decide for women up to week 23 constitutional.

The appointment was in the great monumental esplanade of the Mall. Shortly before the beginning of the speeches, at about noon on a day that dawned gray and a storm threatened, the crowd was organizing at the foot of the obelisk in memory of Washington, in front of the White House, and around a huge pink banner held by dozens of volunteers, men and women, with the following inscription: “Our bodies. Our futures, Our abortions.” Later, after 2:00 p.m., they marched to the Supreme Court building.

The call for the demonstrations, shared by seven organizations dedicated to the defense of civil rights, was made under the slogan “Bans Off Our Bodies”, which can be literally translated as “Out with the prohibitions of our bodies”, but which the Latin branch of the group’s most powerful partner, Planned Parenthood, a federation of reproductive health clinics with branches in 40 states, turned into a slogan in Spanish : “Enough of controlling us!”. In the march on Washington, the banners also displayed other messages, ranging from the classic (“My body, my choice” or “Abortion is medical assistance”) to the most imaginative, which included invitations to “abort the Supreme Court” and A quote from First Lady Eleanor Roosevelt: “Women who behave properly don’t make history.”

Arriving from Pittsburgh, Pennsylvania, Leann had poured all her “anger and grief” into a hand-drawn poster, which read: “Shout so that in a few years none of our sisters have to ask you at what point in history we lost our voice ”. Leann has explained that what has moved her to travel to the capital is her refusal “to be a second-class citizen, without full rights. Either we are all free, or we all regulate ourselves”, she added. Maya, 22, has since clarified that she is privileged: she lives in Washington, one of those progressive places where her rights are not in question. “I am afraid for the women of Texas or Oklahoma. I think they don’t realize that abortion will continue to exist, legal or not.” When asked if she has not yet lost hope, she replied that she trusts in the enactment of a law that protects abortion, so that it stops depending on legal fluctuations. This week, an attempt by the Democrats in the Senate has not even achieved the support of all theirs. Fifty Republicans and maverick Joe Manchin, a Democrat from West Virginia, voted against it on Wednesday.

A little further on was Joana, 26, a recent arrival from Texas, a state in which the so-called Heartbeat Law is already in force, which lowers the limit for performing an abortion from the current 23 weeks to six, which is when begin to feel the vital signs of the fetus. That amounts in practice to banning it. Joana has explained that in 2017 she underwent an intervention “that today would be impossible”. “Already then they put many obstacles in your way, such as the obligatory nature of ultrasound scans, or the time that has to pass between the consultation and the operation. Between one thing and another, I lost two weeks like that”, she explained.

The movement is especially mobilized since a draft of the verdict was leaked on May 2, written by conservative judge Samuel Alito and supported by a majority of five of the nine judges of the high court. At the same time of the night in which the filtration to the web was known Politicoa truly exceptional escape in the modern history of the institution, dozens of people, for and against abortion, gathered before the neoclassical mass of the Supreme Court until well into the morning.

The text that has become known is a first (and, for now, the only) draft, and it was written in February. It has been able to change since then. And it is still possible that there will be new versions before the final pronouncement. There is also the possibility that some of the apparently convinced judges will change their minds under the influence of Chief Justice John Roberts, a moderate Conservative who announced an investigation into the leak the day after it happened. “Today is an important day,” explained Gabriela Benazaracosta, from Planned Parenthood, at the Washington march. “It has to be clear that this draft is unacceptable and that it augurs a very important setback. Bans will only stop legal and safe abortion for the most disadvantaged people”

The concentrations have been reproduced every day since the filtration. In them, personalities have participated such as Democratic Senator Elizabeth Warren, who, visibly angry, improvised a rally in which she said “pissed off because an extremist Supreme Court thinks it can impose its extremist views on all women in this country, and he’s wrong.” So much turmoil proves that surely there is no judicial decision that confronts Americans more like the one in the case Roe against Wade. This week, the Capitol police have put up ten-foot-high black fences to secure the perimeter.

The protests have not only occurred before the Supreme Court. Since last weekend, groups of defenders of the right to choose have been rallying outside the homes of Judges Brett Kavannaugh, in the affluent neighborhood of Chevy Chase, in Washington, and Alito, who lives in the neighboring town of Arlington, Virginia, a state whose governor has requested federal intervention to protect them. Republican Senator Susan Collins has, for her part, denounced the people who have gathered outside her home in Maine to the police. Collins is one of two senators from her party (the other is Lisa Murkowski of Alaska) who opposes the Supreme Court overthrowing Roe.

In the face of growing controversy over the protests, which have often taken the form of vigils, writer Lauren Rankin published an article last Wednesday entitled: “After 30 years of turning abortion clinics into war zones, do you now ask for civility? ?”. Rankin is about to publish the book Bodies on the Line: At the Front Lines of the Fight to Protect Abortion in Americain which, based on her six-year experience as a volunteer escort at an abortion clinic in New Jersey, she dissects decades of harassment by the anti-abortion movement against reproductive centers, their users and their workers.

PlayOffs NBA 2022: Giannis Antetokounmpo’s useless exhibition: 44 points and a mate from another planet

PlayOffs NBA 2022: Giannis Antetokounmpo's useless exhibition: 44 points and a mate from another planet