Enraged elephant charges at a truck, rips off its bonnet and pushes the 2.5-tonne vehicle backwards


The moment an enraged elephant charges at a truck, rips off its bonnet and pushes the 2.5-tonne vehicle backwards while terrified driver cowers inside in South Africa

This is the terrifying moment a furious elephant charged at a pick-up truck and ripped off the bonnet with its tusks – leaving the driver fearing for his life.

Fuel supply driver Norman Nukeri, 47, had been travelling to a client’s lodge in Hoedspruit, South Africa, on June 1 when he was forced to stop his vehicle as a family of wild African elephants crossed the dirt track ahead.

Within minutes, Mr Nukeri was left fearing for his life when one of the elephants began to charge towards his Toyota and pushed the 2.5-tonne vehicle and its fuel-filled trailer backwards. 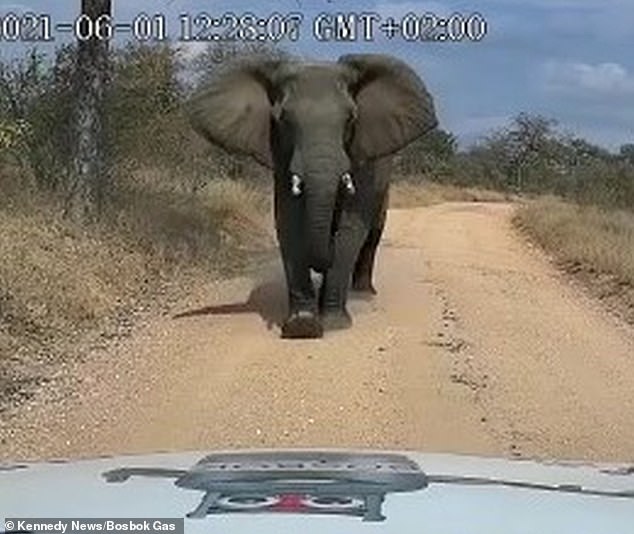 The elephant approaches Norman Nukeri’s truck as he travels to a client’s lodge in Hoedspruit, South Africa, on June 1 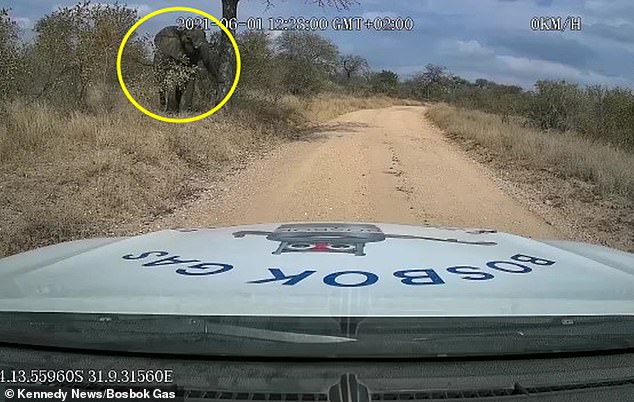 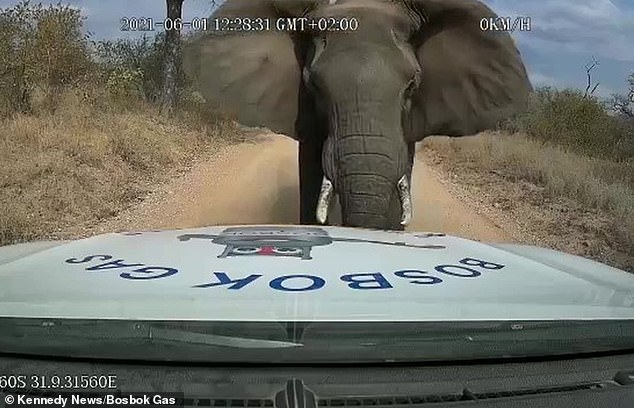 Dashcam footage shows the elephant striding towards the vehicle as Mr Nukeri bangs on his door in an effort ward the creature away.

The animal appears to back up and disappear over the other side of the road – but it quickly returns and charges the vehicle head-on.

The bonnet immediately crumples on impact as the elephant pushes the large vehicle and its fuel-filled trailer backwards, while footage inside the car shows Mr Nukeri frozen with fear.

Following the scenes, the shell-shocked driver said he was too scared to leave the vehicle and only felt safe once rangers from the Klasirie Private Nature Reserve arrived.

Mr Nukeri, who is back on the same route today, said: ‘I stopped when I saw the elephants in the distance then the other one appeared from my left. I hit the truck and it went away so I was relieved but then it came back again.

‘It came straight at me and pushed the truck. I just thought to hold the brake and pull the handbrake up. I was so scared. I didn’t move because I was just in shock.

‘I thought it could have been a life-threatening situation. I was scared that he was going to push the truck into the river. I didn’t know what was going to happen to me. I was fearing for my life. 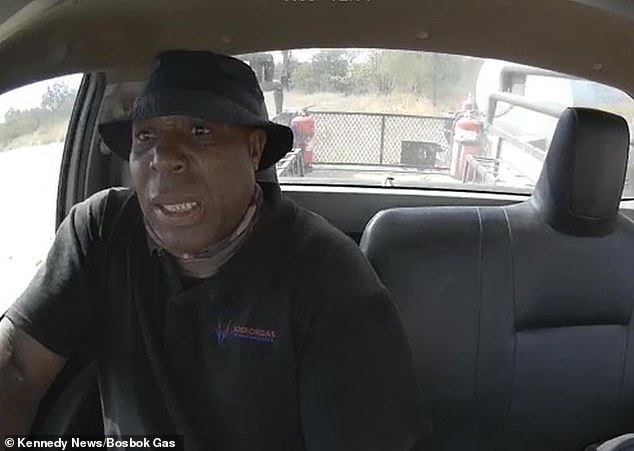 Fuel supply driver Norman Nukeri, 47,  holds the brake and pulls the handbrake up as the elephant pushes his truck 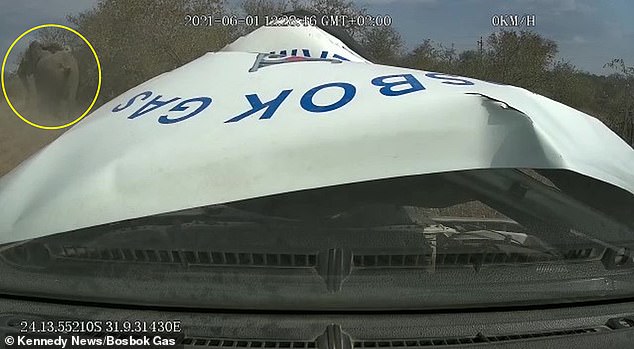 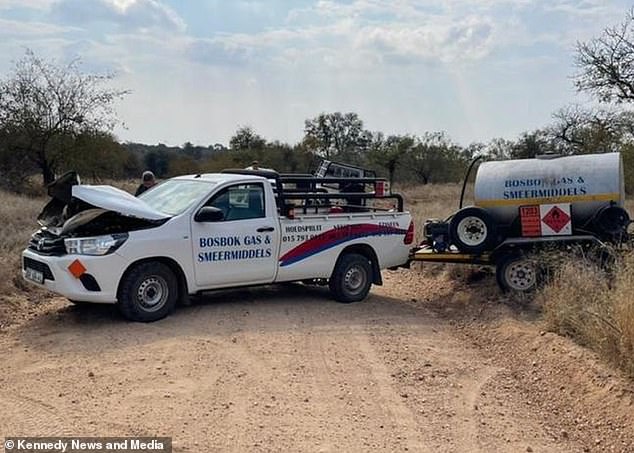 ‘I was worried that it was going to come back again so I called the office and didn’t want to get out of the vehicle. I only felt safe when the rangers came. I was so relieved.

‘I’m happy it’s over, but I’m going back to the same spot today. I’m going to drive the big truck instead though. I’ll be very wary from now on.

‘It’s a one in a million thing to happen. I don’t think many people have experienced that. I was in the wrong place at the wrong time.’

Following the encounter, images showed the damage to the vehicle’s bonnet and rear, which Bosbok Gas’ marketing and operations manager Nathan Traut claims will cost around £750 to fix.

Mr Traut expressed his relief that his ‘top driver’ had survived unscathed and added that the company director even took him for drinks after the incident to calm his nerves.

He said: ‘We’re very relieved he’s OK because he’s our main driver! When he called he was very out of breath. We went to fetch him after the incident, but Norman didn’t drive.

‘When you look at the video of him in the truck and you look at his T-shirt you can see his heart pounding. He was shell-shocked for a day or two afterwards.

‘When we came back to town the director took him out and had a couple of drinks with him to relax.’

French Open 2021: Serena Williams advances to fourth round as draw opens up

David Archuleta mentioned 'asexuality' in his coming out post. What is that?

Dallas Stars defenseman Stephen Johns, who has dealt with post-concussion syndrome, has retired from the NHL...

David Archuleta mentioned 'asexuality' in his coming out post. What is that?