Glamorous racegoers basked in the sun today as they arrived for Derby Day at Epsom Downs racecourse in Surrey.

Making the most of the hot weather, the early arrivals sported their stunning summery frocks and elaborate hats for the day of festivities.

Keeping Covid-safe with mandatory face masks, one arrival picked a silky blue gown and oversized fascinator to cheer on the horses, while another boldly opted for an all-white look.

The event is usually attended by the Queen, who this year has decided to skip her trip to the Epsom Derby because she fears it won’t be the same with Covid restrictions in place, reports suggest.

Instead, the monarch, 95, will watch the famous race on television from the comfort of Windsor Castle, according to the Telegraph. 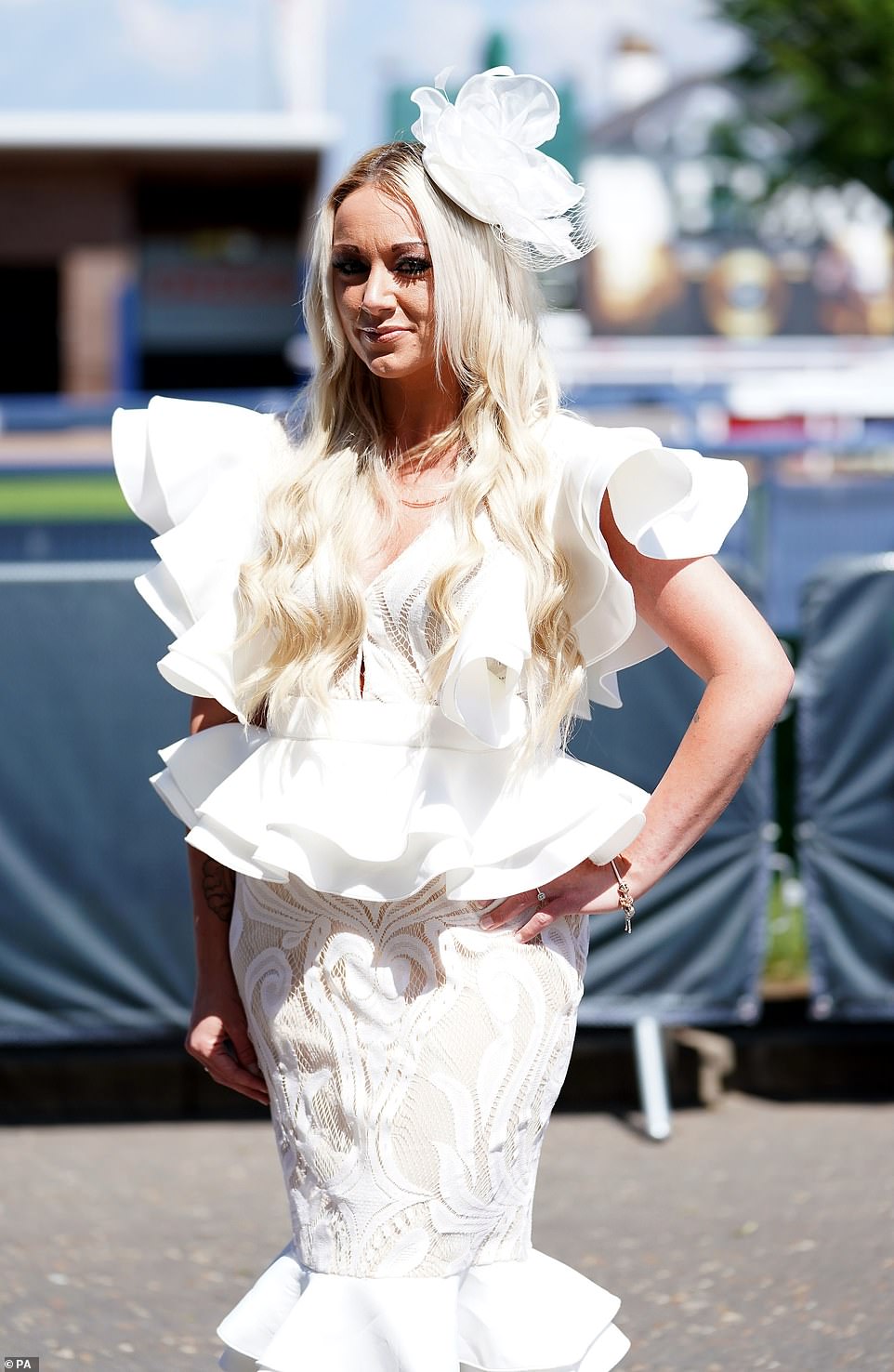 It’ll be all white on the night! One racegoer sported a lace and tulle number bold opting for one of the summer’s most daring trends 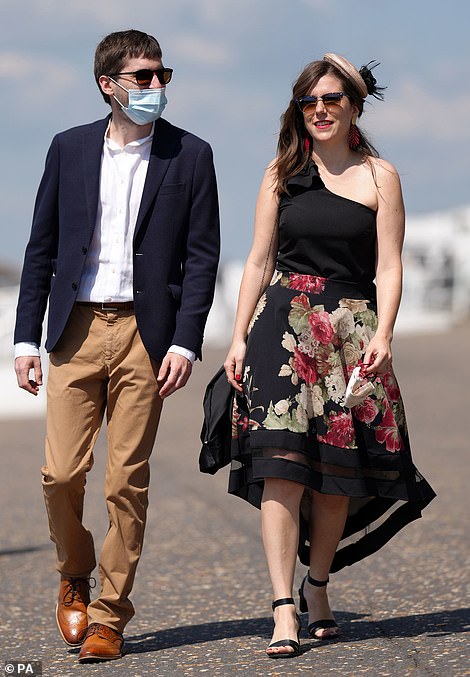 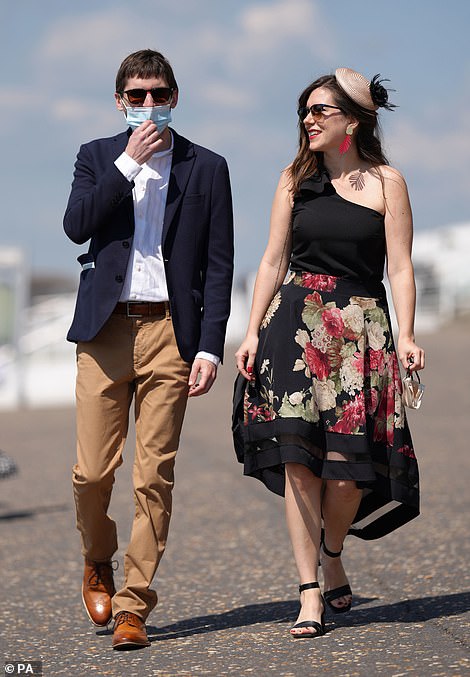 Dressed to the nines! One couple dressed up as a girl sported a flower print skirt and one shoulder top while her male companion opted to go smart casual in brown chinos and an open-collar shirt 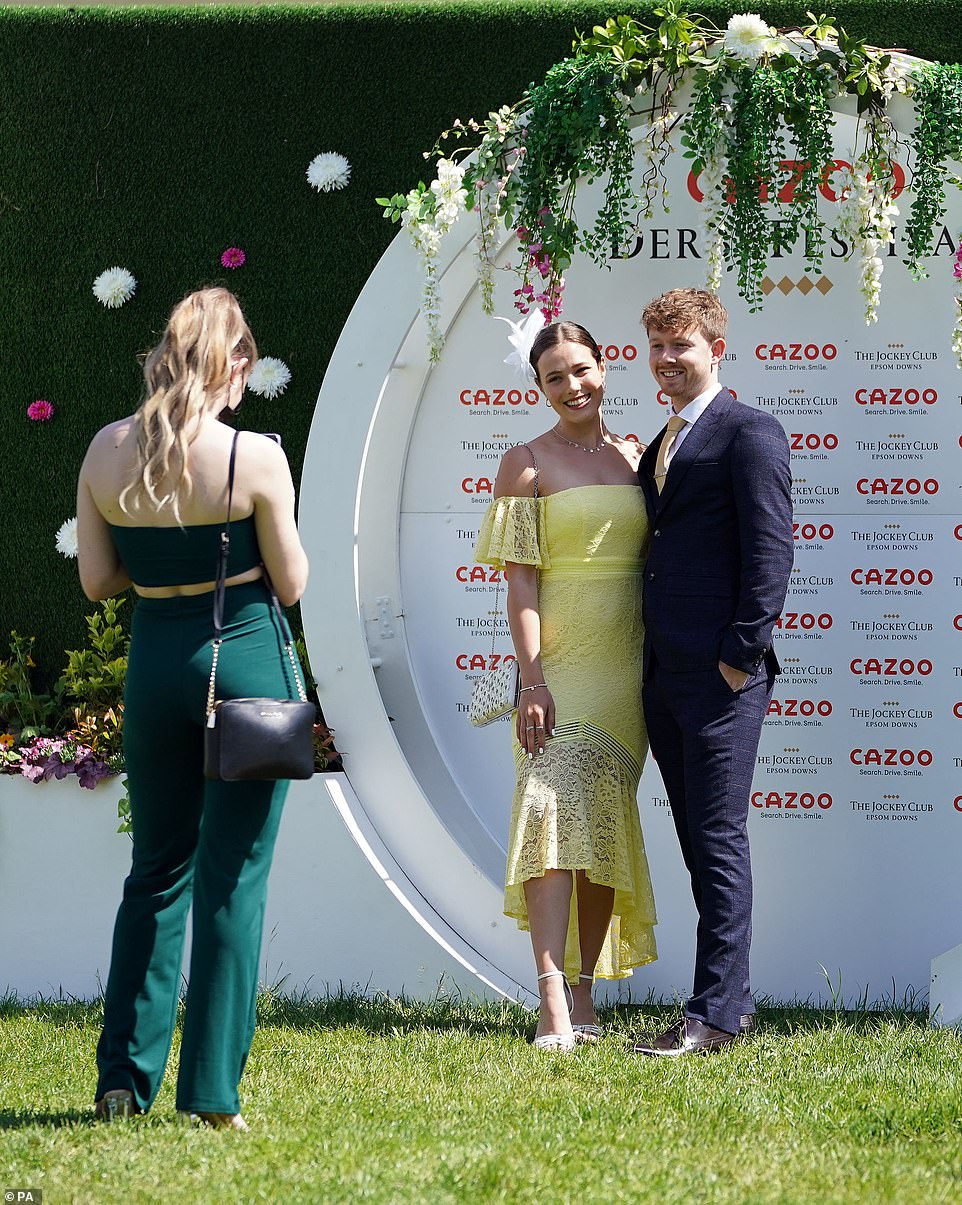 Sunny and chic: One racegoer looked stunning in a bright yellow dress as she joined a companion in a slick navy suit 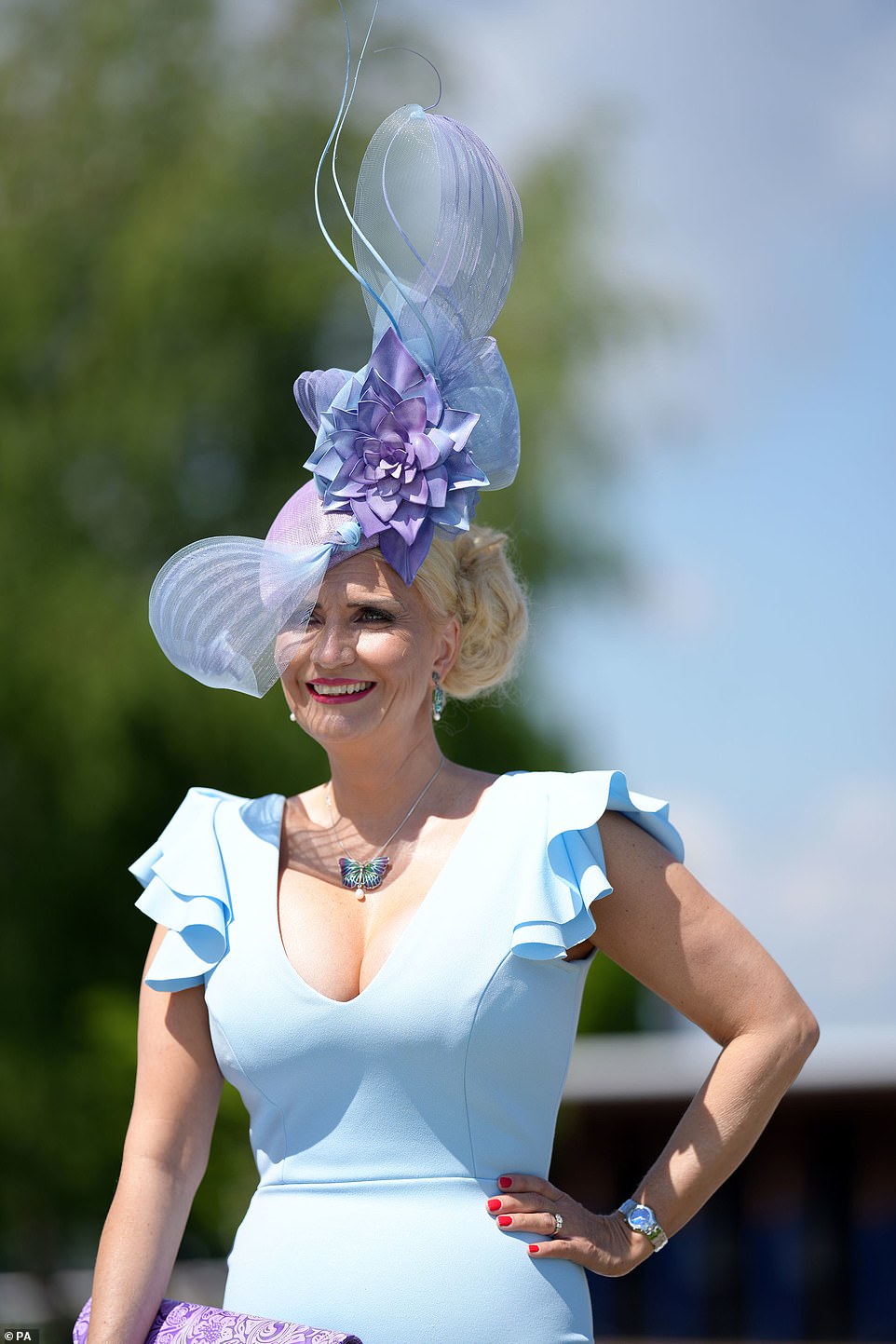 Beautiful in blue! Another racegoer opted for a baby blue number with a clashing red nail for the festivities in Surrey 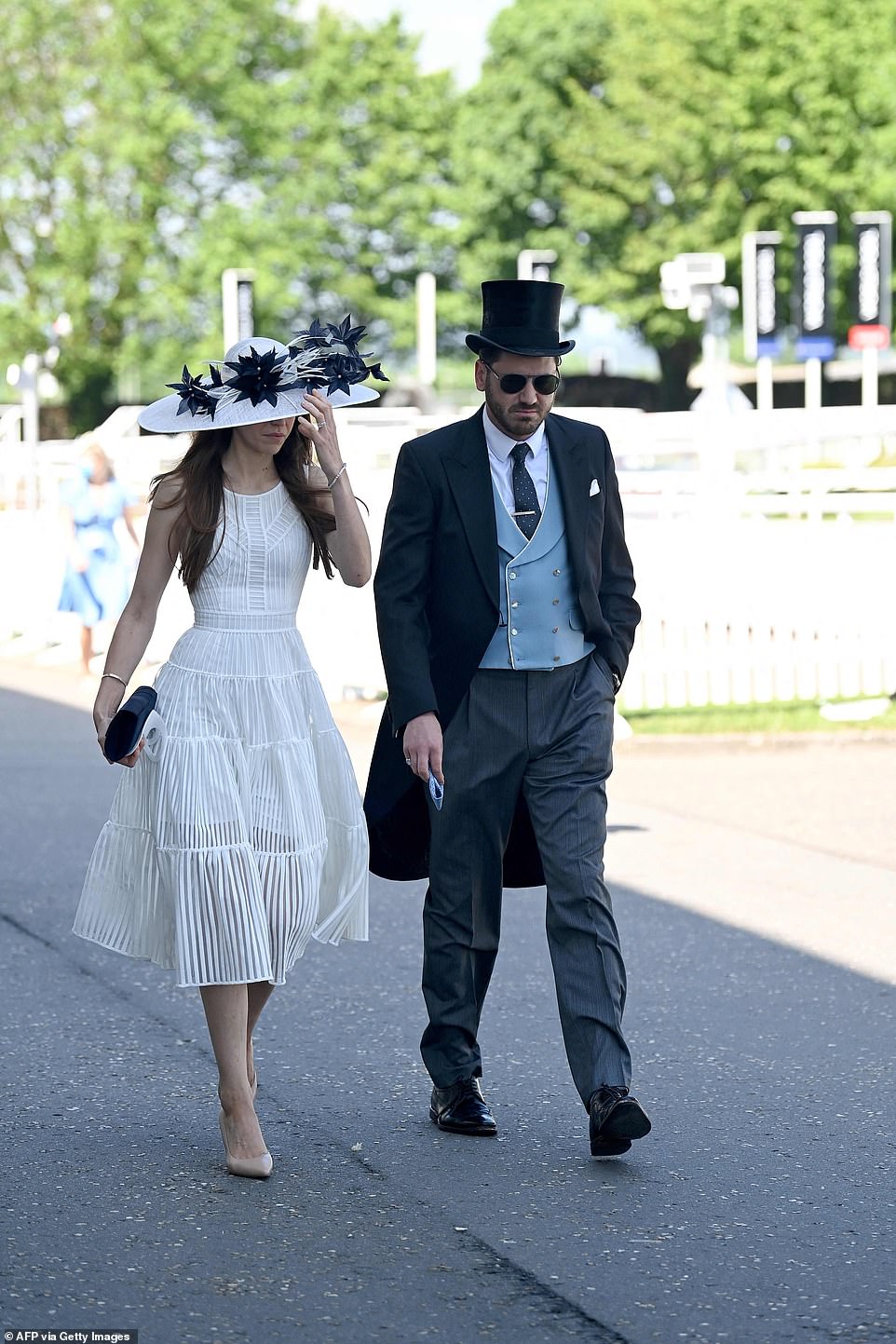 Monochrome memo: One racegoer looked stunning in a structured white summer dress with a cinched waist and oversized hat while her partner opted for a waistcoat and top hat 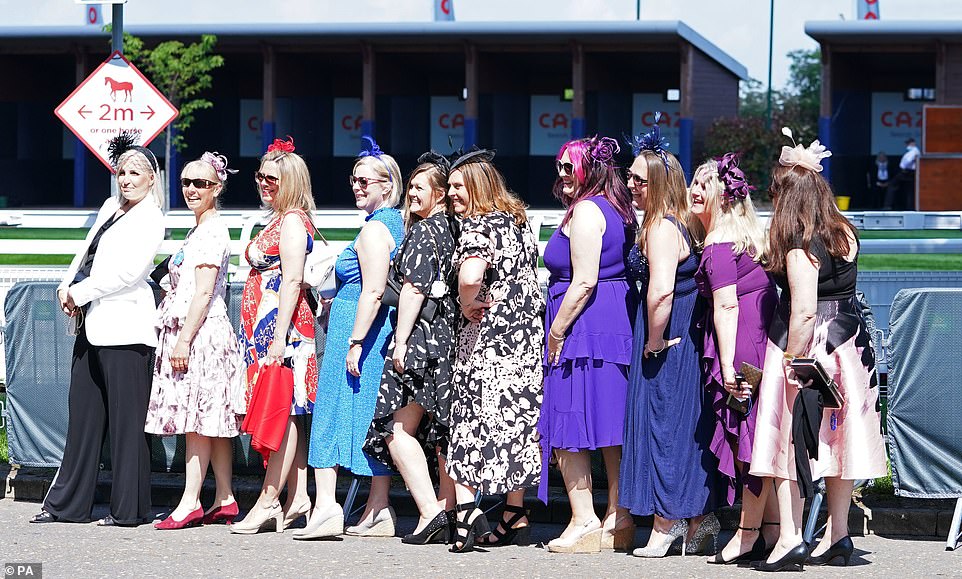 Towering heels and purple shades! This group sported purples, reds and black with high heels for the Derby day out in Surrey 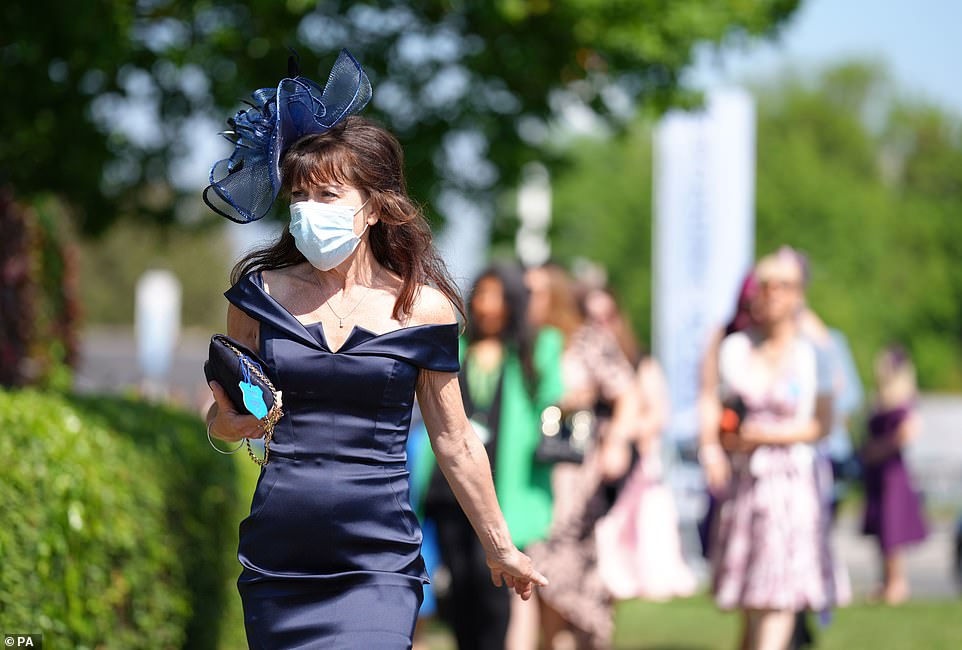 Making the most of the hot weather, the early arrivals sported their stunning summery frocks and elaborate hats for the day of festivities. Keeping Covid-safe with mandatory face masks, one arrival picked a silky blue gown and oversized fascinator to cheer on the horses 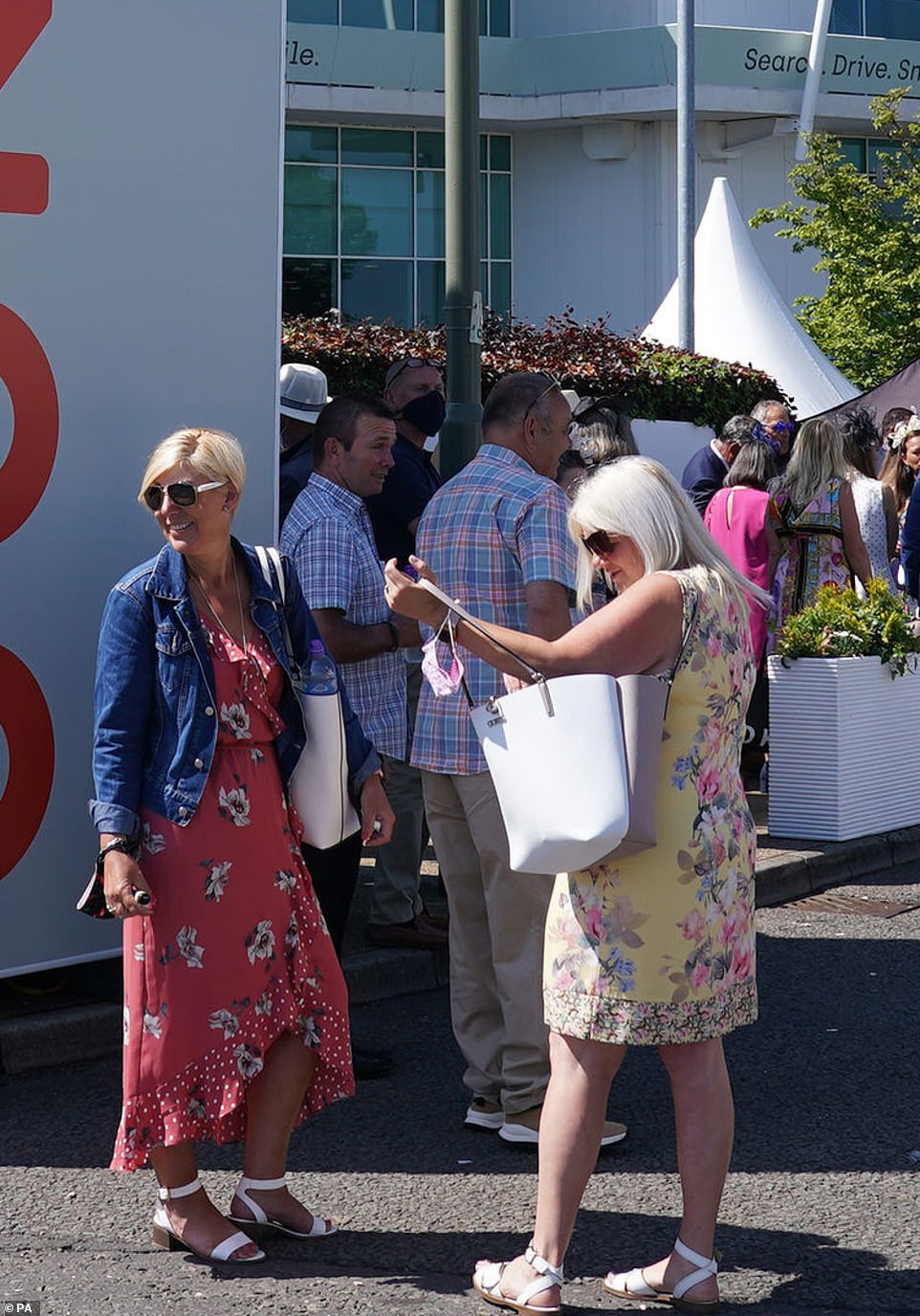 It will be for just the fourth time in 75 years she misses the day.

The monarch also missed the 1984 Derby, when she was in France for a D-Day anniversary and in 1956, when she made a state visit to Sweden.

Elaborate headwear was the order of the day for many, with oversized hats and flamboyant fascinators adorned with feathers, flowers and frills spotted in the enclosure.

This year the The Style Awards is open to both males and females, and seeks out to find the very best dressed racegoers on the course.

Among the top prizes include a year’s supply of dresses from Chi Chi London, a year’s supply of shirts from Charles Tyrwhitt, Jeroboam of Moët & Chandon and an exclusive Jessica Rea Headpiece, plus a personal styling consultation.

It is therefore of little surprise racegoers were keen to pull out all the stops when it came to their looks, pushing the boundaries with outfits that were both creative and elegant. 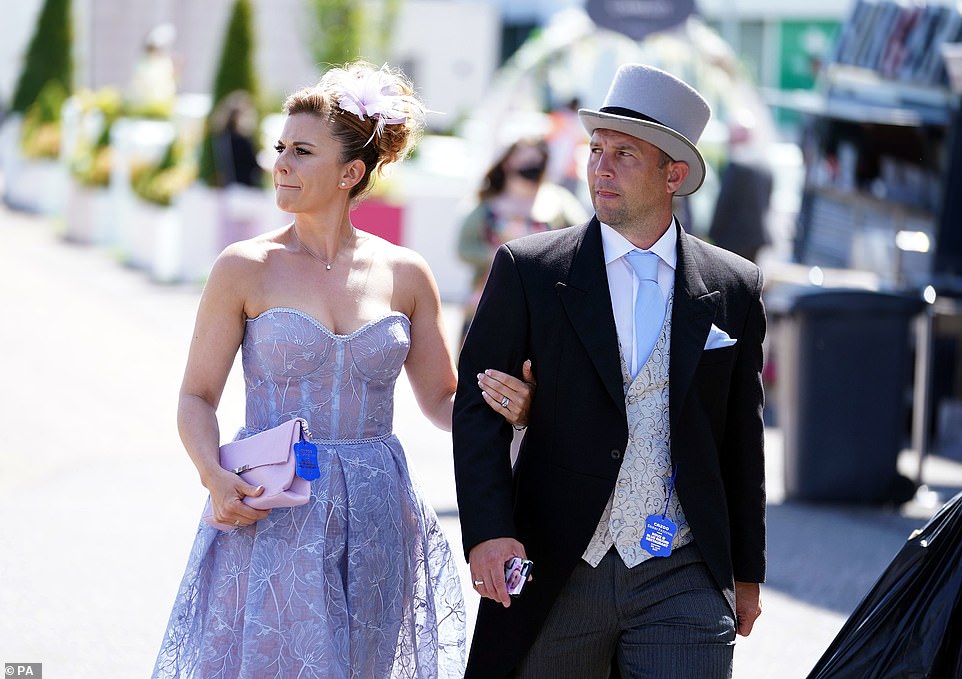 Purple perfection: Another racegoer opted for a lace sheet strapless number and pink clutch bag which while her partner sported a baby blue tie 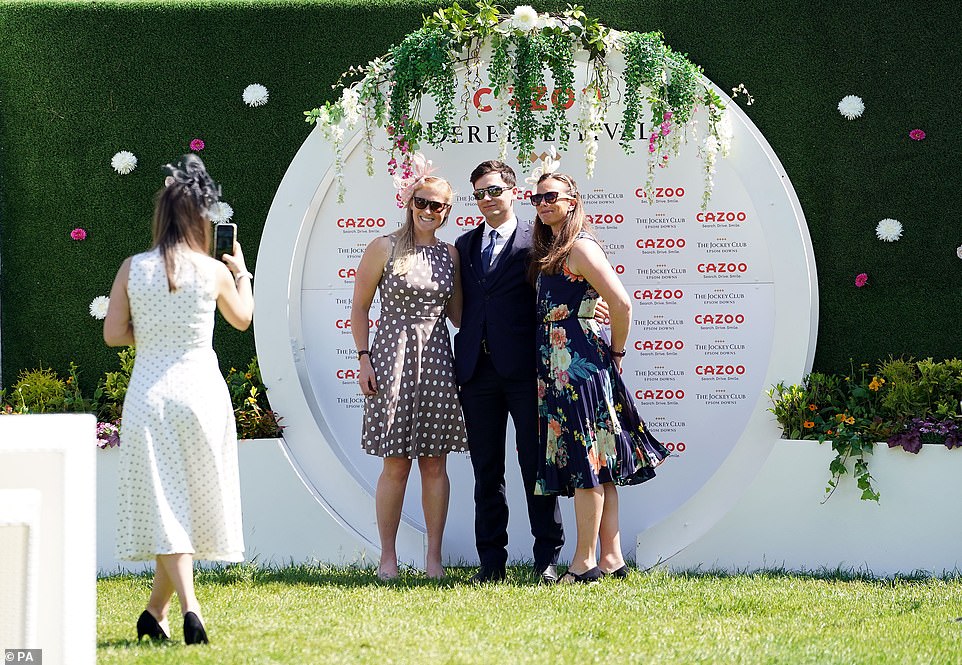 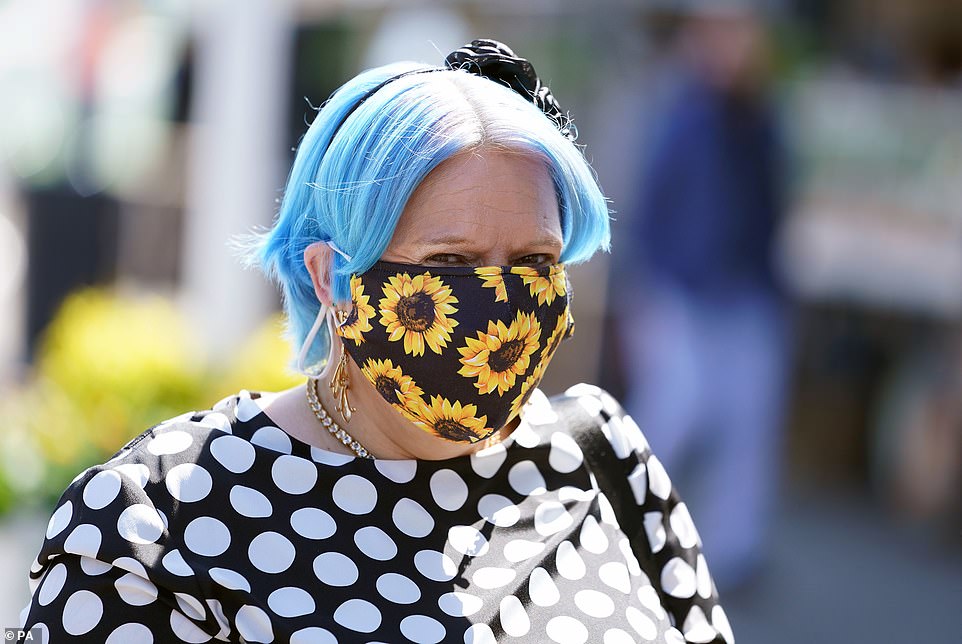 Flowerly fun! One racegoer opted for a bold sunflower print for the sunny day out which she paired with a black and white dress 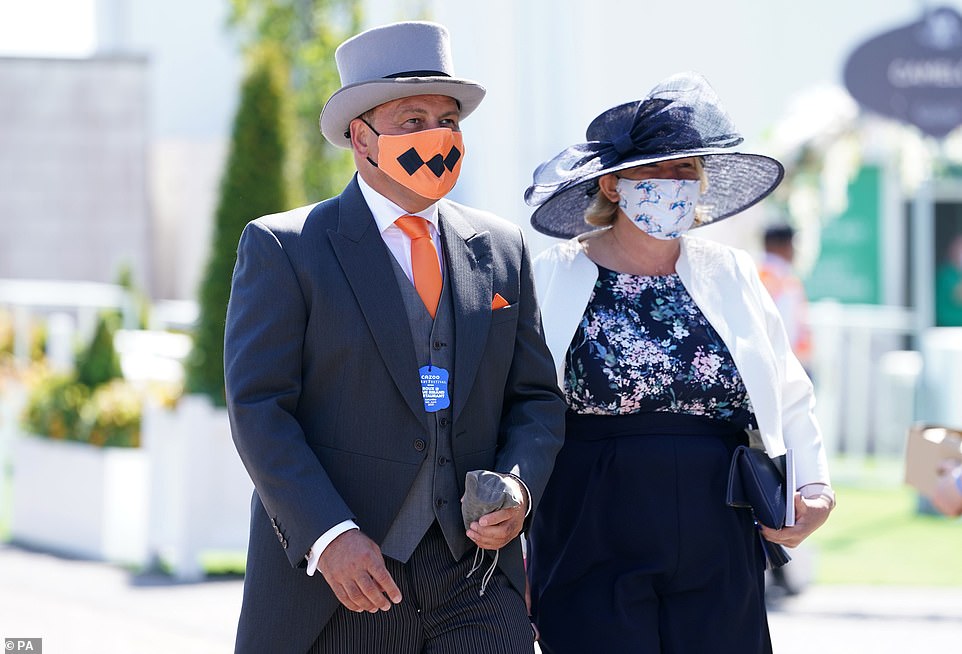 Coordinated chic! One gentlemen opted for an orange facemask with matching tie as part of his three-piece suit while his partner teamed up a navy outfit with a silky face mask 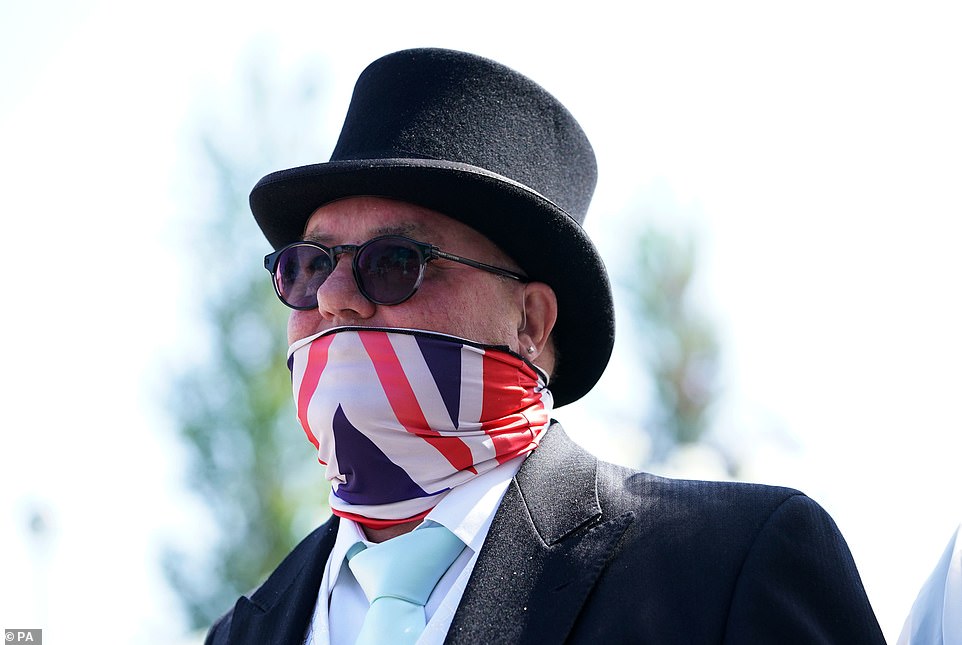 Patriotic dressing! Another racegoer sported a Union flag face mask and top hat for his big day out 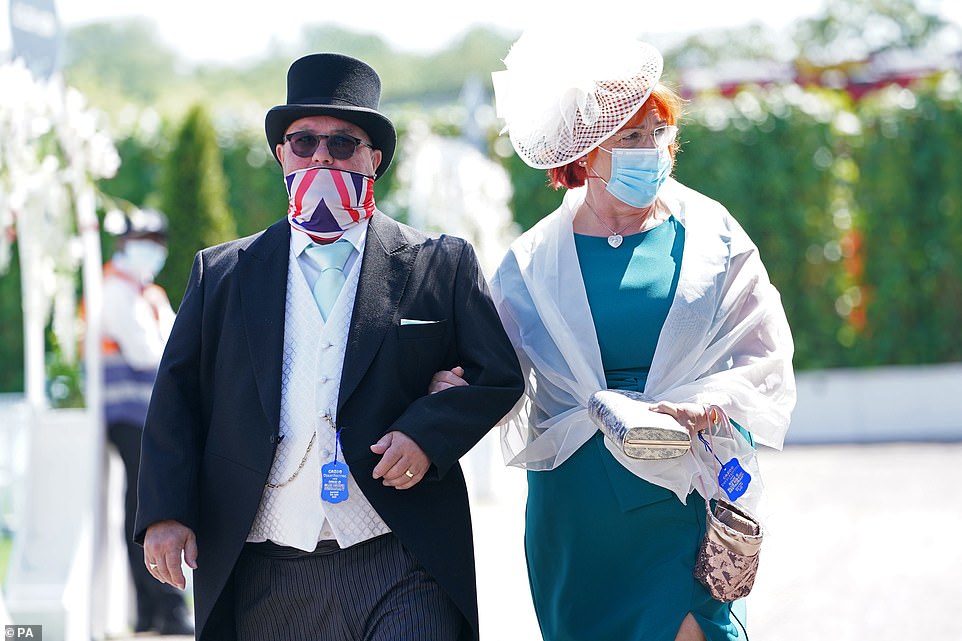 Bit of all white! One woman sported a white shawl and matching fascinator while her partner opted for Union jack mask

Popular cold-shoulder and strappy dress styles allowed many women to flash a hint of skin without putting too much on display.

Many donned frocks in vibrant hues of pinks and reds, while some opted for softer floral floral patterns.

Others bravely channelled one of the season’s other big style trends – head-to-toe neutrals – and donned dresses in daring shades of white and beige – despite the muddy and stormy weather.

Others instead went for a more casual look with chinos and open-collar shirts. 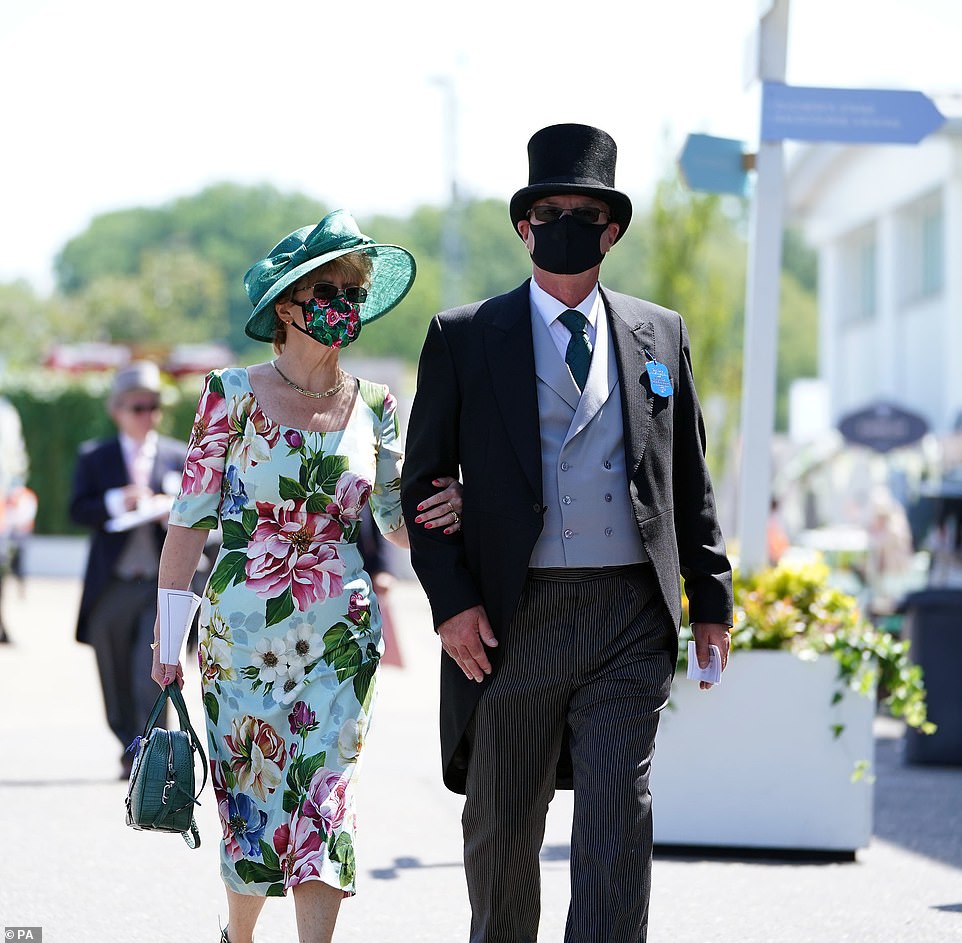 Blooming gorgeous! Another racegoer opted for a floral print number with a green hat and coordinating face mask 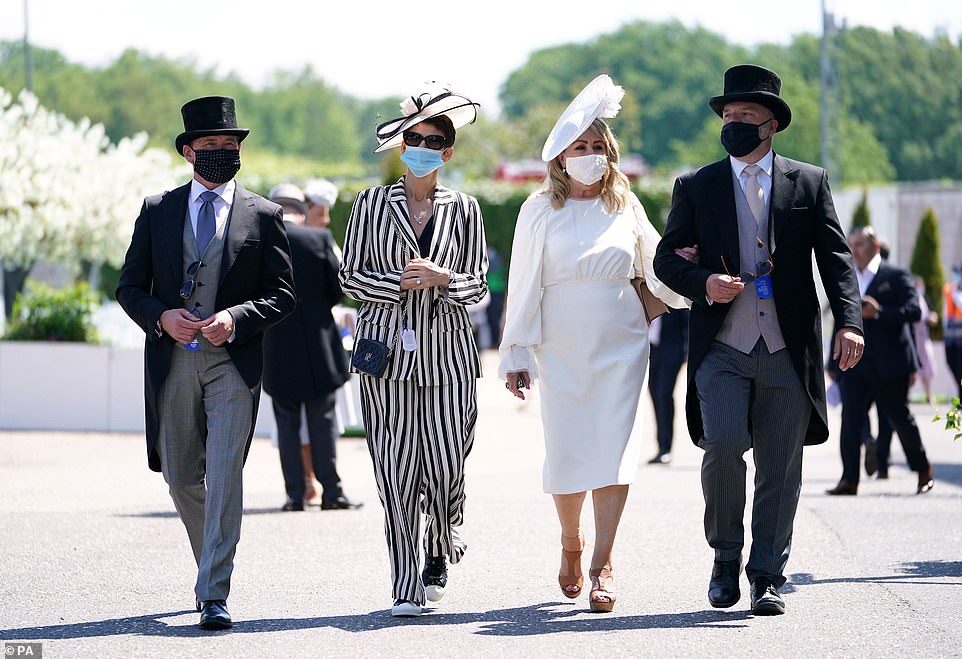 Monochrome magic! One racegoer kept it cool in a black and white print suit while another went for an all white number 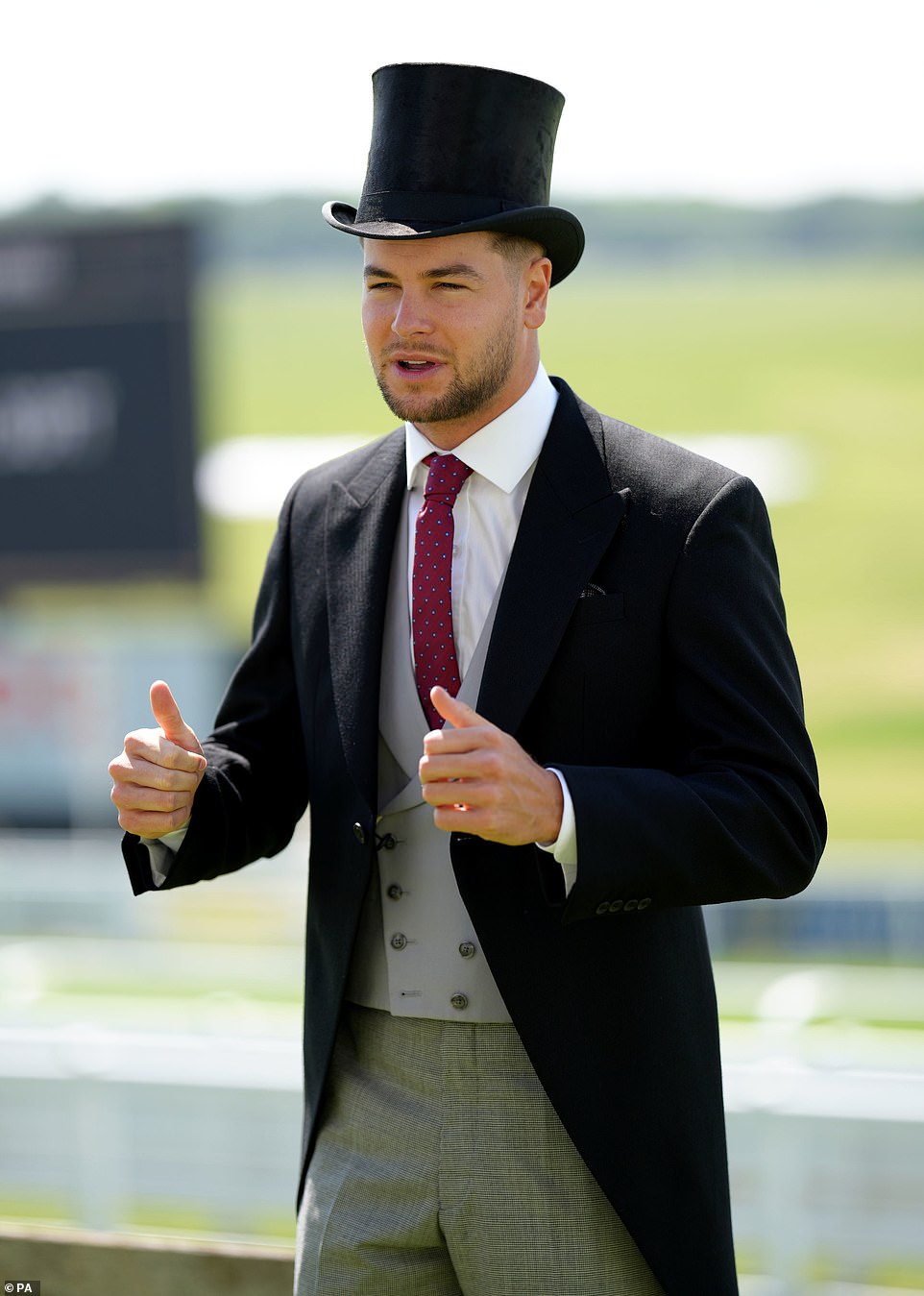 Today is the second of two days of racing at Epsom Downs and is Derby Day, one of the biggest occasions of the summer calendar

Bolshoi Ballet is the punters choice to give trainer Aidan O’Brien a ninth Epsom Derby and a 41st British classic breaking a record that has stood for almost 150 years later on Saturday.

However, it is John Leeper, a horse named after the late two-time Derby winning trainer John Leeper Dunlop and trained by his son Ed who may well attract the more romantically-inclined punters.

Only 12 go to post with O’Brien surprising many by just running Bolshoi Ballet – it is the first time he has had just the one runner since 2004.

‘We knew he was a very special horse last year and he’s done everything we have asked of him,’ O’Brien told ITV.

‘The Derby means everything it is the pinnacle of a horse’s career and the ultimate test of balance, courage and stamina.

‘There are many different aspects and twists and turns which can affect the mentality of the horse even before you get to the start.

‘Galileo (the sire/father of Bolshoi Ballet and who won the 2001 Derby) for me was the ultimate racehorse.’

Held at Epsom Downs Racecourse in Surrey, the Derby was first run in 1780.

This year’s event will be restricted due to Covid. The famous hill, where up to 100,000 people normally stand to watch the race, will be closed.

And the ticketed area will be limited to just a quarter of its usual size.

But that – and a deluge of rain – did little to put of thousands of glamorous racegoers who flocked to Epsom Downs for Ladies’ Day yesterday.

Arsonist, 19, avoids jail after torching two buildings when dared by a friend

Covid-19: Do I have to be vaccinated?

The Melbourne Storm have scored a staggering 12 tries as they embarrassed the Wests Tigers 66-16 on...