A physiotherapist who specialises in erectile dysfunction has revealed how many men don’t realise a strong pelvic floor is essential for a healthy sex life.

Rosemary Lillie, 66, established the West Wimbledon Physiotherapy Clinic in 2003 after working both in the NHS and private practice and estimates she has helped ‘hundreds’ of men find sexual satisfaction.

She sees up to five male clients a week since she began to focus solely on male fertility issues a decade ago, including some who have never had sex before.

As well as treating men for issues with their ability to perform in the bedroom, she is also an expert in Peyronies disease, or the curving of the penis when it’s erect, caused by a build-up of scar tissue.

Rosemary helps the majority of her patients by improving the strength of their pelvic floor – a part of the body many men are unaware they even possess. She also uses shockwave, laser, manual therapy and acupuncture.

Here you can find the review of Bluechew, to find out is that better than Viagra or not. 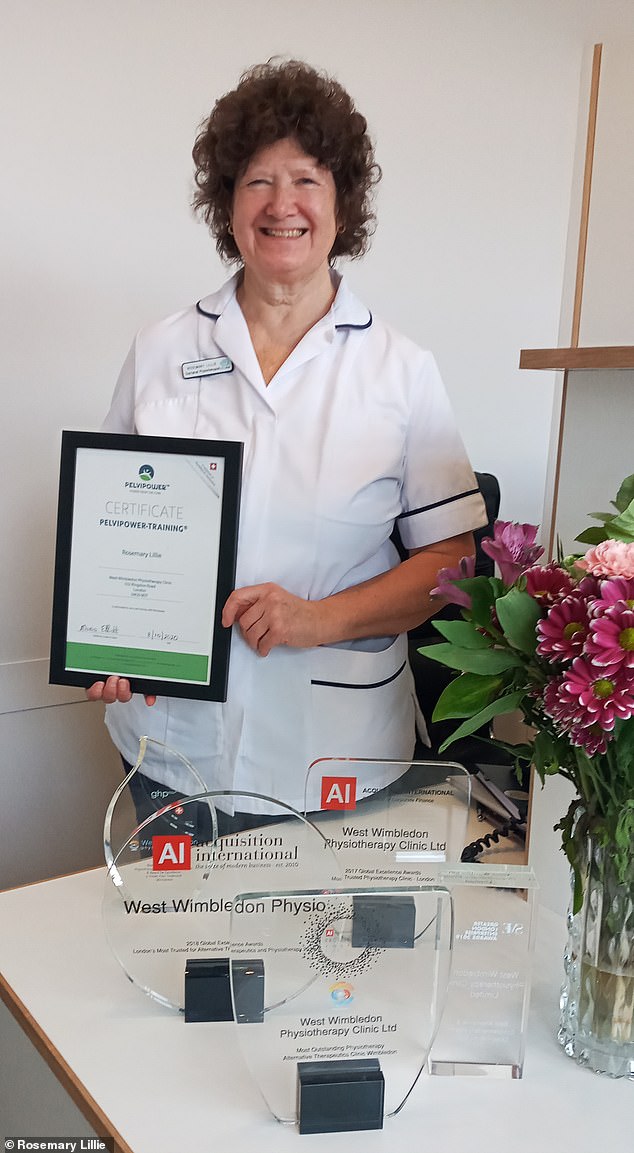 She told FEMAIL: ‘Some of the men who come to me have never had a sex life before. Being a man and not being able to get an erection means you can’t have sex and that can be incredibly distressing.

‘There can be tears and some do pour their hearts out to me. We always have a box of tissues at hand in case men need them.

‘Sometimes I go home drained emotionally, but it’s comforting knowing I can help.

‘Some men use humour to get them through it and to mask their pain, so you do get a few occasions when a patient will remove their trousers and say, “I bet you’ve seen a few of these in your time?” I have to say, “Well, yes I have”.’

Those who suffer from erectile dysfunction are treated using either shockwave, laser therapy or with a state-of-the-art £50,000 PelviPower chair, which boosts the pelvic floor muscles by delivering a frequency of 25hz to 50hz, which is the optimal muscle contraction.

She added: ‘The shockwave and laser treatments improve the blood flow to the penis, so I tend to find that people will comment after the first treatment that it is already better.’

After an initial discussion, Rosemary carries out a physical examination on patients which involves an assessment of the pelvic floor and a review to decide on treatment options.

Rosemary said: ‘The method of obtaining an erection is that the penis contains spongy material, and blood is forced into it which causes the penis to become erect. 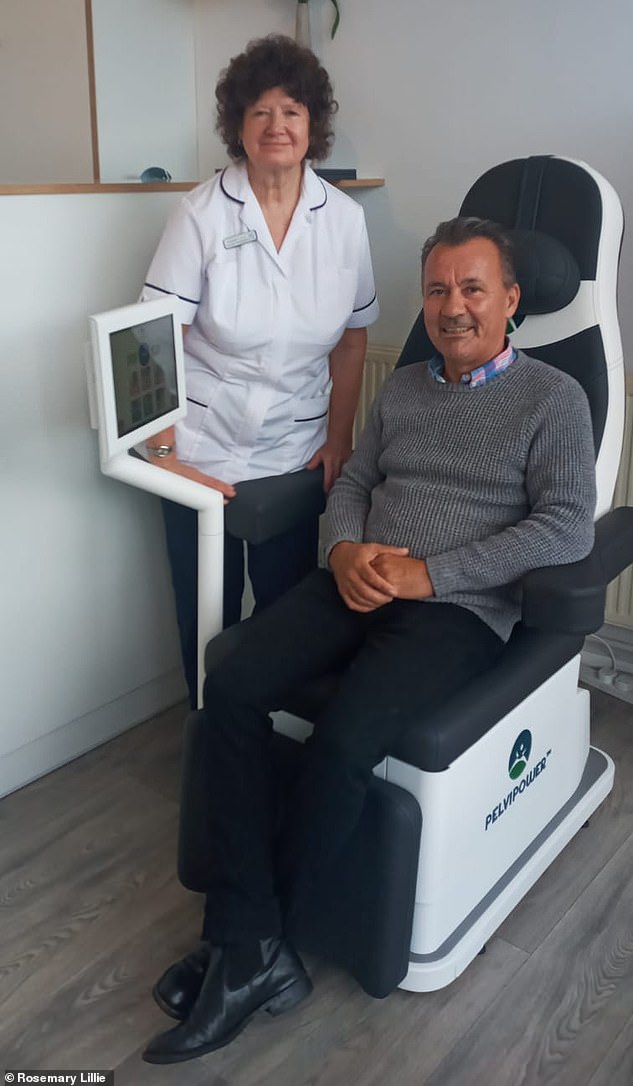 Rosemary, who also treats female incontinence, decided to focus on males as she became aware there were very few practitioners helping men. Pictured with one of her patients

‘You have surrounding muscles which help with the erection. If you have a strong pelvic floor you have a much better chance of that erection lasting.

‘Because I am experienced, I know what a good pelvic floor should feel like. You have to feel between the anus and the back of the testicles, that’s where the pelvic floor is.’

A 15-minute session in the PelviPower chair is the equivalent of doing 11,000 Kegel exercises.

Andrew*, 47, from Milton Keynes, Bucks., has just completed a course of treatment with Rosemary. He said: ‘Erectile dysfunction had a big impact in terms of my confidence, and the resultant stress affected my personality, made me grumpy, resentful and probably less lovable to be around.

‘Ultimately, my wife and I separated and divorced. I strongly believe ED was a major part of the cause of that.

‘I tried self-hypnosis and meditation, and, as my ED started as a result of having treatment for prostate cancer, I was prescribed Cialis (Taladafil) which does work, but not so well if your confidence is low.

‘Following my treatment for the cancer, I had a urinary tract infection which developed in Peyronies disease and resulted in a slightly deformed and shortened penis.

‘This had two effects: one it further dented my self-confidence, and two, it was painful and made intercourse painful, as a result.

‘The shockwave therapy I underwent with Rosemary has definitely improved matters to the point where erections are more natural and frequent, and my penis has straightened noticeably. Sex is much, much better now.’

*Names have been changed

Because the pelvic floor is muscle, its task is to tighten, relax and to create a counterpressure in case of a pressure increase, such as sneezing. The extracorporeal shockwaves it delivers is the production of low frequency acoustic pressure waves.

Rosemary, who is a lifelong Crystal Palace fan and spent a spell as a physio at the club in 1989 and 1990, while Steve Coppell was manager, says most men are clueless they even have a pelvic floor and so are unaware of the part it plays in their love lives and physical wellbeing.

She added: ‘It’s interesting most women have a good idea of their pelvic floor while most men don’t, so if you ask them to exercise their pelvic floor, they will just look at you and say they have no idea where to start.’

Rosemary points out lifestyle can also affect the male pelvic floor. So men who don’t do a lot of exercise and instead sit down a lot are likely to have a weak pelvic floor.

But if you are generally fit and healthy and exercise your pelvic floor will be fine as anything that involves core muscle work will help build up the pelvic floor.

Rosemary has a collection of cards from happy customers and often bouquets of flowers arrive from men whose lives she has changed for the better.

She added: ‘I love my job very much. I love helping people. That is why I went into it in the first place.

‘There is so much I can do to help men who have erectile dysfunction and all sorts of other things.’

Rosemary is currently treating a male who suffers from Peyronies disease. The condition creates scar tissue in the shaft of the penis which makes the penis bend and so it is quite painful to achieve an erection and to have sex.

She added: ‘We are working on that scar tissue and he tells me he now wakes up every morning with a good spontaneous erection as he used to do in the past.

‘And he can now achieve an erection very comfortably and when he has sex with his partner it is no longer painful. After his first course of treatments he said he noticed a difference.’

Rosemary has treated men of all ages over the last 10 years, with the oldest being a 72-year-old.

She said: ‘Age isn’t really an issue. Look at Ronnie Wood, he’s 73 now and had twins four years ago!’

Rosemary, who also treats female incontinence, decided to focus on males as she became aware there were very few practitioners helping men.

She added: ‘Typically, I see around five men per week. I am currently treating someone who is 67, but that’s not unusual.’

Rosemary said she finds it very rewarding being able to help, and explained that while some men prefer to be treated by another man, there are no hard and fast rules on it.

‘I think some people are happier talking to someone older, more experienced and not threatening,’ she added.

‘Many men may feel embarrassed talking to a young female doctor or physio.

‘It is not the sort of thing men talk to other men about. You are never going to admit you have problems with an erection, are you? So, the fact they can talk to somebody who is a professional who can help them can only be a good thing.’

Rosemary said she believes the number of men she has treated is in the hundreds.

‘By the time they get to me they have researched the subject and realise they’ve got a problem. A lot of them have tried Viagra but there are drawbacks with that,’ she said.

‘With Viagra you have to decide when you want sex and plan it. Then you have to take it a certain amount of time in advance.

‘And if you’re unlucky your erection can actually last for hours, which may sound fantastic to some, but it actually isn’t. It can be quite awkward, so it takes the spontaneity out of it.’

‘The internet has given people a lot more they can explore and look up things that will help them,’ she said.

Erectile dysfunction, also known as impotence, is when a man is unable to get or maintain an erection.

It is more common in the over-40s but affects men of all ages.

Failure to stay erect is usually due to tiredness, stress, anxiety or alcohol, and is not a cause for concern.

However, it can be a sign of an underlying medical condition such as high blood pressure or cholesterol, side effects of medication, or hormonal issues.

Lifestyle factors than can affect the condition include obesity, smoking, cycling too much, drinking too much, and stress.

Algorithm could help ‘share the load’ of ICU beds and support up to 1,000 Covid-19 patients

Algorithm could help 'share the load' of ICU beds and support up to 1,000 Covid-19 patients