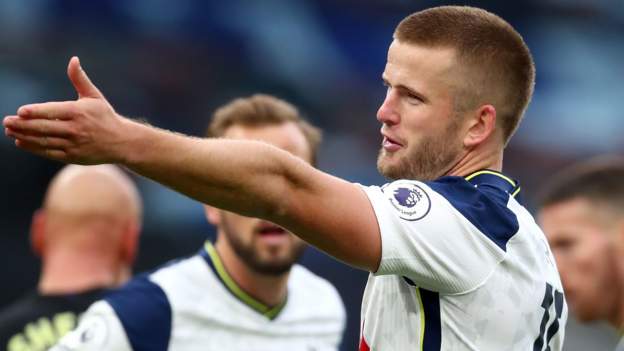 The new handball rule is a “massive problem” and “something has to change”, says Tottenham defender Eric Dier.

England international Dier, 26, conceded an injury-time penalty against Newcastle last Sunday after being adjudged to have handled the ball.

Dier had his back turned as Andy Carroll’s knock down came off his arm, allowing Callum Wilson to score a 97th-minute equaliser in the 1-1 draw.

“Everyone is on the same page, something has to change,” said Dier.

With Spurs heading for victory, Jonjo Shelvey floated a free-kick into the area which substitute Carroll nodded down but the ball came off Dier’s outstretched arm as he jumped to make a challenge.

Following a lengthy consultation with the video assistant referee, on-field official Peter Bankes awarded the penalty after reviewing the incident on the pitch-side monitor.

Dier told Football Focus: “In my case, if you look at it as a whole, the foul leading up to the free-kick, the distance between me and Andy Carroll, the fact that I get pushed in my back which people are not really talking about.

“The push in my back is what makes my arm go up, that is a completely natural reaction and if someone does touch you like that, your normal reaction is to go like that.

“Even without the push, he is less than a metre behind me and I don’t really know what more you can do.

“You cannot jump without your hands, you cannot defend without using your arms to balance and move so it is what it is.”

At this stage last season there had been no penalties awarded for handball in the Premier League.

So far this term, six penalties have been awarded for handball compared to 19 in the entirety of the last campaign – and managers have have been outspoken on the issue.

Roy Hodgson said the “nonsense” handball law that led to a penalty against Joel Ward in Crystal Palace’s 2-1 defeat by Everton was “ruining the game”, while Liverpool boss Jurgen Klopp said Dier “did not do anything wrong”.

Manchester United manager Ole Gunnar Solskjaer said Dier had “no idea the ball hits him” and that the handball rule previously “seemed simpler”.

Steve Bruce’s Newcastle were outplayed for the majority of the game with Spurs and scored with their only shot on target. The Magpies manager said afterwards that football has “lost the plot” with the new interpretation.

Dier said of Bruce’s comments: “That pretty much sums it up. I don’t really know what I can possibly add to it. In football, for everyone to have the same opinion is very rare. That seems to be the case [here].

“It is a massive problem, not just mine – there were many last weekend.”

You can listen to the interview in full on Football Focus on Saturday at 12:00 BST.

What is the new law?

A new interpretation of the handball law was introduced at the beginning of this season. Under these new rules, a player will be penalised for handball if:

GameStop winners and losers: Small Reddit investors are up while hedge funds face $19B in losses

Woman who sprayed her hair with Gorilla Glue finally has it removed during $12,500 procedure