The European Space Agency (ESA) has released a sequence of images of Venus, taken by its Mercury-bound BepiColombo spacecraft.

BepiColombo swung by Venus and captured its first glimpse of our immediate planetary neighbour, which appears as a tiny circular blob, just visible beneath the craft’s instruments.

The flurry of black-and-white snapshots were taken between 7:58am and 2:57pm BST on Wednesday, corresponding to a distance of approximately 372,000 to 248,000 miles from Venus.

The British-built craft, which launched in 2018, is now adjusting its course on the way to Mercury, the solar system’s smallest and innermost planet, which it should reach by December 2025.

The BepiColombo mission is named after the Italian mathematician and engineer Giuseppe (Bepi) Colombo (1920–84).

Its seven-year journey is a joint mission between the ESA and the Japan Aerospace Exploration Agency (JAXA).

One piece of equipment on board, the Mercury Imaging X-ray Spectrometer (MIXS), was built by the University of Leicester and funded by the UK Space Agency.

It will work alongside a second spectrometer called SIXS to analyse surface composition via fluorescent X-rays when it arrives at Mercury in December 2025.

BepiColombo has a range of complex equipment to help study Mercury, but also has three cameras attached to the hull of the spaceship, which provide black-and-white snapshots in 1024 x 1024 pixel resolution.

These new images were taken by Monitoring Camera 3 on the Mercury Transfer Module (MTM) – one of three components that will separate into independent spacecraft upon arrival at Mercury.

An ESA animation of all 64 of the images together shows Venus clearly moving across the field of view close to the spacecraft body on the left.

Then, Venus gets progressively bigger in the field of view, as the spacecraft approaches.

One image was taken approximately every three minutes for the composite. 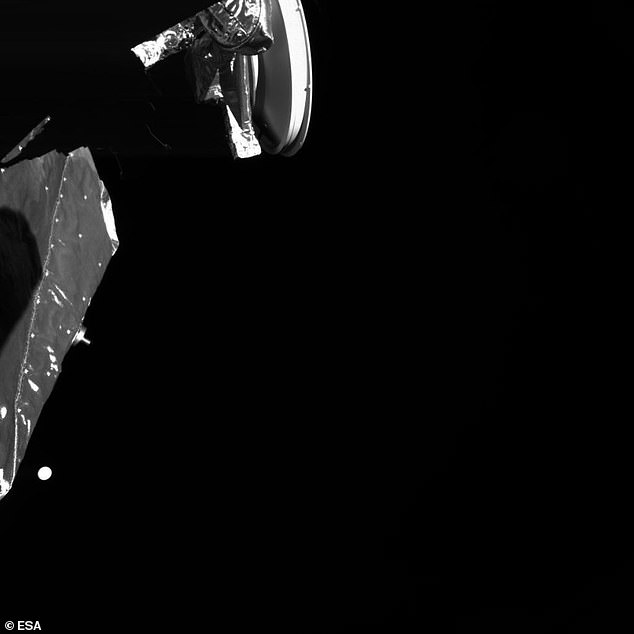 Venus appears as a small, peaceful white orb in the dark confines of space, surrounded by the BepiColombo spacecraft 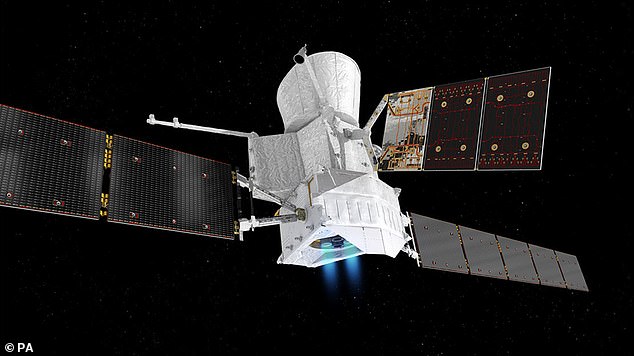 – Study Mercury as a planet: its form, interior structure, geology, composition and craters

– Investigate polar deposits – including their composition and origin

– Perform a test of Einstein’s theory of general relativity

‘Following the successful Earth flyby where our instruments worked even better than expected, we are looking forward to see what will come out of the Venus flyby,’ said Johannes Benkhoff, ESA’s BepiColombo project scientist.

‘We hope to be able to provide some atmosphere temperature and density profiles, information about the chemical composition and cloud cover, and on the magnetic environment interaction between the Sun and Venus.’

BepiColombo approached Venus for what is known as a gravity assist or ‘slingshot’ manoeuvre.

By approaching a planet, satellites can making use of its gravitational pull to add momentum, increase its velocity and propel it onward.

BepiColombo needs these gravitational slingshots to set it on course for Mercury orbit.

Together with the spacecraft’s solar electric propulsion system, they will help steer BepiColombo against the strong gravitational pull of the Sun.

Wednesday’s flyby is the second gravity assist of Venus that the spacecraft needs for its seven-year trip to Mercury.

The next flyby, planned for August 10, 2021, will see the spacecraft pass within just 340 miles (550km) of Venus’ surface – around the same distance as between London and Edinburgh – which will make for a much bigger and more detailed shot of our rocky neighbour. 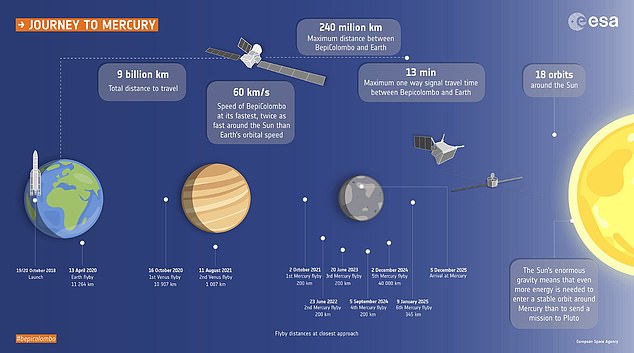 Journey of BepiColombo, which will make a second fly-by in August 2021 before it continues its route to Mercury 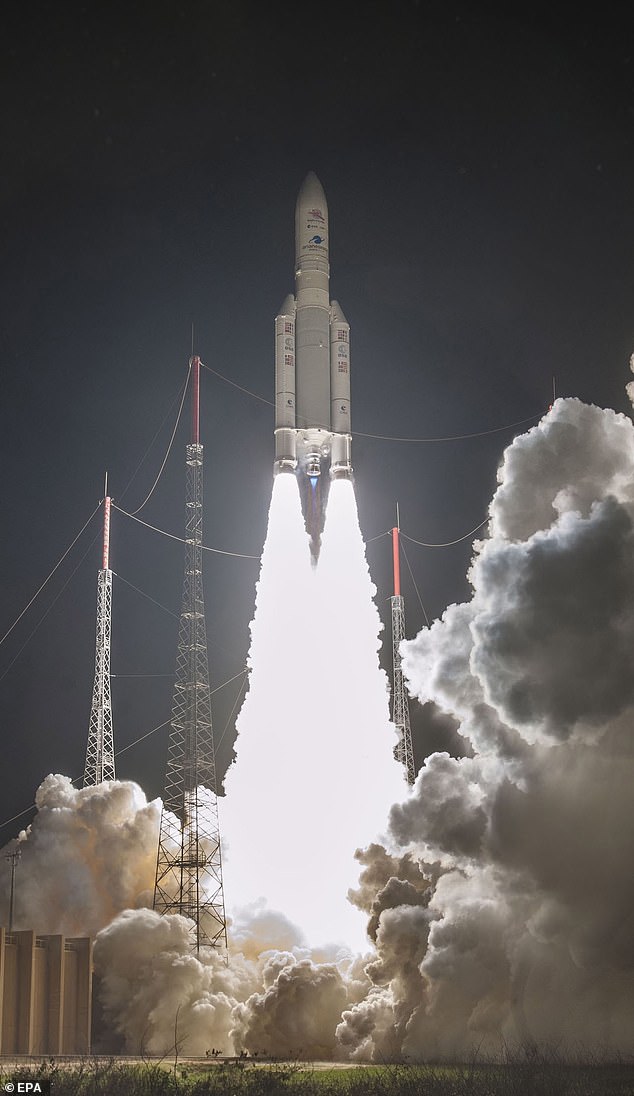 BepiColombo will later make six flybys of Mercury itself to slow down before its arrival at its poles in 2025.

The ESA has described the $1.5 billion mission as one of its most challenging yet due to Mercury’s extreme temperatures, the intense gravity pull of the Sun and blistering solar radiation.

After arrival at Mercury, the spacecraft will separate and its two orbiters – the ESA’s Mercury Planetary Orbiter (MPO) and JAXA’s Mercury Magnetospheric Orbiter (MIO).

Both will manoeuvre to their dedicated polar orbits around the planet – MPO will swoop into Mercury’s inner orbit while MIO will gather data from a greater distance. 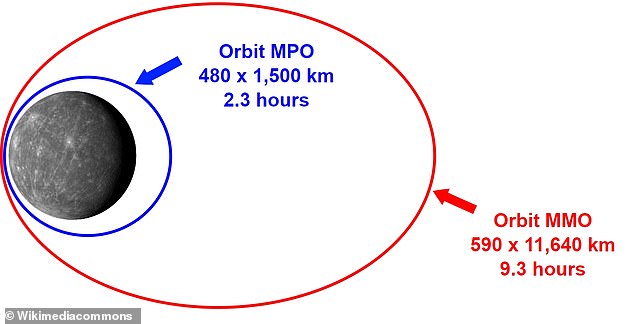 After arrival at Mercury in late 2025, the spacecraft will separate and its two orbiters – the ESA’s Mercury Planetary Orbiter (MPO) and the Japan Aerospace Exploration Agency’s Mercury Magnetospheric Orbiter (MIO), both with different orbit times 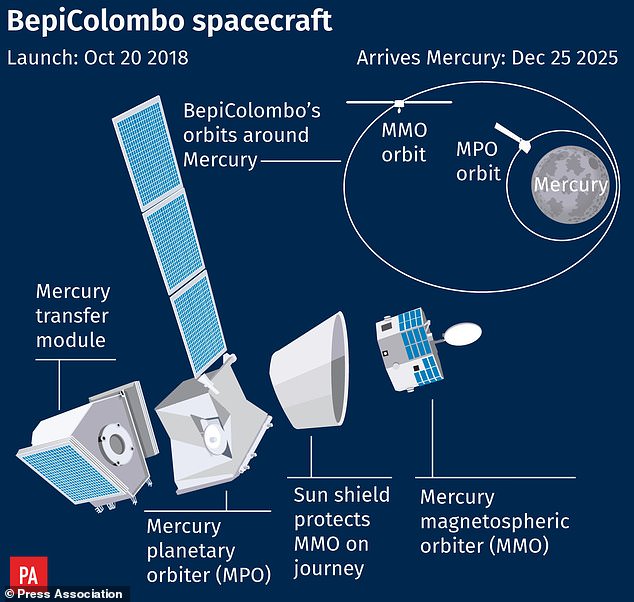 Protective measures on BepiColombo (pictured)  include a heat shield, novel ceramic and titanium insulation, ammonia-filled ‘heat pipes’, and in the case of the Japanese orbiter, ‘roast-on-a-spit’ spinning

BepiColombo launched from French Guiana aboard an Ariane 5 rocket on October 20, 2018, and made a flyby of Earth on April 10 this year, delivering some poignant pictures of our planet in the midst of coronavirus lockdown.

Images and video of the moment the craft flew 7,800 miles (12,700km) above the South Atlantic Ocean were beamed to headquarters on Earth.

Researchers hope the mission will help them understand more about Mercury, which is only slightly larger than Earth’s Moon (3,031 miles in diameter versus 2,158 miles) and has a massive iron core.

The last spacecraft to visit Mercury was NASA’s Messenger probe, which ended its mission in 2015 after a four-year orbit. 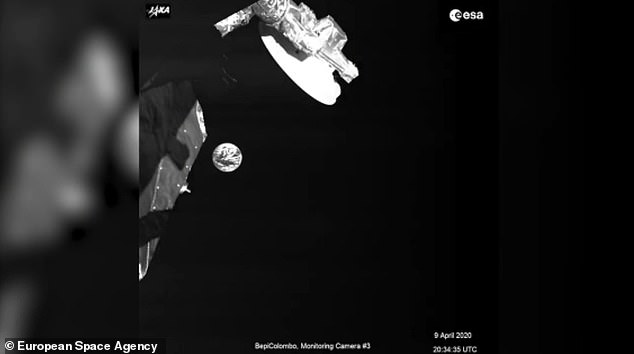 BepiColombo captured footage of Earth during a flyby in April. Images and video of the moment the craft flew above the South Atlantic Ocean were beamed to headquarters on Earth

HOW WILL BEPICOLOMBO GET TO MERCURY?

The carrier will use a combination of electric propulsion and multiple gravity-assists at Earth, Venus and Mercury to complete the 7.2 year journey to the Solar System’s mysterious innermost planet

Once at Mercury, the orbiters will separate and move into their own orbits to make complementary measurements of Mercury’s interior, surface, exosphere and magnetosphere.

The information will tell us more about the origin and evolution of a planet close to its parent star, providing a better understanding of the overall evolution of our own Solar System.

Scientists will first seek to launch what they termed ‘a technological masterpiece’ on October 5, 2018 from Kourou in French Guiana on the back of an Ariane rocket, with an eight-week launch window if there are any difficulties.

‘Arrival at Mercury is first foreseen … on December 5, 2025,’ added Reininghaus.’

BepiColombo features three components that will separate upon arrival: