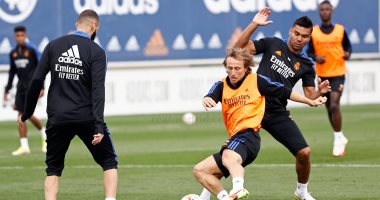 Frenchman Ferland Mendy continues his attempts to overcome his physical problems, which he has been suffering from since the fifth of last May.

On the fifth of last May, when the Royal fell in the semi-finals of the last edition of the Champions League at the hands of Chelsea, who crowned the championship, Mendy suffered a shin injury that later caused him muscle problems that prevented him from returning to play yet, and the goal is now to return to the stadiums after The international break scheduled to begin next Monday.

And participated Mendy training Brazilian Marcelo. The left-back was also able to play for only two minutes since the start of the season, during Real’s 5-2 victory over Celta Vigo, and despite the lack of an official medical statement, the player suffered his second injury of the season.

As for the Spaniard Dani Carvajal, who suffers from severe problems without an official medical report as well, and Dani Ceballos, who has been injured in the ankle of the left leg since his first participation with the Spain national team in the Olympic Games on July 22, they trained inside the club’s sports city facilities.

With regard to the Welsh player Gareth Bale, who is also injured, the Royal Club did not mention any details about his condition on its website.

The coaching staff, led by Italian Carlo Ancelotti, supervised the training of Real, who will return to training on Saturday, before the team is a guest on Sunday against Espanyol in the second round of the Spanish First Division.

Thomas Bryant says his injury has changed his life

Know your gemstone suitable for the autumn period.. aquamarine or sapphire?