Ethnic minorities are twice as likely to die from Covid-19 than white people because they live in deprived areas and work in public-facing jobs, more data has suggested.

Numerous studies, including government-funded research, have shown black, Asian and ethnic minority (BAME) people are being hit hardest by the disease.

Some early scientific papers suggested that the increased risk among minorities may have been fuelled by higher rates of underlying health conditions or genetic differences.

But an increasing body of evidence has pointed to other factors – such as job types and geography – as the real driver behind the discrepancy between races. The latest report, by the Office for National Statistics, adds more weight to that theory.

It found the mortality risk for black and South East Asian men was two-and-a-half times greater than white men, even when comorbidities and age had been factored in. Among women the risk was double.

Experts behind the report said the findings show the risk was most likely explained by other factors mostly linked back to poverty.

Living in overcrowded households, working front-facing jobs and relying on public transport raise the risk of getting infected in the first place.

The most deprived areas in the country are also home to high proportions of people from BAME backgrounds.

A mountain of studies have shown the poorest Brits are twice as likely to die from the disease as the wealthiest people in the country. 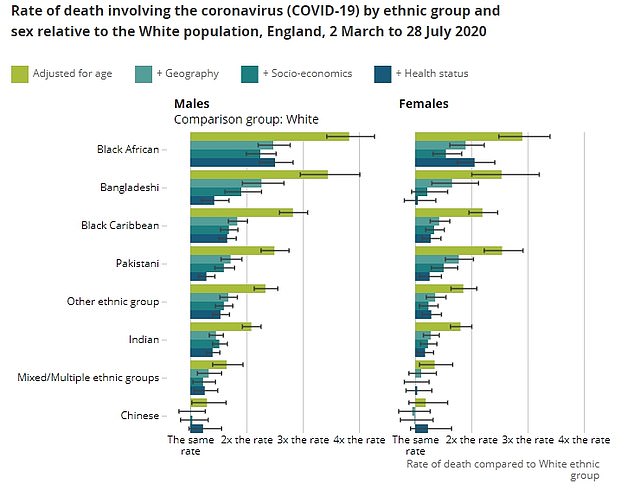 Ethnic minorities are twice as likely to die from coronavirus than whites. Black people have been the worst-affected by the disease, following Brits from South East Asian backgrounds 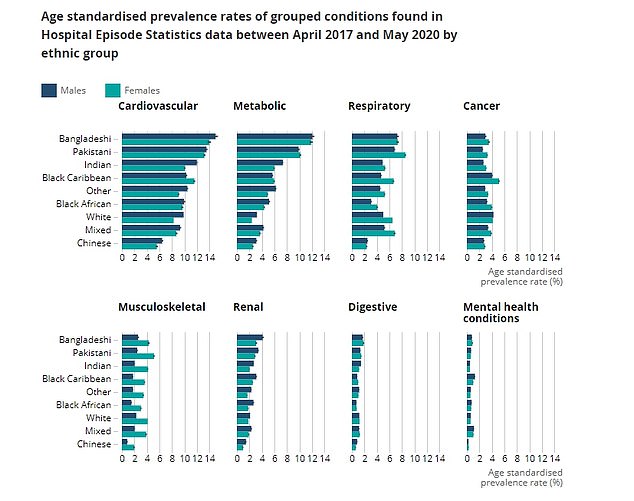 Minorities were more likely to suffer from comorbidities, but the risk from Covid-19 remained true even when these had been factored in – suggesting job types and geography were the driving factors 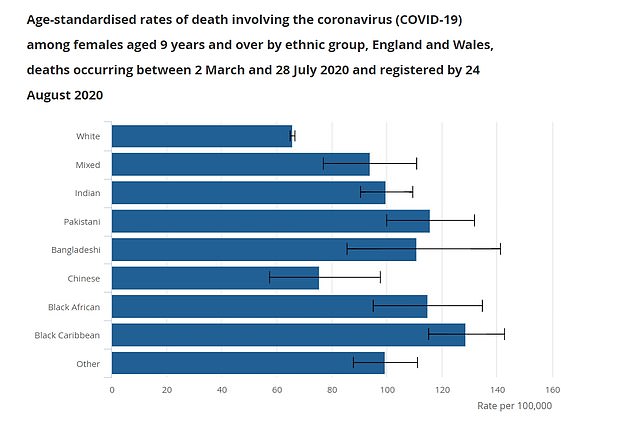 Covid-19 death rate among men: The mortality risk was greatest among men with black African heritage, who were killed at a rate of 287.7 per 100,000 people. Among Bangladeshi and black Caribbean men, the rate was only slightly smaller, at 270 per 100,000 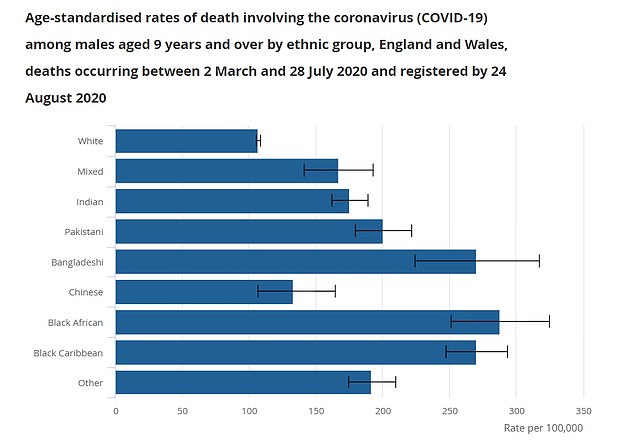 Ben Humberstone, deputy director of the health and life events division at the ONS, said: ‘Using more detailed ethnic group categories and adding measures of pre-existing health conditions from hospital data we have been able to build on previous analyses of ethnic disparities in Covid-19 mortality.

‘Today’s report confirms that when adjusting for age, rates of death involving Covid-19 remain greater for most ethnic minority groups, and most notably so for people of black African, black Caribbean, Bangladeshi and Pakistani ethnic background.

Asian men and women living in care homes are at a greater risk of death involving coronavirus than white residents, figures suggest.

The Covid-19 death rate for female care home residents from an Asian background was two times as high compared to white residents, the Office for National Statistics (ONS) said.

The death rate for male Asian residents was 1.6 times greater than the rate for white residents.

Black residents were 1.6 and 1.7 times more likely to die with Covid-19 than white men and women respectively.

The ONS estimated mortality rates involving Covid-19 of ethnic groups based on deaths between March 2 and July 28 which could be linked to the 2011 Census.

And analysts used NHS hospital episode statistics to see whether attending hospital in the past three years for a relevant health condition affects the risk of death with the virus.

When adjusting for care homes’ geography and population density, the risk was reduced for all ethnic groups when compared to the white population.

The increased risk for black males reduced to 1.3, and for black women to 1.4, while for Asian men and women it decreased to 1.4 and 1.7 respectively.

Further adjusting for underlying health status reduced the risk by a small amount for both ethnicities, with the resulting increased risk for black men no longer significant.

The ONS said: ‘Overall, the mortality rates among ethnic groups do not show the same extent of increased risk observed among ethnic minorities in the general population.

‘After controlling for geography and health, we observe only a small significant increased risk for Asian males and black and Asian females; the risk to Asian females after adjustment is 1.7 times the risk to white females.’

Looking at the wider population, the ONS found black African, black Caribbean and Bangladeshi men had ‘significantly higher’ rates of death involving Covid-19 than all other ethnic groups, with rates exceeding 250 deaths per 100,000 people,

Black Caribbean women had a death rate of almost two times that of white women, at 128.8 deaths per 100,000 population.

All ethnic minority groups other than Chinese had a higher rate than the white population across both genders.

The ONS said the increased risk for some ethnic groups cannot be fully explained by pre-existing health conditions and is most strongly linked to socio-economic factors.

Taking into account geography, socio-economic characteristics and health measures, including pre-existing conditions, black African males were 2.5 times as likely and women were 2.1 times as likely.

Ben Humberstone, deputy director of health analysis and life events at the ONS, said: ‘Today’s report confirms that when adjusting for age, rates of death involving Covid-19 remain greater for most ethnic minority groups, and most notably so for people of black African, black Caribbean, Bangladeshi and Pakistani ethnic background.

‘Our statistical modelling shows that a large proportion of the difference in the risk of Covid-19 mortality between ethnic groups can be explained by demographic, geographical and socioeconomic factors, such as where you live or the occupation you’re in.

‘It also found that although specific pre-existing conditions place people at greater risk of Covid-19 mortality generally, it does not explain the remaining ethnic background differences in mortality.’

‘Our statistical modelling shows that a large proportion of the difference in the risk of Covid-19 mortality between ethnic groups can be explained by demographic, geographical and socioeconomic factors, such as where you live or the occupation you’re in.

‘It also found that although specific pre-existing conditions place people at greater risk of Covid-19 mortality generally, it does not explain the remaining ethnic background differences in mortality.’

The mortality risk was greatest among men with black African heritage, who were killed at a rate of 287.7 per 100,000 people.

Among Bangladeshi and black Caribbean men, the rate was only slightly smaller, at 270 per 100,000.

Women have been dying from coronavirus at half the rate of men, which experts say is not uncommon and is caused by a host of intricate biological differences.

It comes after a Manchester University study earlier this month pointed to socio-economic factors as the cause of higher death rates among minorities.

The researchers analysed the data from both local and national sources to make the conclusion.

The new report for Mr Khan made the same two conclusions, and it pointed out that a disproportionate number of BAME people work in risky jobs in the NHS and care homes.

The ONS has previously found death rates for men in lower-paid, manual roles were three times higher than those in management, business and desk-based jobs.

Health chiefs launched a probe to investigate the disproportionate impact of Covid-19 on BAME Brits in April, prompted by a wave of evidence that showed white people were less likely to die from the disease.

Public Health England’s report, finally published in the summer, said historic racism and hostility towards immigrants could be partly to blame for the disparity.

It said ‘hostile environments’ towards immigrants may have affected settled BAME communities through ‘heightened prejudice’ and ‘societal tensions’ — but did not explain how this has directly raised the risk of Covid-19.

The report also claimed a lack of trust in the NHS may have left some BAME groups reluctant to seek help early on, potentially making their disease harder to treat. It said some people were ‘fearful of being deported’ if they presented to hospital.

And it claimed that BAME NHS staff may be less likely to speak up when they have concerns about personal protective equipment (PPE) or their risk.

The report – based on discussions with 4,000 people – noted that historic racism has meant non-white communities are generally poorer so have worse health, putting them at higher risk if they catch Covid-19.

Ethnic minority people — in particular those from black, Bangladeshi or Pakistani backgrounds — have for decades been more likely to have lower-paid jobs, leaving them with less money to live healthy lifestyles.

BAME people are more likely to have conditions such as heart disease and type 2 diabetes, PHE said, which make them more vulnerable to Covid-19.

And they are more likely to work in risky jobs in which they spend time in contact with members of the public, increasing the chance of them catching the disease.

Mr Hancock admitted that the report ‘exposed huge disparities in the health of our nation’ and his counterpart in the Labour Party, Shadow Health Secretary Jonathan Ashworth, noted: ‘Covid thrives on inequalities’.

Ministers this summer gave scientists £4.3million to investigate why black and Asian people are more likely to die from Covid-19.

UK Research and Innovation and the National Institute for Health Research funded six research projects to examine the link between coronavirus and ethnicity.