Dominic Cummings‘ bombshell No 10 exit has been celebrated in Brussels as Brexit talks reach their ‘make or break’ moment.

MEP Guy Verhofstadt led the fanfare by hitting out at ‘unelected bureaucrats, unrealistic ideologues’ on his Twitter page.

It comes as EU sources said trade talks between Britain and the Bloc are reaching the ‘make or break’ point with there still being ‘quite big gaps’ between the sides. 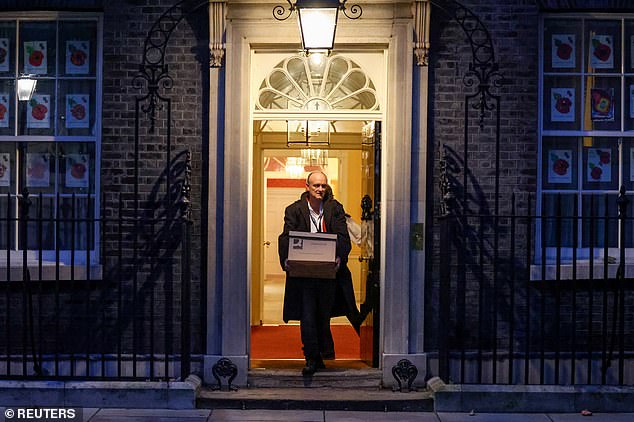 Dominic Cummings’ bombshell No 10 exit (pictured, last night) has been celebrated in Brussels as Brexit talks reach their ‘make or break’ moment 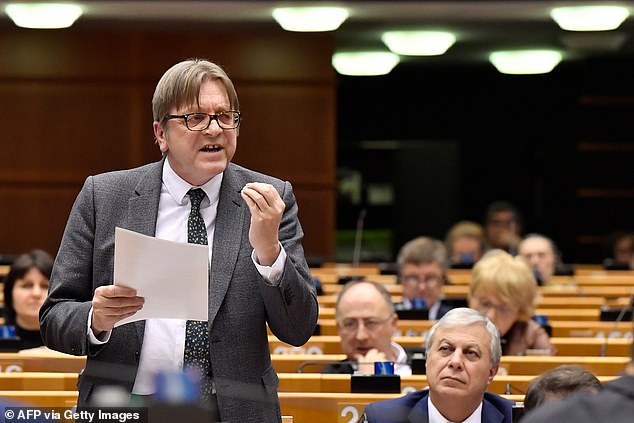 MEP Guy Verhofstadt (pictured speaking) led the fanfare by hitting out at ‘unelected bureaucrats, unrealistic ideologues’ on his Twitter page

He wrote: ‘Unelected bureaucrats. Unrealistic ideologues… There’s so much irony to the Cummings story.

Senior German MEP Manfred Weber, who is an ally of Angela Merkel, claimed yesterday’s announcement was a sign of the UK government losing direction. 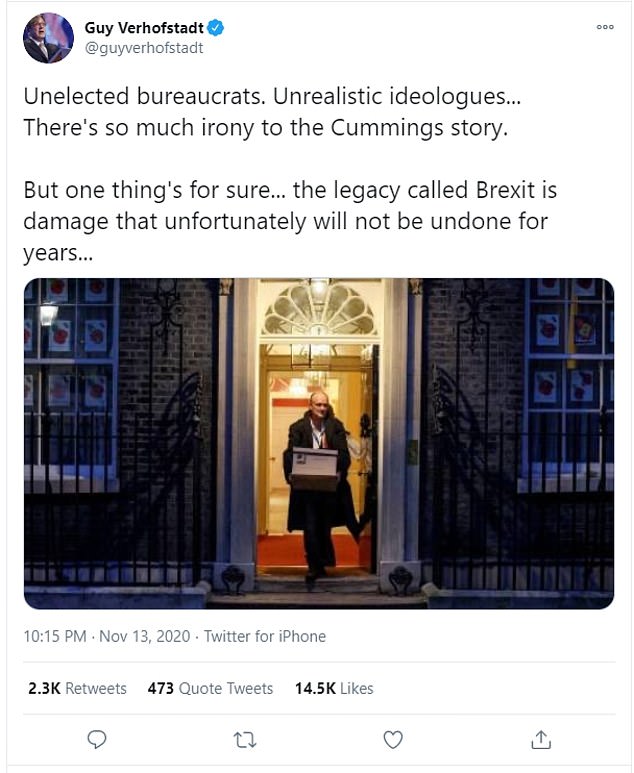 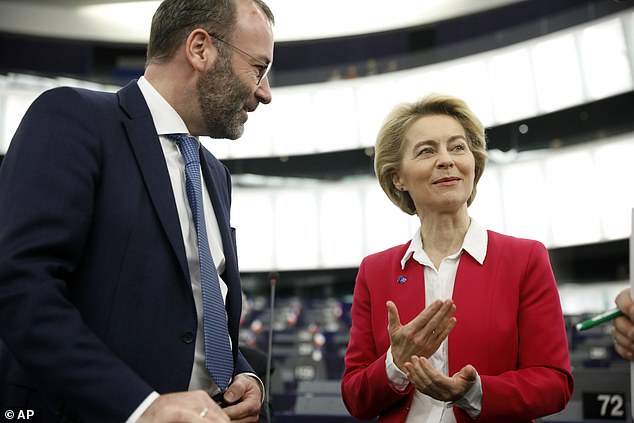 He told BBC Radio 4’s Today programme yesterday: ‘There are fair questions we are asking.

‘If you want to change in the future, with your background of sovereignty, your subsidies, regulations, then we must have an option an opportunity to react to stop to limit your access to our market.

‘I see what is happening now in Downing Street. We can also see this as a quite chaotic situation where we don’t have an idea what is really the line in Great Britain.

‘So don’t tell us we should be ready for compromise.

‘We need a clear idea from Boris Johnson now and I think it’s now time for leadership – having all the developments in America in mind where London understood it will be not so easy with Joe Biden to achieve an easy trade deal now.

Mr Cummings arrived home with bottles of alcohol last night after he was kicked out of Number 10 for good. 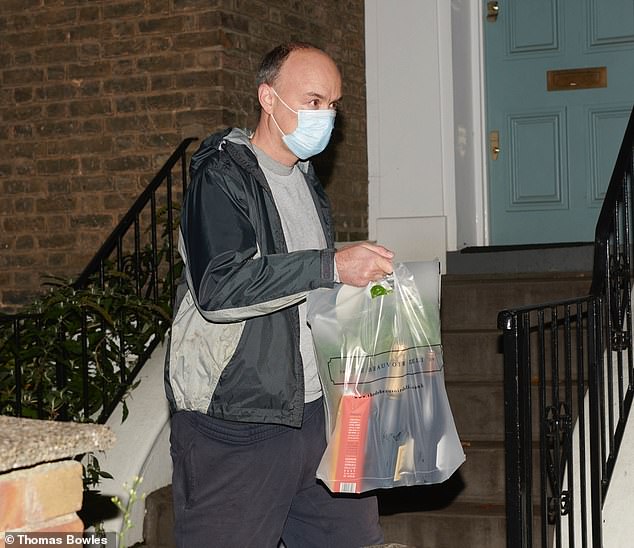 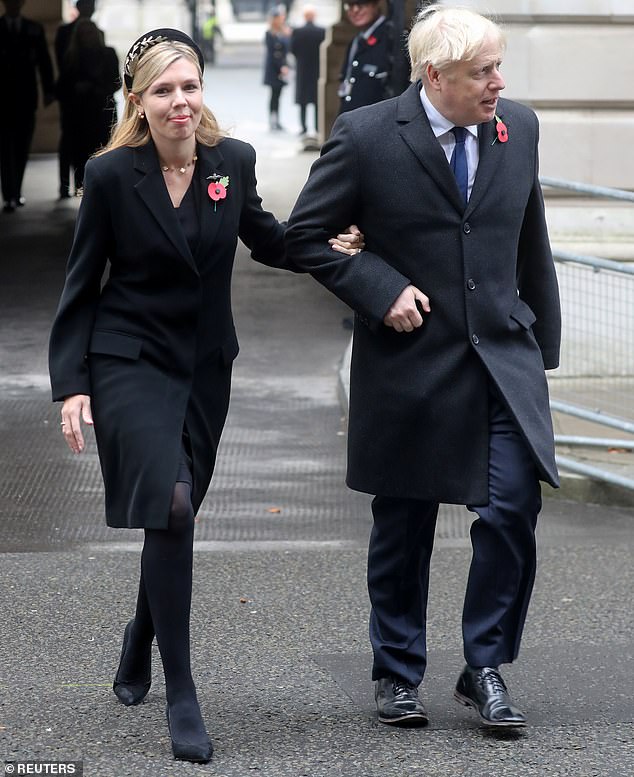 Boris Johnson had initially offered to promote communications Lee Cain to become chief of staff. But he dropped the plan following objections from his partner Carrie Symonds (pictured with Mr Johnson last week)

It followed a dramatic confrontation with Mr Johnson, who showed him texts allegedly proving he briefed against his fiancee, Carrie Symonds.

In a tense 45-minute meeting, the PM is said to have ordered his most senior adviser to leave having shown messages which had been forwarded to his partner.

The explosive claims were denied by No10.

Ms Symonds, reportedly referred to as ‘Princess Nut Nuts’ behind her back by Vote Leave loyalists, had thwarted his promotion to chief of staff.

Mr Johnson’s partner would ‘bombard’ the premier with as many as 25 text messages an hour expressing her thoughts on policy.

While Mr Cummings was set to leave at Christmas, it is understood it was Ms Symonds who convinced the PM to order him and Mr Cain to go immediately.

There are fears No 10 will now come under fire from the outside, with a senior Tory expressing concerns Mr Cummings could attempt to ‘settle scores’ on his way out.

It is understood the Brexit supremo and Mr Cain will be on gardening leave until mid-December.

Mr Cummings may continue to work from home to tie up loose ends, but neither man is expected back at No 10. 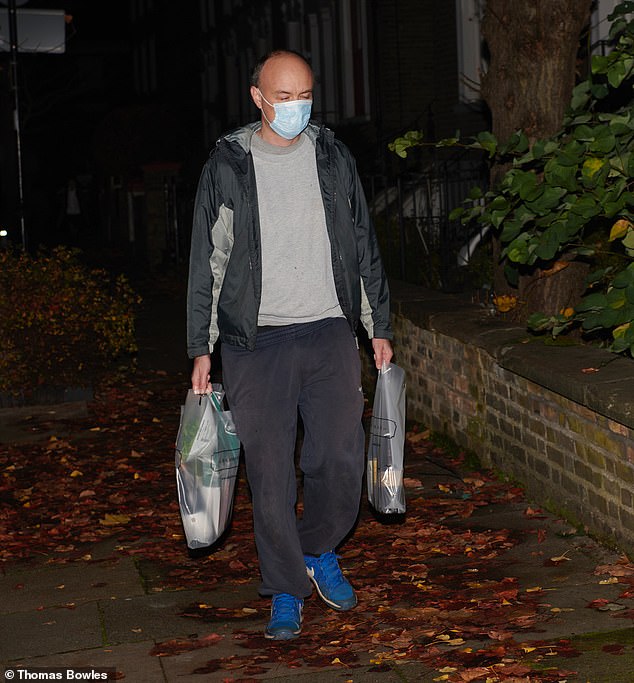 Mr Cummings outside his west London home last night , where he was pictured in tracksuits and trainers 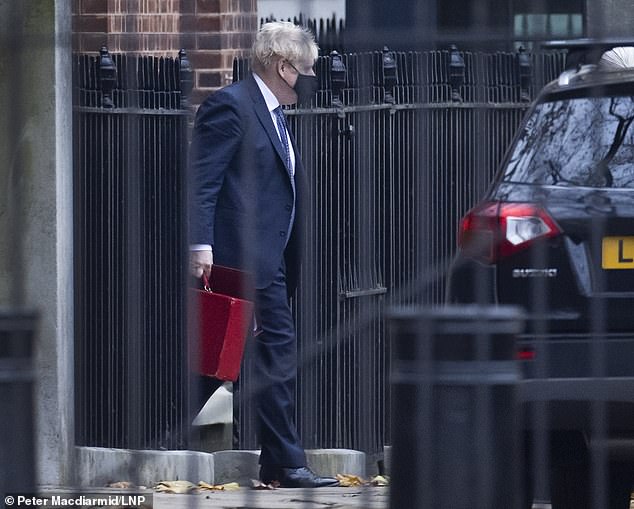 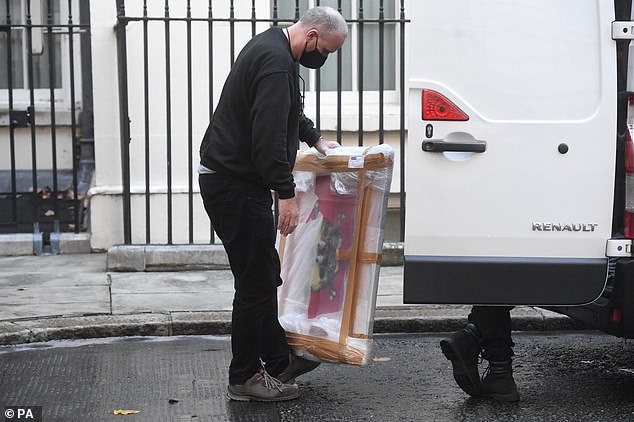 Mr Farage has insisted the exit of Mr Johnson’s top aide from Downing Street means a ‘Brexit sell-out’ is looming.

He said he had never liked the PM’s outgoing chief adviser, but admitted he was concerned about the consequences of his departure.

Mr Farage tweeted: ‘It is well documented that I have never liked Dominic Cummings but he has backed Brexit.

‘Seeing him leave Number 10 carrying a cardboard box tells me a Brexit sell-out is close.’

The comments came after Downing Street insisted that Mr Cummings’s departure would not affect Brexit talks.

Mr Cummings’s dramatic exit from Number 10 comes at a crucial juncture in the post-Brexit talks between the UK and Brussels. 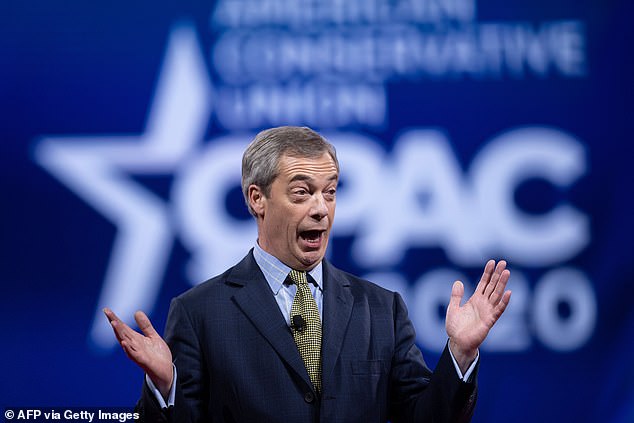 The Prime Minister’s official spokesman James Slack insisted suggestions the Government could compromise on key principles in the wake of Mr Cummings’s decision to leave were ‘simply false’.

Mr Cummings was widely seen as the mastermind behind the victorious Vote Leave campaign in the 2016 referendum.

Talks on a free trade agreement between the UK and EU have been continuing this week in London and are due to ‘pause’ over the weekend before resuming next week in Brussels.

London and the EU are trying to hammer out a post-Brexit trade deal after the current transition period finishes on December 31.

EU sources have said there has not been much headway in recent days on sticking points they had hoped to resolve.

Meanwhile UK insiders told the BBC there were still ‘quite big gaps’ that needed to be filled.

Neither side feels a draft deal can be struck in the coming days as they race to settle the future before the UK leaves the single market and customs union on January 1.