The EU rollout of the Pfizer/BioNTech vaccine has not been linked to any deaths and has had no unexpected side-effects in its first month, the European Medicines Agency said today.

The good review of the Pfizer jab comes as the EU battles with rival vaccine provider AstraZeneca about delayed supplies to the bloc – while Germany added to the pressure on the EMA today by saying it expected the agency to limit the Oxford/AstraZeneca vaccine to under-65s.

The EMA said it had looked at reports of deaths of elderly patients in Norway and other countries after receiving the Pfizer jab, and concluded that ‘the data did not show a link to vaccination’.

It added that sporadic reports of allergic reactions did not go beyond what was already known about occasional side-effects of the vaccine. 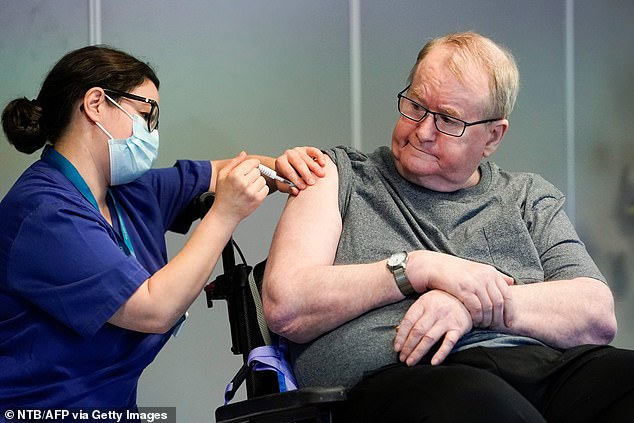 A care home resident receives the Pfizer vaccine in Norway, where a handful of deaths among elderly jab recipients led the EMA to investigate – but both the EU regulator and Norwegian authorities have found no cause for concern

EU vaccinations began in late December but are still lagging behind those in Britain, with several governments facing criticism over the sluggish pace of vaccination.

The Pfizer jab which was the first to be approved in Europe has been delivered to all 27 EU nations, but the bloc has only given out 2.4 vaccine doses per 100 people compared to 11.7 in the UK.

In its first safety review of the Pfizer product, the Amsterdam-based EMA said the data so far ‘is consistent with the known safety profile of the vaccine, and no new side effects were identified.’

‘The benefits of [the jab] in preventing Covid-19 continue to outweigh any risks, and there are no recommended changes regarding the use of the vaccine,’ it said.

Norway in particular had attracted attention for registering 33 deaths among 20,000 care home residents who had received the first dose of the vaccine.

Norwegian health authorities said it was unsurprising that some of the frail and elderly patients who were first in line for the vaccines would have died naturally by chance, given that 400 people typically die in care homes every week.

But the EMA said it had investigated ‘given concerns which arose from Norway’, after other deaths were reported in France, Denmark, Finland and Sweden.

‘In many cases concerning individuals above 65 years of age, progression of pre-existing diseases seemed to be a plausible explanation for death,’ the EMA said.

Some had already received palliative care, it said.

The watchdog said it had asked the company to keep ‘reviewing all reports of suspected side effects with fatal outcome thoroughly.’

But it also noted that clinical trials of the Pfizer vaccine had included people aged 75 and older.

By contrast, regulators in Germany have raised concerns about the small number of older people who took part in the AstraZeneca trial.

A German vaccine commission said on Thursday that the data was insufficient to recommend using the vaccine for over-65s.

But Britain has approved the jab for all age groups, with AstraZeneca pointing to results published in a medical journal showing that 100 per cent of older people produced antibodies after getting two doses of the vaccine. 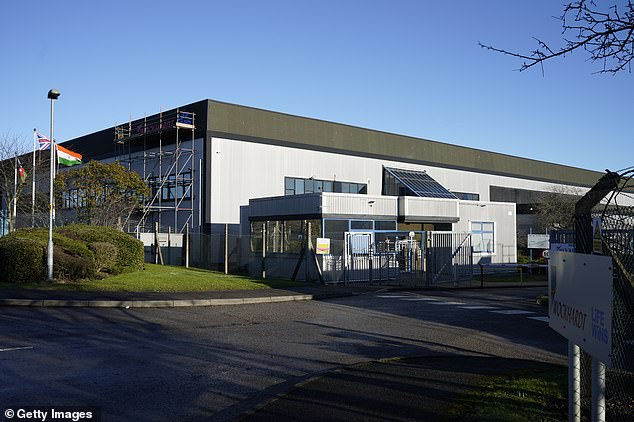 Germany’s decision not to recommend the Oxford/AstraZeneca vaccine for over-65s comes amid a row between EU, Britain and the manufacturers over limited vaccine suppplies (pictured, an AstraZeneca factory in Wrexham)

Boris Johnson yesterday defended the jab, saying that UK regulators believe it is ‘effective across all age groups’.

Asked about Germany’s decision not to recommend the vaccine for over-65s, he said: ‘I don’t agree with that.’

Dr June Raine, the head of UK regulator MHRA, said that ‘current evidence does not suggest any lack of protection against Covid-19 in people aged 65 or over’.

The questions over the effectiveness of the AstraZeneca jab come amid a separate row over supplies of the UK-made vaccine to the EU.

Brussels said today it would publish a redacted copy of the contract with AstraZeneca which is at the heart of the dispute after the British-Swedish firm said it could not meet all its orders to the EU.

The firm’s CEO, Pascal Soriot, has said there have been production glitches in AstraZeneca’s plants operated by subcontractors in the EU, and that the contract only called for it to make ‘best efforts’ to hit targets.

‘The ‘best effort’ applies as long as it was not clear whether they could develop a vaccine. We have passed that time. The vaccine is there,’ she said.

AstraZeneca has continued to fulfil its separate contract with Britain, where the PM says he expects two million doses to keep being supplied every week.

One of the plants producing the vaccine in Europe, operated by the US company Thermo Fisher in Seneffe, western Belgium, was inspected this week by Belgian health officials at the European Commission’s request.