Euro 2020: England put a smile on our faces against Croatia – Alan Shearer

Let’s not get carried away – Sunday’s win over Croatia was only the start for England in this tournament. But it has put a smile on everyone’s faces, including mine.

After such a difficult few months, everyone wanted England to provide us with a feelgood factor in their opening game of Euro 2020, and they did exactly that.

Their performance and the result helped of course, but it was the whole occasion that was enjoyable. It was just brilliant to have the fans back at Wembley, and there was such an amazing atmosphere from the moment I walked into the stadium before kick-off.

It was a reminder that England playing at Wembley in a major tournament feels different. It’s a special occasion, and it’s great to have us playing here.

It felt like everyone was buzzing on Sunday, including the players. I know there wasn’t a full house, but the boys still appreciated having the supporters there for them, and they sent them home happy.

We want to see more of the same

I spoke before the Croatia game about how I was hoping Euro 2020 could lift the whole country and have the same impact that Euro 96 did 25 years ago.

That was such an incredible time to be a fan and a player. It was a special month in this country and it was great to be a part of it.

It’s a different cast now, and a different plot – but football can still be a really positive power for good.

I remember talking a lot during the last World Cup about how Gareth Southgate and his players had a great connection with the fans, and we saw it again at Wembley.

There were only around 22,000 fans inside the stadium, but the roar that went up when the team came out to warm up before the game was amazing. That support makes a huge difference.

We will stay at Wembley for the last 16 if we win Group D and that is a massive incentive for the team. They responded to the fans, and we all want to see more of the same.

This was the first time England had won their opening game at a European Championship, at the 10th attempt. That statistic in itself is something to be proud of, because it shows how the start of any tournament is never easy.

You’re always under pressure, but this time we were at Wembley, playing the World Cup finalists on a red-hot day in London. I was very impressed with how we got the job done.

We went after Croatia early on, pressing them and closing them down. It meant we made a really fast, positive start with loads of energy.

Bigger tests await us I’m sure, but we got the result we wanted from this game and we played well too. There was plenty to build on from that performance.

England didn’t create that many chances, but they played with a bit of freedom and defended very well. Croatia didn’t offer very much up front but, when they did threaten, they were snuffed out very well. 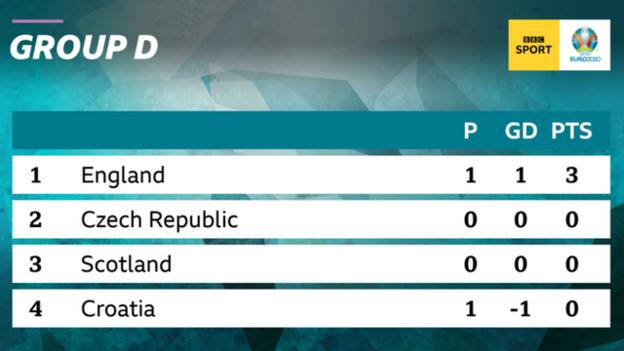 Southgate got every decision right

The way they played will give the England team lots of confidence and it sets us up very nicely for our next two games, which I think will be very different.

I don’t think Scotland or the Czech Republic will come out and attack – they will sit and defend deep.

Southgate might decide to change his team around to address that, but he has got the players to make any tweaks he wants. England have got more options right now than we have had for a long time.

You can see how strong we are from the outfield players who didn’t even make the bench today – Jadon Sancho and Ben Chilwell, as well as the injured Harry Maguire.

Sancho and Chilwell will be disappointed not to have featured against Croatia, as will the likes of Jack Grealish, who was a substitute but did not get on.

But I am absolutely certain they will play a part at some point in this tournament. Southgate is going to keep chopping and changing his team, depending on the opposition.

He had to make some big calls this time but he got every selection decision right, whether it was playing Kieran Trippier at left-back, picking Tyrone Mings at the back and Kalvin Phillips in midfield, or sticking with Raheem Sterling up front.

All of his players did everything they had to do. It was great to see.

Now we are and up and running at these Euros and I’m looking forward to seeing what this England team does next.