IAN HERBERT: Wales go into the game against Italy as underdogs but Manchester United winger Dan James can hurt Roberto Mancini’s ageing defence with his pace

By Ian Herbert For The Mail On Sunday

For Daniel James, the full significance of walking out in a Wales jersey against Italy on Sunday night extends far beyond football. His father died suddenly just over a year ago, so there will be a sense of how much having him in Rome’s Stadio Olimpico would have meant.

The 23-year-old related during the team’s stay in Baku how his father, Kevan, played a part in seeing him into the national set-up. ‘It was always Wales,’ he said, when asked if playing for England had ever been a possibility. ‘I went to my first camp when I was 12 in north Wales. My dad took me to it so I’ve been through the whole system.’

The platform his father helped provide gives James a chance to demonstrate what he brings to a game tonight. 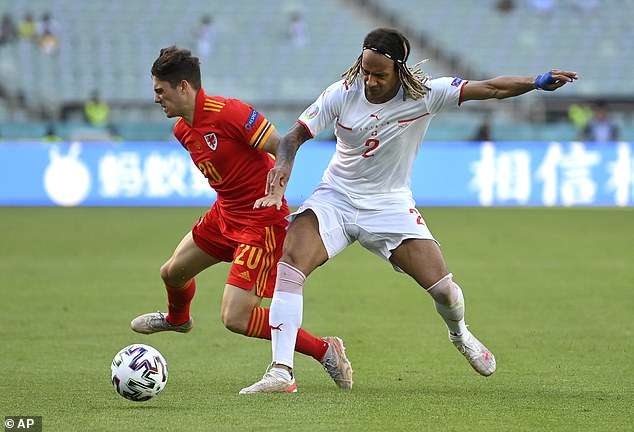 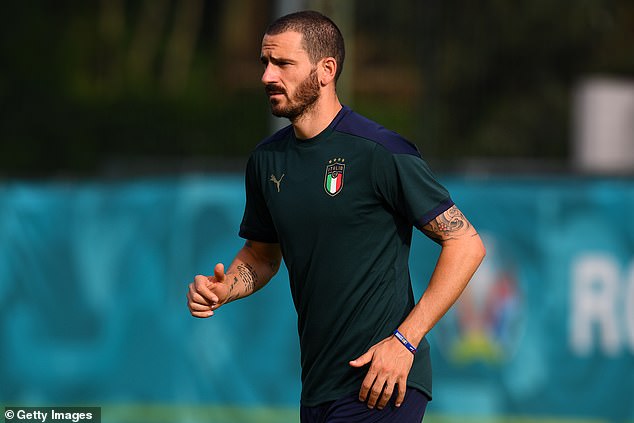 James could cause problems for Italy’s defenders, including Leonardo Bonucci, on Sunday

There was a feeling at times during his first Manchester United season that he did not bring quite enough end product to go with the electrifying pace, which has seen him clocked as the second fastest player at the tournament. Only Italy’s Leonardo Spinazzola has topped his recorded 33.5 km/h.

But the evidence of the two games has suggested otherwise. James has delivered from wide with both feet, with his weaker left providing the supply line for forward Kieffer Moore against Switzerland.

‘I see in him a bit of the way Leighton James ran with the ball, using his back foot at times to manipulate it,’ said former Welsh forward Dean Saunders, whose prime asset was pace. ‘He’s also improved off the ball. He’ll come short and spin — run without the ball.’ 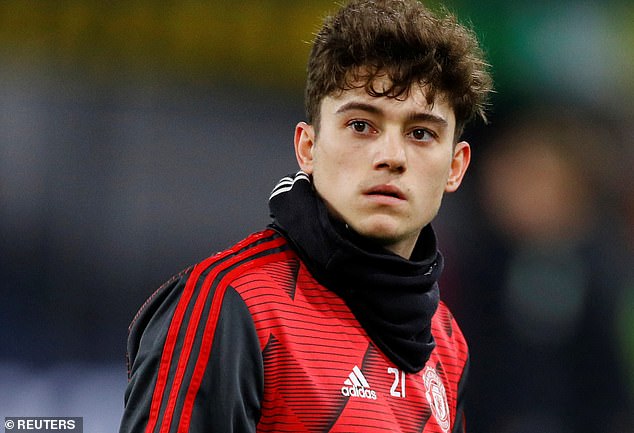 With Giorgio Chiellini, 36, and Leonardo Bonucci, 34, set to anchor Italy’s defence, James’s pace has the potential to be a useful weapon as Wales look for chinks in the armour of a side who have impressed so far.

He needs all the signature performances he can find for as long as Wales’s run lasts. If United recruit Jadon Sancho, the new signing would operate on United’s right, creating yet another obstacle to James’s progression. Mason Greenwood also blocks James’s path to the team on that flank, with Marcus Rashford and Anthony Martial in his way down the left.

He said he was trying to employ his pace more in the tournament heat. ‘There have been times I’ve not used it to my advantage as much as I can,’ he said. ‘But you just have to use it. In this kind of tournament, games are coming thick and fast and it’s very hot so you have to pick your moments.’

Wales manager Rob Page insisted that he did not want his side to ‘limp across the line’ in the group stage. Though he admitted Wales may have to ‘suffer quite a bit without the ball’, he said that the incentive of playing a last 16 game at Wembley in front of thousands of Wales fans – by winning the game and group – would form part of his team talk.

There was a little pre-match knock-about. Roberto Mancini had been asked if playing Wales compared to facing Stoke City as Manchester City manager, to which he said Stoke were always tough. Asked about the comparison, Bale said: ‘I didn’t know Stoke were that good.’

But Wales have no distractions. ‘We’ll go into the game motivated. There’s no defeatist mentality,’ Page said. Jose Mourinho is among those who see James as a vital asset tonight.

Even Jose Mourinho eyes James as a potential breakthrough: ‘This kid James, they have to rely a lot on him, because he is fast. He’s the one who can break defenders.’ 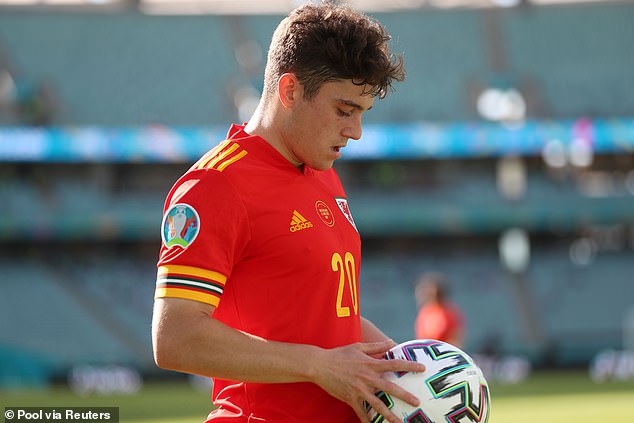 Only Italy’s Leonardo Spinazzola has topped his record of 33.5 km/h so far at the Euros