The excitement has been building all week.

And a host of celebrities ensured to embrace the football fever as they watched the England and Scotland match at Wembley Stadium in London on Friday night.

British pop star Mel C, 47, and Scottish presenter Lorraine Kelly, 61, soaked up the atmosphere – and enjoyed a little bit of friendly rivalry – during the game which was also attended by Mark Wright, 34, and Roman Kemp, 28. 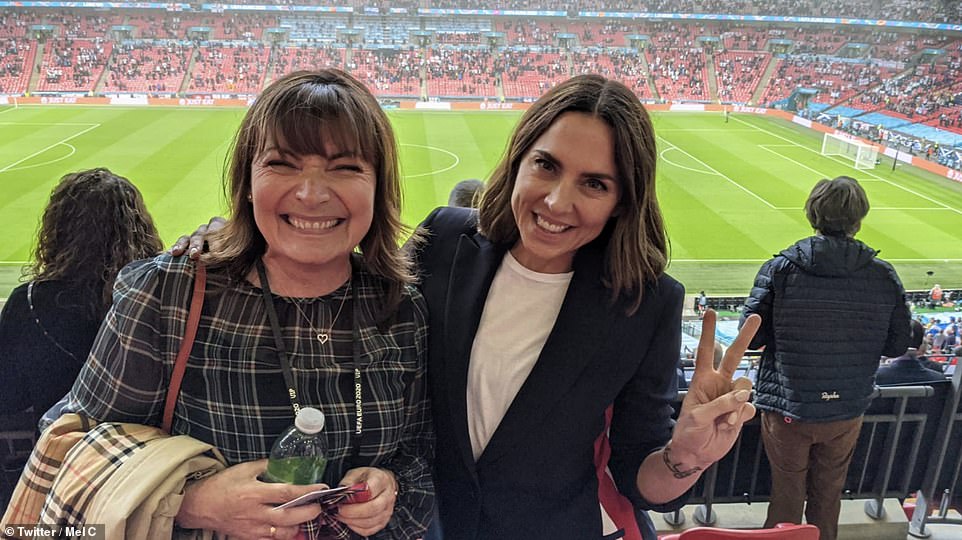 Mel and Lorraine appeared to be in great spirits as they posed for a snap with the pitch behind them during the evening, with the Scot putting on a very animated display and beaming a large grin.

The stars kept things casual for the all-important match, with the Spice Girl donning a white T-shirt and blazer and Lorraine opting for a checked shirt.

TOWIE’s Mark also shared a selfie to Twitter, with the football pro being joined by Roman Kemp and Nathan Evans for the game.

Roman really went all out with his attire, wearing a white England shirt over his light blue jumper and sharing his excitement by cheering in the picture. 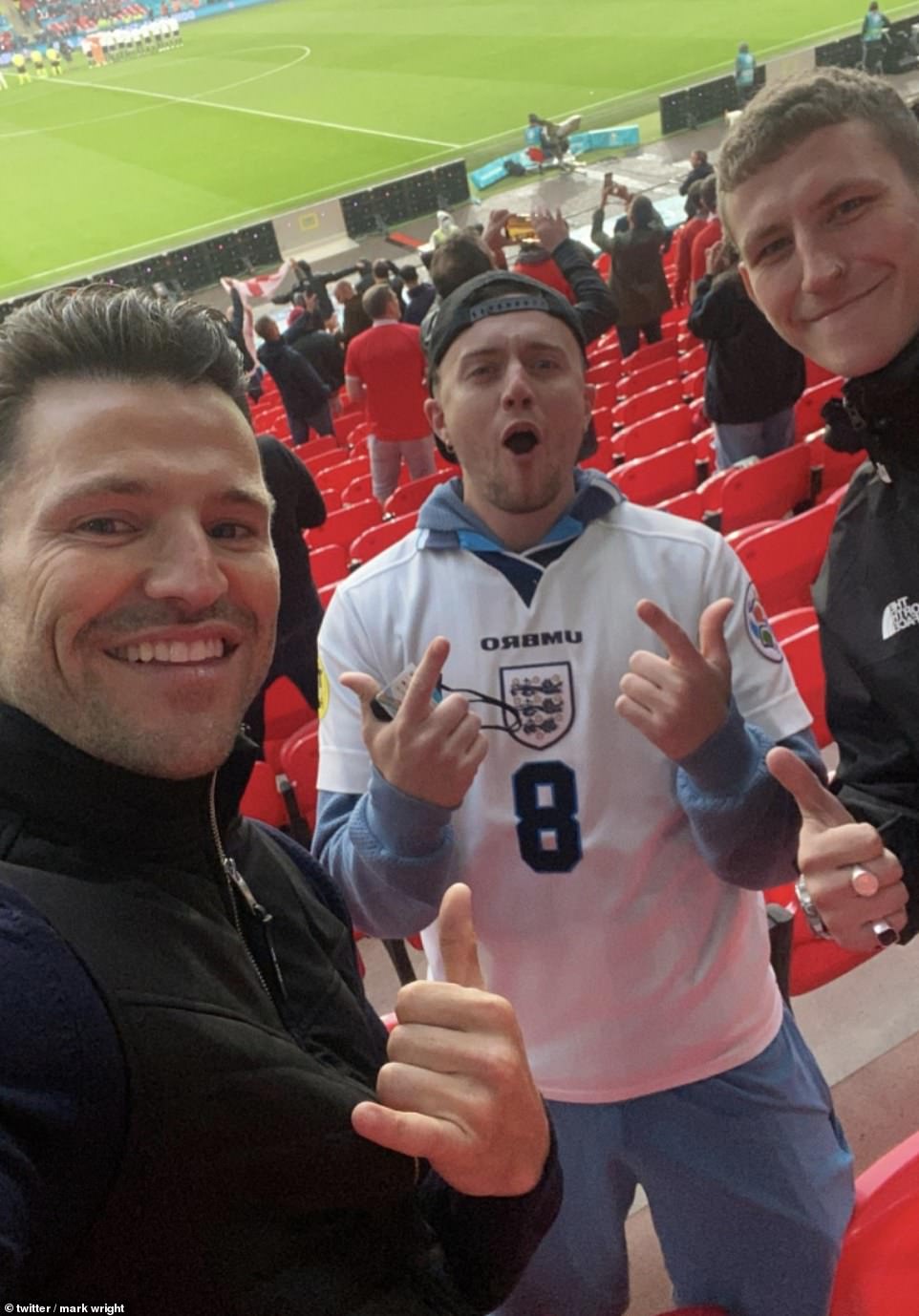 Supporting the boys! Mark Wright and Roman Kemp also took to the stands to cheer for England while their pal Nathan Evans was hoping for the Scottish side to be victorious

And celebrities who didn’t manage to scoop a ticket to Wembley also made sure to show their support and get behind the players as they tuned into the fixture at home.

Danielle Lloyd revealed she was watching the match while kicking back in her living room, rocking a pair of fluffy Louis Vuitton sliders while her little boy danced infront of the TV.

While Paul Knightley and his son Paul sported matching England kits ahead of kick off, with the proud dad optimistically declaring ‘It’s coming home’ in the caption to the sweet snap.

Victoria Beckham, whose former England player husband David was at Wembley for the game, also treated fans to another throwback from her days cheering him on in the stands. 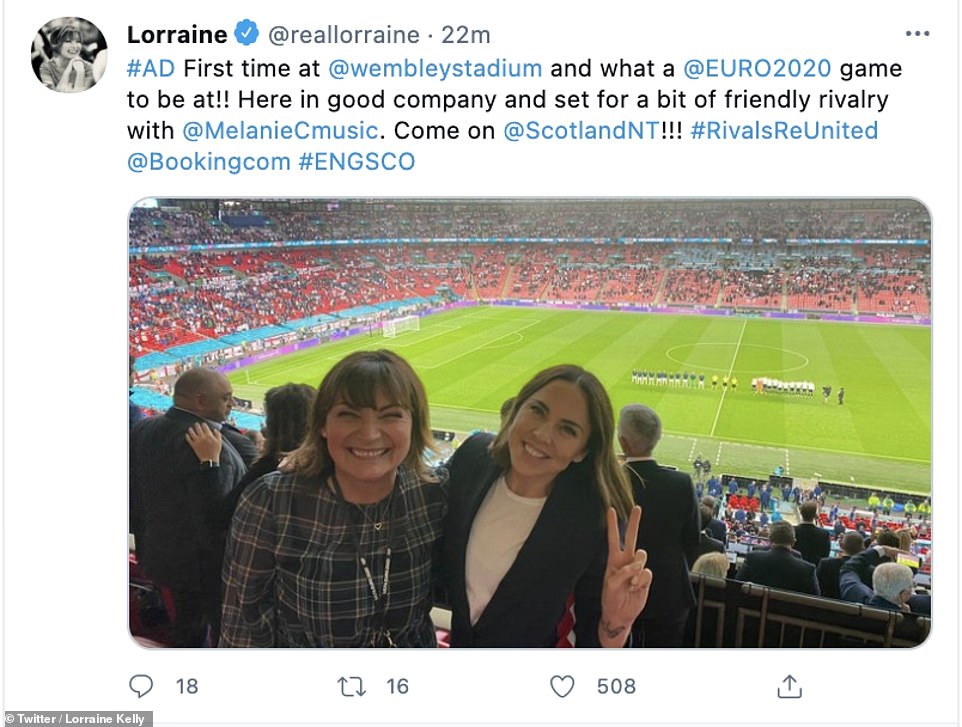 ‘Here in good company and set for a bit of friendly rivalry’: Lorraine beamed a grin in a snap shared to her Twitter account while enjoying an evening at the football with pal Mel C 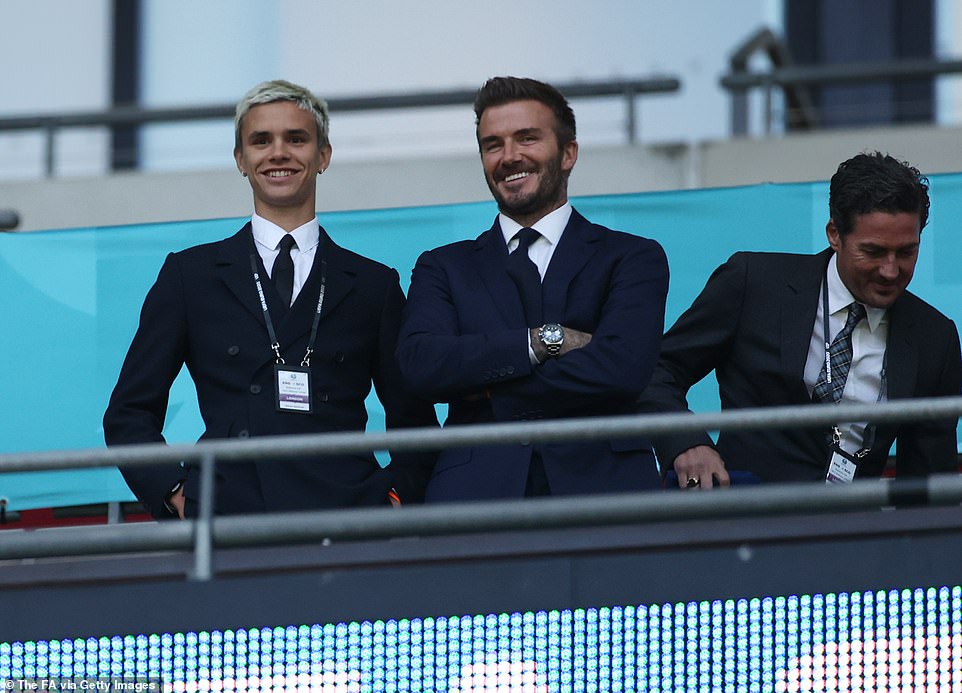 Game on! David Beckham also made an appearance at the ‘Battle of Britain’ England vs Scotland match with son Romeo, 18 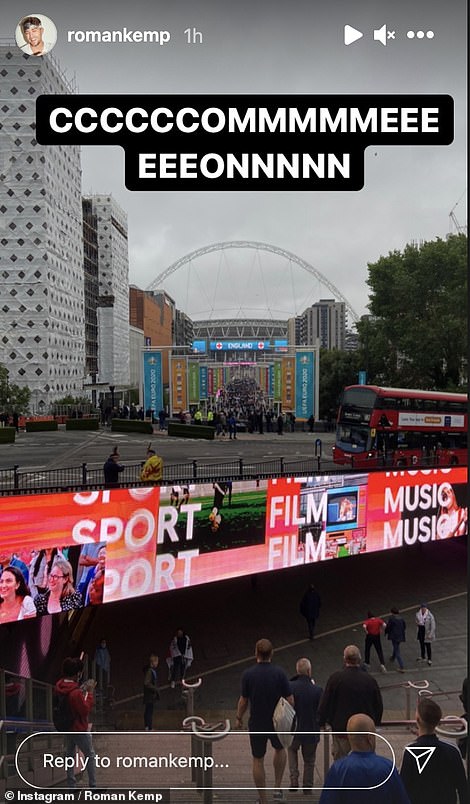 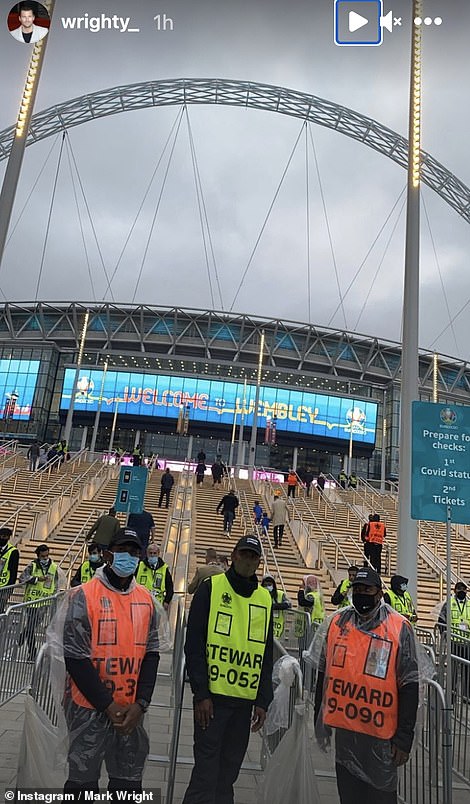 Getting ready: Mark and Roman also updated fans on Instagram Stories as they arrived at Wembley in the rain alongside lots of other excited fans hoping for an England win on the night 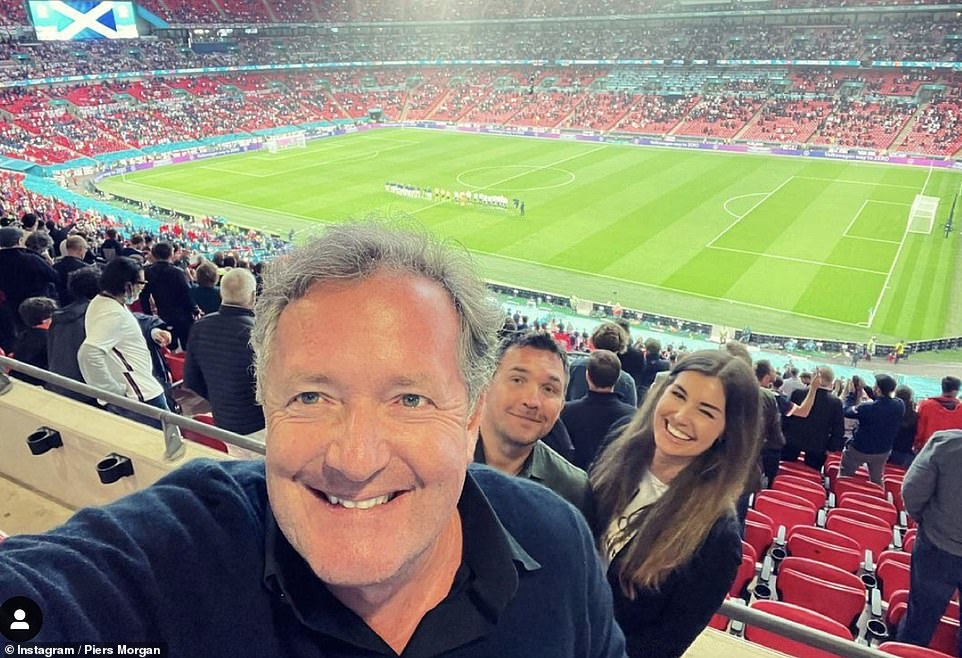 ‘Battle of Britain!’: Piers Morgan also enjoyed the match from Wembley, posting a selfie to his Instagram page 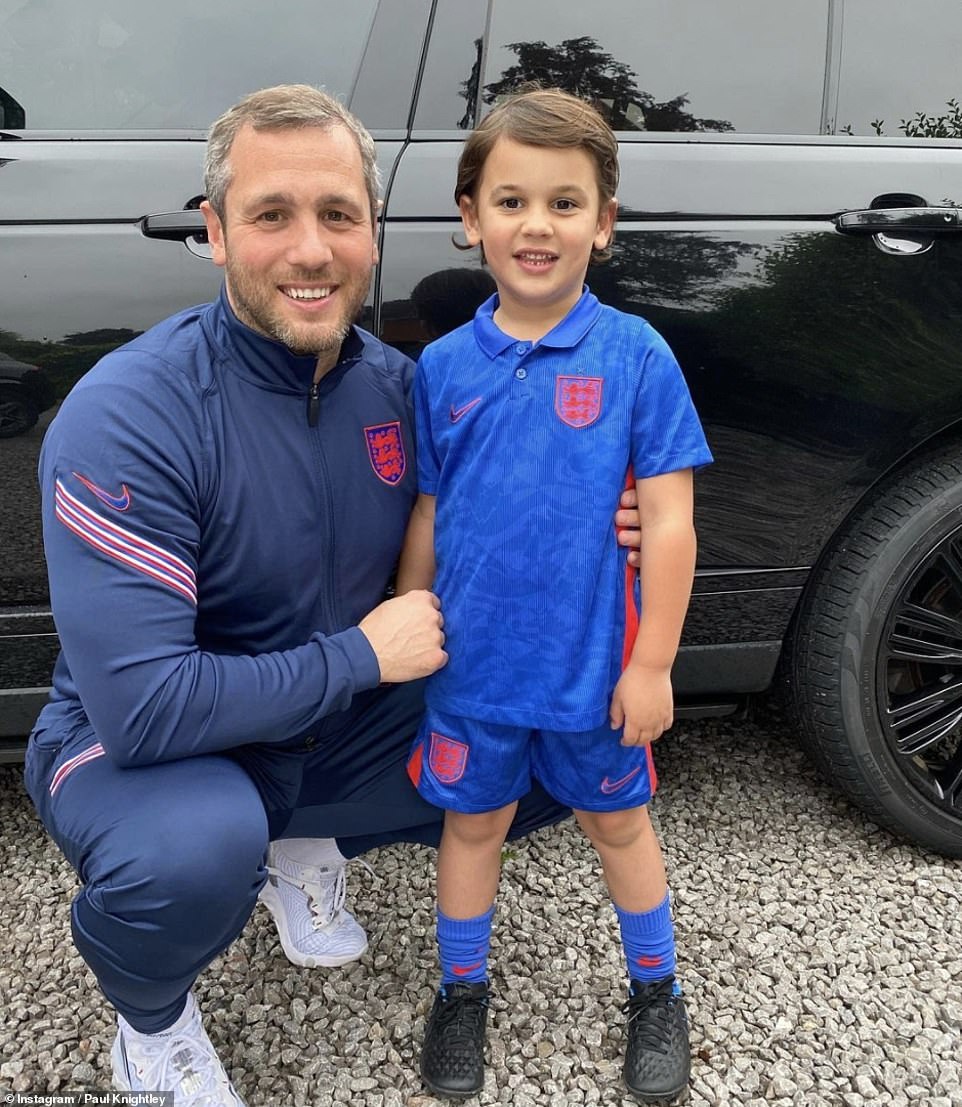 All kitted out: Paul Knightley, whose partner is The Mummy Diaries star Sam Faiers, and their little boy Paul donned matching England attire to watch the game from home, with the proud dad hoping that England would score their way to victory

The fashion designer looked incredible in an England tank top and white cap which she had styled with trendy sunglasses for the fixture, cheekily penning: ‘Oh wow! Another England game, another throwback!’

England were playing their second Euro 2020 match on Friday, this time taking on Scotland after winning against Croatia on Sunday.

The national side was led out by captain and star striker Harry Kane as they came face to face with the Auld Enemy in a rainy north London on Friday. 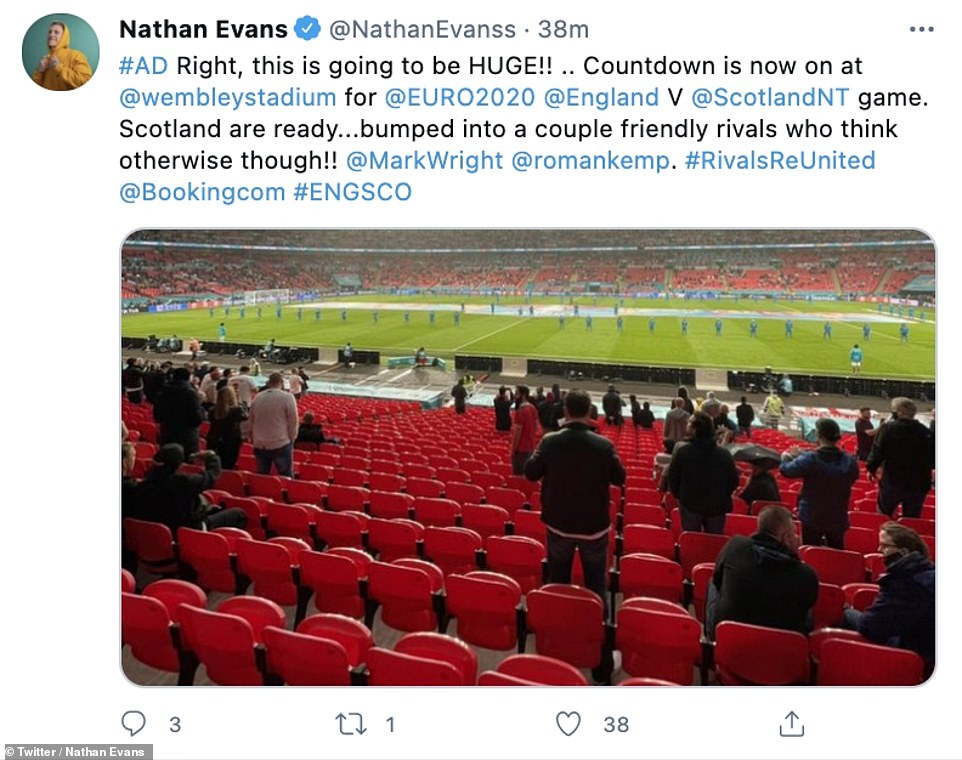 Big game: Nathan Evans revealed he’d be cheering for Scotland in a snap of the stands ahead of kick off, with the singer joining England fans Roman and Mark for the game 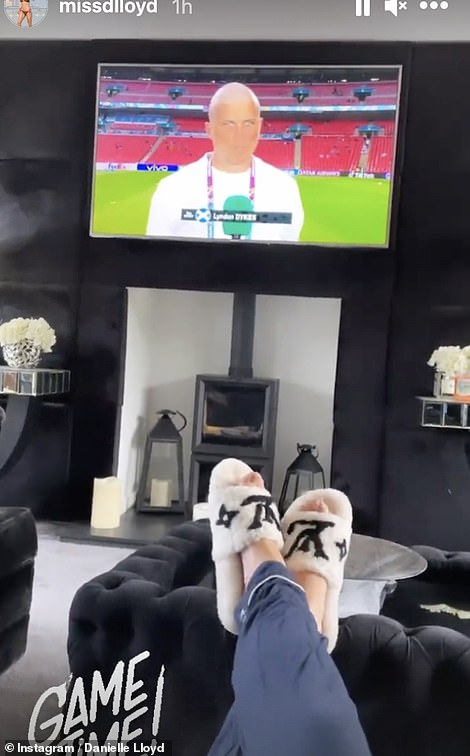 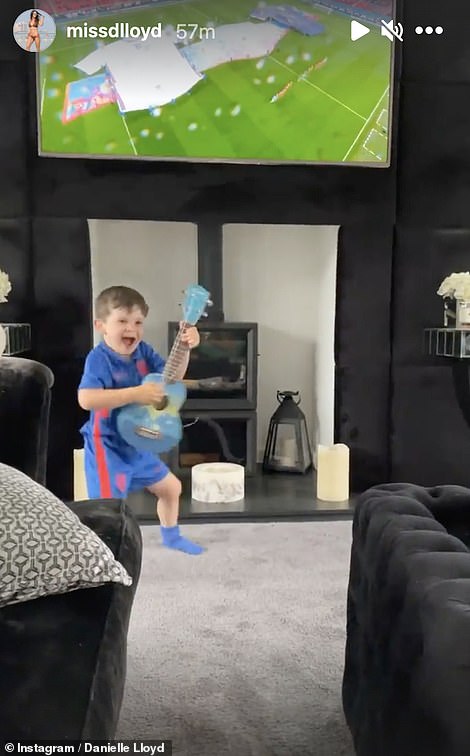 Come on England! Former WAG Danielle Lloyd kicked back and tuned into the match from home while relaxing in Louis Vuitton sliders, with one of her little boys donning an England kit and playing a guitar while the players took to the pitch 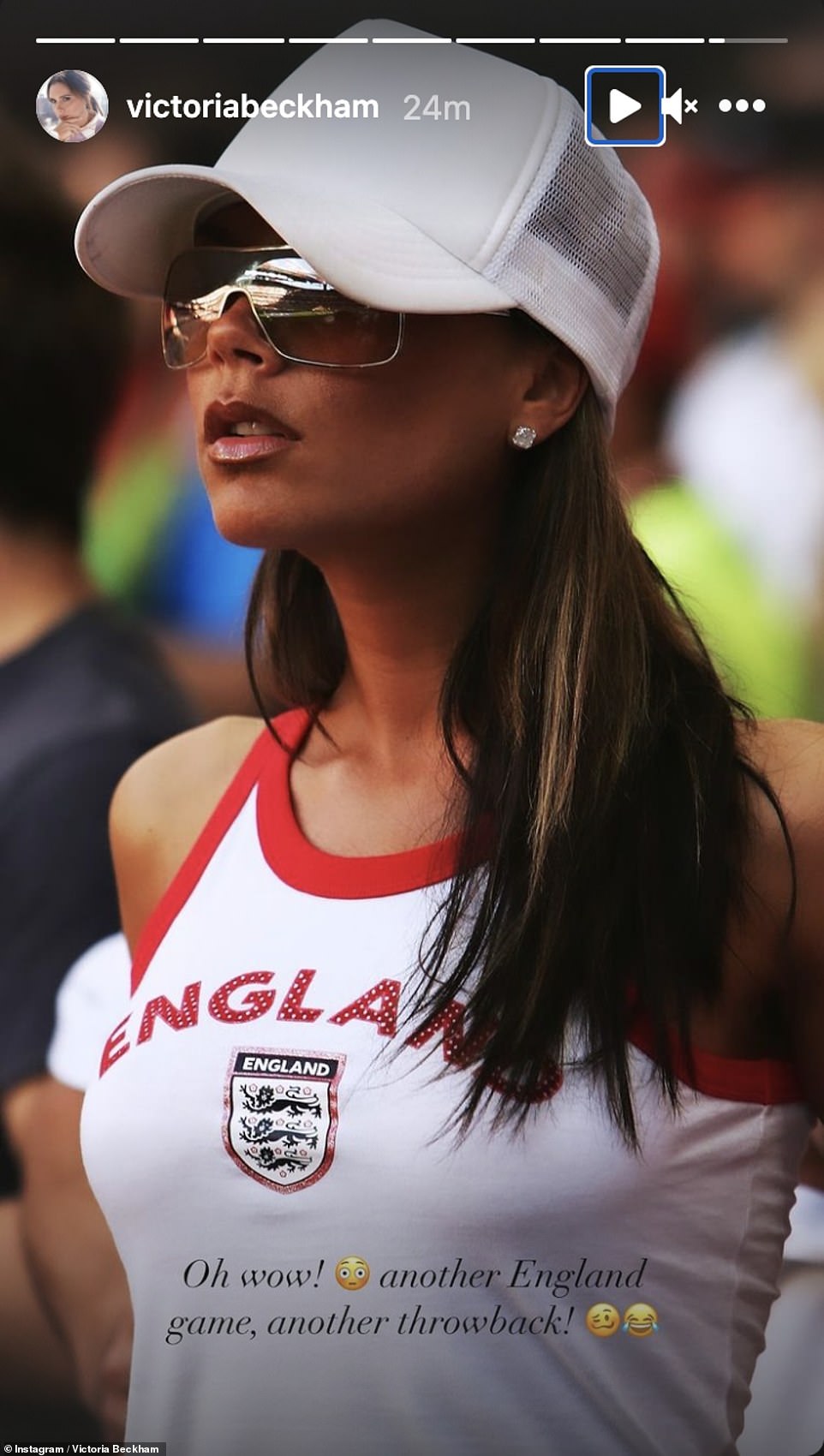 Memories: Victoria Beckham shared another throwback from her days cheering for husband David at England games

But before kick off fans booed both countries’ national anthems as well as when both teams took the knee in a show against racism.

It comes after 20,000 Scottish fans turned London into mayhem over the last two days, with punters fighting, stripping naked and swimming in public fountains.

Police admitted they had to ‘flexibly’ manage the huge swathe of Scotland fans who took over the West End earlier on Friday with no social distancing, showering any England supporters brave enough to go near them with beer.

Earlier in the day, Scottish football fans parted to allow the Three Lions fans walk past – then tossed booze over them as they hurried by and let off blue and white smoke flares chanting: ‘I’d hate to be English’. 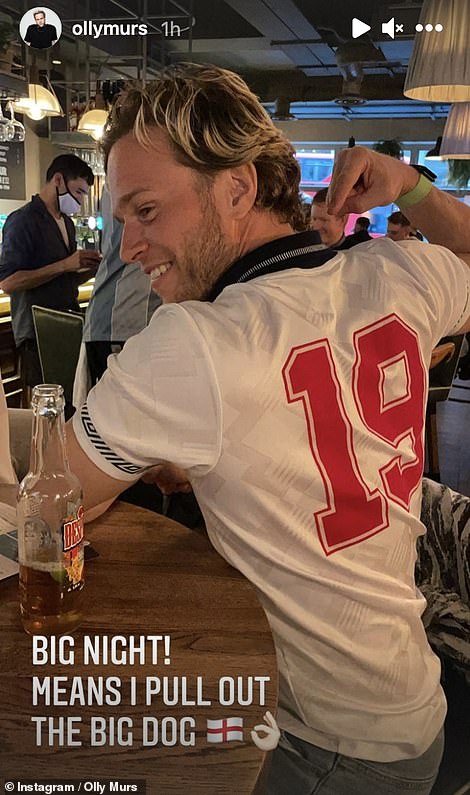 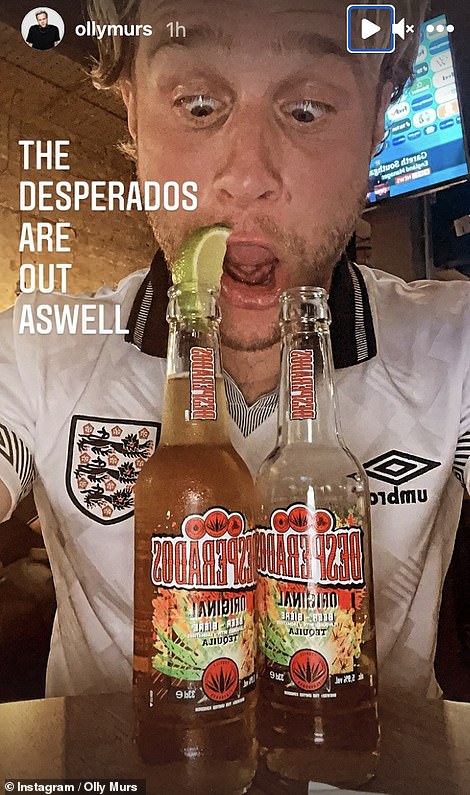 That’s the spirit! Olly Murs sported his England shirt for the game and enjoyed a couple of Desperado drinks at the pub 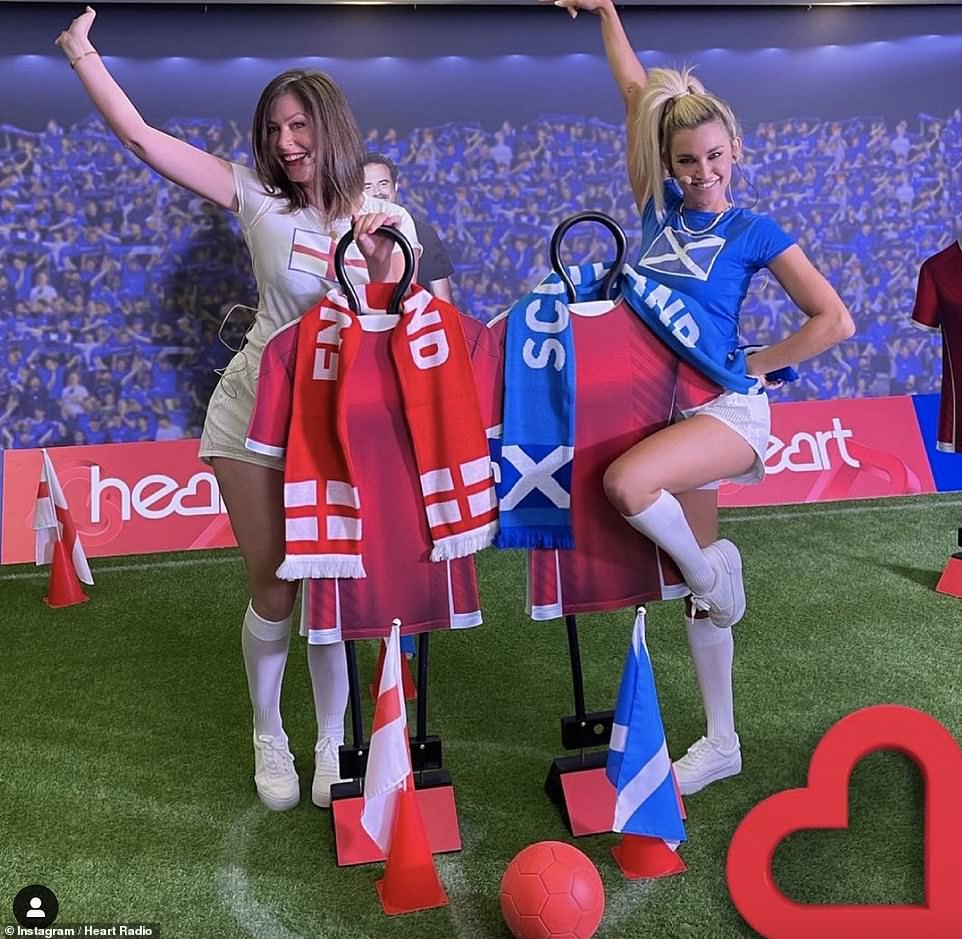 Cheering them on! Radio presenters Lucy Horobin and Ashley Roberts donned garb supporting England and Scotland as they helped built the hype surrounding the game on Friday 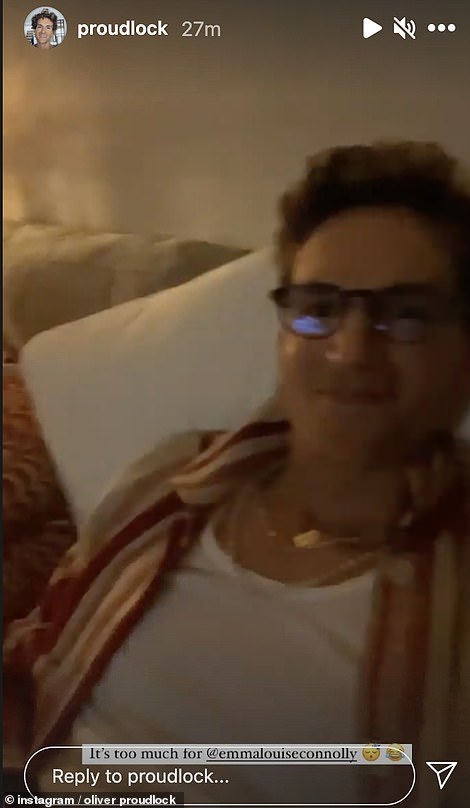 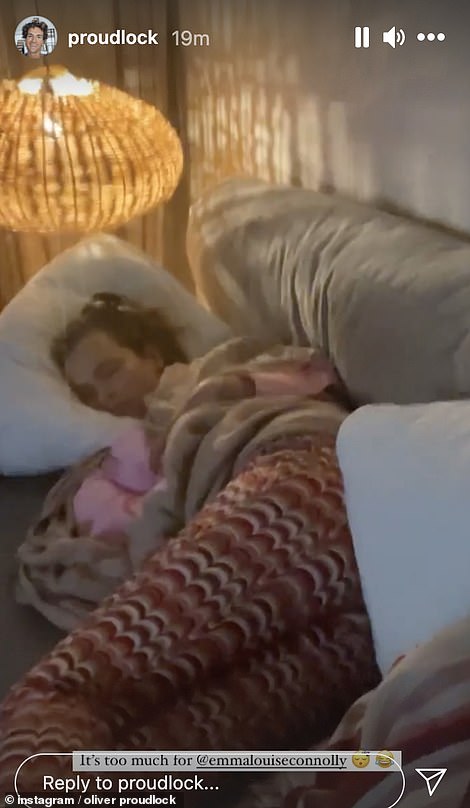 ‘It’s too much’: Oliver Proudlock revealed his wife Emma Louise Connolly had fallen asleep during the first half

The Tartan Army had been in the pub at 10am, trashing central London and leaving the capital’s landmarks strewn with detritus having completely ignored pleas from Mayor Sadiq Khan and the Met Police to stay away.

They flouted a Scotland Yard two-day order warning them not congregate in the West End from 3pm yesterday – and instead they partied in Leicester Square where they danced in fountains they filled with foam into the night.

On Friday afternoon, officers admitted defeat in trying to move on the fans and said they would implement a ‘flexible policing plan… to reduce the likelihood of crime, disorder and anti-social behaviour’.

Chief inspector Joe Stokoe said: ‘We have contingency plans to deal with any number of potential incidents as they arise but my message is clear: if you don’t have ticket to the matches, fan zone or officially booked into a pub, bar or club, please do not come to London – you could end up missing the game. 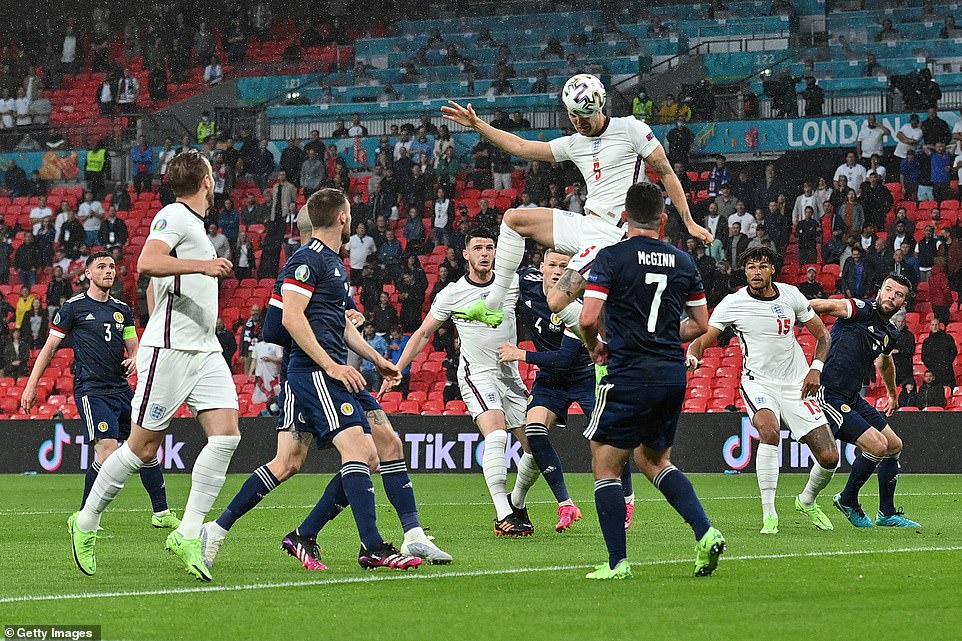 On the pitch: John Stones of England hits the post from a header during the UEFA Euro 2020 Championship Group D match between England and Scotland at Wembley Stadium