Euro 2020: STEPHEN McGOWAN – This was an old-fashioned British slugfest and keeps Scotland alive


After a performance of courage, organisation and guile Scotland are still in the fight. A Wembley display as brave and gung ho as Steve Clarke’s team selection preserved hopes of progression to the last 16 of the Euro 2020 finals.

Make no mistake. An old timer closing his eyes at Wembley would have felt as if he was back in the 1970s. Players in dark blue going toe to toe with more fancied opponents. A lubricated Tartan Army in full voice and scenes of raucous caledonian at time up. This time, at least, the goalposts lived to fight another do.

So do Scotland after a scoreless draw which tees up a do or die Group D clash with Croatia at Hampden on Tuesday. After two games Clarke’s side have yet to score a goal. Yet the nonchalant excellence of Billy Gilmour, the 20-year-old Chelsea midfielder making his first start in a dark blue shirt, felt like a shot in the arm for a team beaten 2-0 by the Czech Republic on Monday. 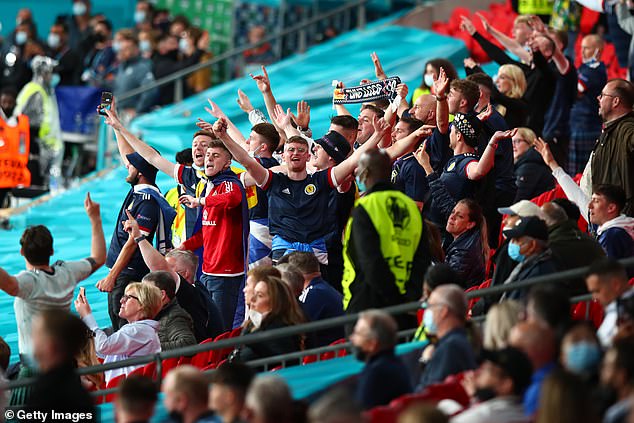 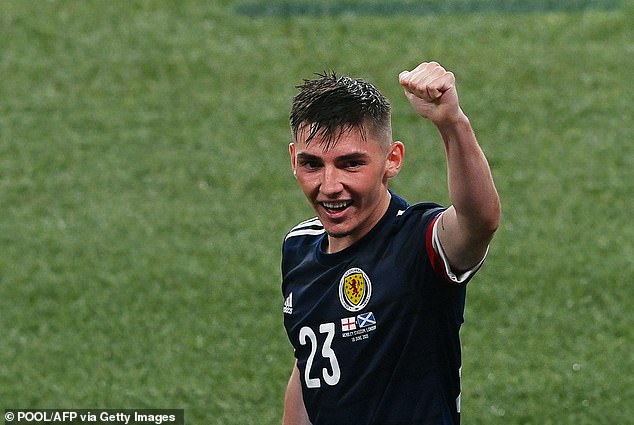 The real winners were the Channel 5 programme schedulers. A decision to show Braveheart at 10pm paid off with bells on after England spent 90 minutes failing to break both a football team and a nation’s pride.

As well as Gilmour, Clarke brought in Che Adams, Callum McGregor and the fit-again Kieran Tierney. The Arsenal defender was immense. From a Scottish perspective they all were.

History was firmly against the visitors. The 115th fixture between the two old rivals, was also the 33rd meeting at Wembley. Only four times in the modern era – 1967, 1977, 1981 and 1999 – had Scotland actually won. But for a superb Jordan Pickford save and a goalline clearance from Reece James they might have taken all three points. They rode their luck at times for sure – most notably when John Stones smashed an early header against the post.

Yet from the moment Scots striker Lyndon Dykes wiped out Luke Shaw after seven seconds it was clear the visitors had pitched up in London to compete. While England have one foot in the knockout stages after four points from two games the Scots still work to do yet. If nothing else they’re in with a chance. 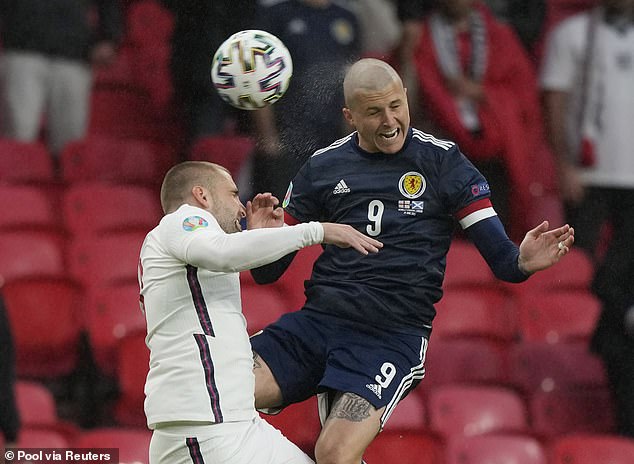 Almost as eye-raising as Clarke’s decision to field Gilmour was his determination to stick by right wing-back Stephen O’Donnell. The Scotland boss bristles in defence of the Motherwell defender, feeling too many are quick to judge him by the club he plays for rather than the way he plays. More than once in the opening first half the defender came close to delivering a gigantic two finger salute to his many critics.

The first was after four minutes when he crafted a shooting chance for Adams. A first time effort was blocked comfortably by the knee of John Stones, but looked like another signal of aggressive intent.

Scotland’s main channel of attack was always expected to come on the left where the fitness of Kieran Tierney allowed the Arsenal man to dovetail once more with Liverpool’s Andrew Robertson.

The way these two work together you wonder why anyone ever argued it had to be one or the other. 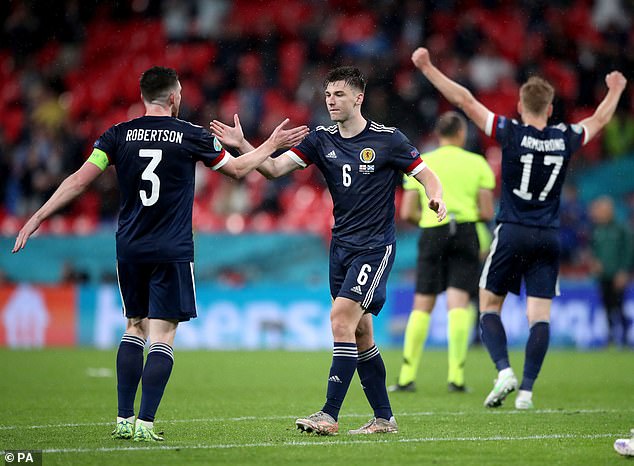 After half an hour they carved out Scotland’s best chance, Tierney cutting inside Reece James on the left flank to float a cross on to the right foot of the much-maligned O’Donnell. Had his controlled volley crept in at the far post the right-back could have retired there and then. He couldn’t have answered his critics any better. To Scotland’s anguish Jordan Pickford threw himself brilliantly to the right to produce a terrific stop.

England’s best spell of the half could easily have blown their opponents away. After 12 minutes their first corner should have finished up in the net when John Stones lost his disorientated marker Lyndon Dykes to bullet a Mason Mount corner off the upright. It’s still shaking now.

After surviving one huge scare Scotland calamitously failed to learn their lessons. Scott McTominay was slotted back into a back three to take advantage of his passing ability. Yet the Manchester United’s comfort on the ball was tested when he surrendered possession to Raheem Sterling in his own half. It’s hard to think of a worse man to lose the ball to, the Man City winger’s low ball centre picking out Mount running in at the near post. A terrific chance, he slotted it wide. 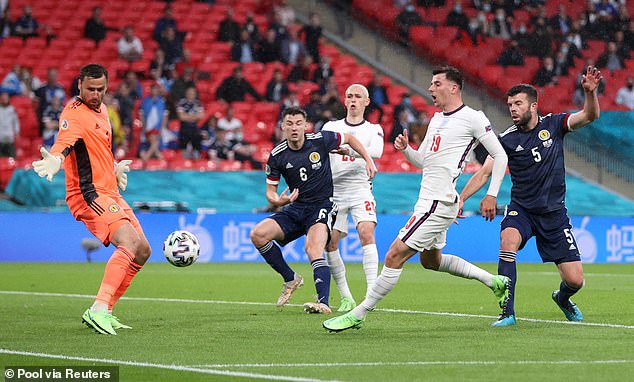 Listen, England were always like to dominate possession and make the chances. The offside flag was a welcome relief to Scotland fans more than once when Phil Foden and Harry Kane found chinks of light. Yet the first half ended with the Tartan Army in full, buoyant voice. Things were going better than expected.

England had the bit between their teeth after the restart. They had to find away to rise above the passion and the the emotion and the organisation of their opponents and think their way through.

Mason Mount’s thumping right foot shot from 20 yards gave David Marshall his first *real* save three minutes. That England took that long to test him was remarkable in itself. His positioning criticised for the Patrik Schick Czech wondergoal Scotland’s keeper judged this one fine.

You wondered after that if Scotland had run their race. If England would simply move through the gears and pull away. Not a bit of it.

After an hour this was the old game the way it used to be. Embroiled in a catchweight contest Scotland were defending with guile, focus and concentration, hitting England on the counter with purpose. But for a terrific bit of goalline defending after 62 minutes Clarke’s team would have claimed an improbable lead. 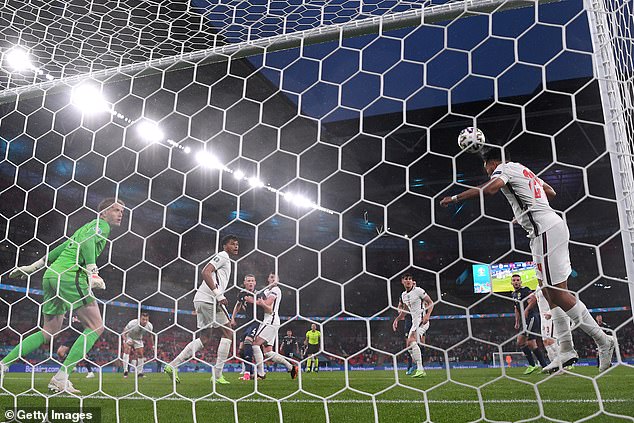 After passing up chances against the Czech Republic Lyndon Dykes was ridiculously close to redeeming himself when he thrashed an angle left foot strike through a ruck of bodies towards the postage stamp corner. Gareth Southgate’s decision to pick James ahead of Kyle Walker was justified when the Chelsea right back brilliantly headed the netbound effort off the line.

After warming up on the sidelines awaiting his chance, the call came for Jack Grealish. Southgate’s decision to remove Phil Foden from the fray left the England fans unimpressed. For Scotland it was source of respite, albeit short lived. Marcus Rashford was on his way for Harry Kane.

As the game entered the final half hour the game was an old fashioned British slugfest. Precisely the game, in short, England didn’t want.

Minutes after Gilmour left the fray to be replaced by Stuart Armstrong after a performance of composure and guile, Che Adams saw glory before him at the back post. The angle was tight, the volley never easy. As the finish from Andy Robertson’s cross fizzed wildly wide, however, you wondered once again what this Scots side might achieve if they could score a goal or two. Croatia on Tuesday would be a good time to start. 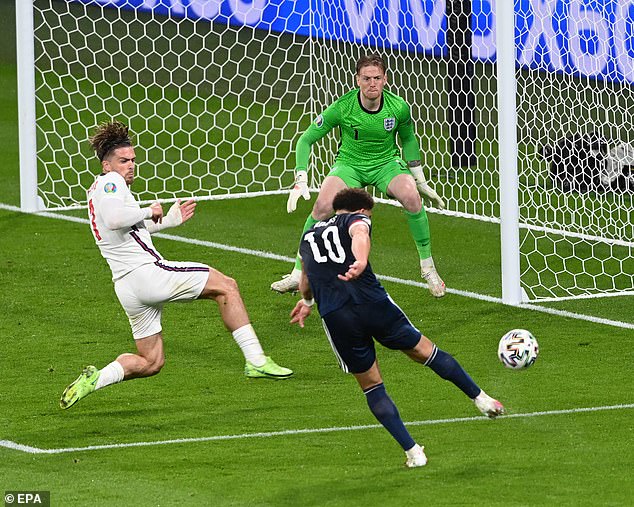 Prince William ‘split his household from Harry’s after the brothers had an angry row’, author claims