Euro 2020: Which shock is the biggest in European Championship history?


The European Championship has thrown up plenty of surprises during its 60-plus years – from shock titles for Denmark and Greece to Iceland’s unexpected heroics.

BBC Sport has teamed up with data experts Gracenote to uncover the 10 biggest shocks in Euros history, but of course we also want you to have your say.

The most recent tournament, Euro 2016, was the most unpredictable in the tournament’s history, with 29% of matches being won by the underdog, a tally that included Portugal’s victory over hosts France in the final.

With Euro 2020 just days away, what better way to get in the mood for this summer’s tournament than to refresh your memory about the greatest surprises over the years?

Here they are from 10 to one, as assessed by Gracenote. You can vote for your favourite at the bottom of the page…

World Cup winners two years earlier, England faced Yugoslavia for a place in the final of the 1968 European Championship in Italy.

But it was not to be for Alf Ramsey’s men this time around.

A squad featuring Bobby Moore, Bobby Charlton, Gordon Banks and Geoff Hurst had hopes of another trophy. But Dragan Dzajic fired past Banks in the 86th minute to end their hopes of another memorable triumph.

Holders West Germany required only a point to progress to the semi-finals as group runners-up in 1984 – and they were certainly fancied to get it.

Spain had other ideas, however, as Antonio Maceda’s 90th-minute goal stunned Jupp Derwall’s side.

The late winner sent the Germans home and saw Spain clinch top spot before losing in the final to France. 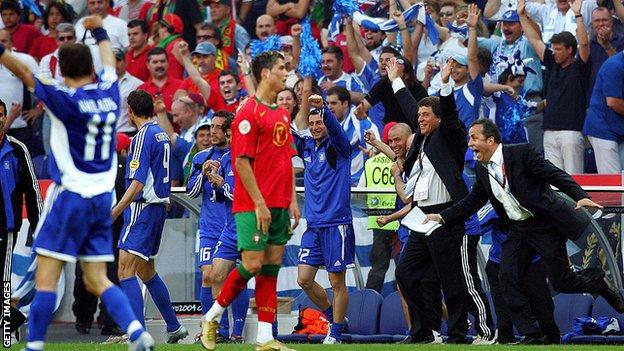 One magical summer will never be forgotten in Greece, as the nation pulled off one of football’s greatest shocks to win Euro 2004.

That final victory against hosts Portugal ranks as the most surprising result in a Euros final (24.5% chance) – but it fails to make the cut here.

That’s because the unfancied Greeks had already beaten Luiz Felipe Scolari’s men in their opening group game, as goals from Georgios Karagounis and Angelos Basinas sealed victory despite Cristiano Ronaldo’s late response. Even then, nobody predicted what would follow. 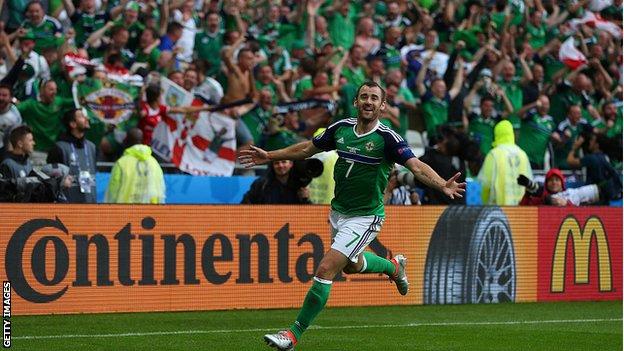 “It is probably something that might not fully sink in for another 30 or 40 years.”

That was Niall McGinn’s view four years on from scoring his famous goal at Euro 2016 which, after Gareth McAuley’s header, sealed a 2-0 victory over Ukraine. It was Northern Ireland’s first win at a major finals since 1982.

That one group-stage victory was enough for Michael O’Neill’s men to earn qualification for the knockout stages too.

“When you go out on that park today, you’ll be doing something that no other Scottish player has ever done,” Scotland head coach Andy Roxburgh said to his players before the nation’s Euros debut in 1992.

After opening defeats by the Netherlands and Germany, Scotland were eliminated – but claimed a memorable first victory at the tournament against their final group opponents, the Commonwealth of Independent States (CIS) – formed after the dissolution of the Soviet Union.

Paul McStay, Brian McClair and Gary McAllister earned a 3-0 victory to ensure Roxburgh’s side left with their pride intact. 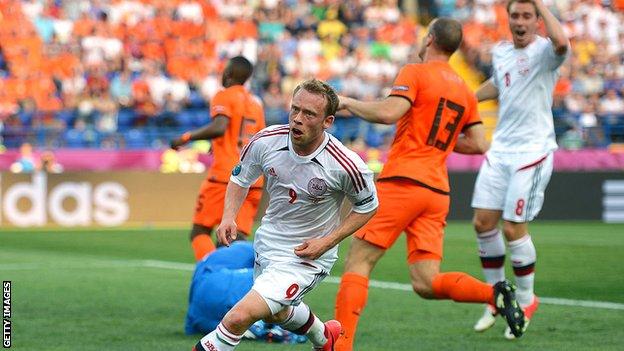 “We can say we are a little jealous of the Dutch team, that we are not in their shoes. They are the favourites. There is no doubt about that.”

It appeared an honest statement by Denmark coach Morten Olsen at the time, and even Netherlands coach Bert van Marwijk was lulled into admitting his side were favourites in 2012, but in hindsight it may all have been mind games.

The Netherlands – World Cup runners-up two years earlier – were stunned by Michael Krohn-Dehli’s first-half strike, and went on to lose all three of their games.

Denmark, despite their surprise win, also failed to make the knockout stages. 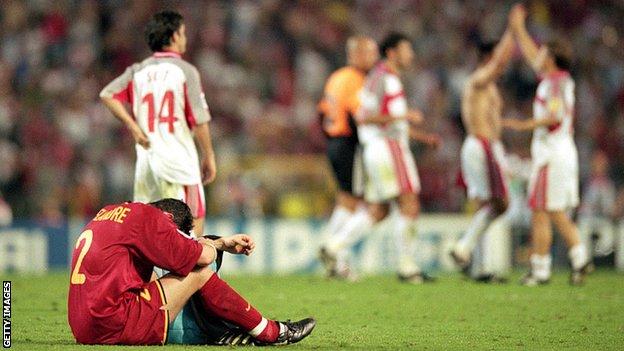 “This is a great gift for the whole of Turkey,” Turkey coach Mustafa Denizli said. “This is the best achievement in 77 years of Turkish soccer history.”

Denizli’s elation followed Turkey’s 2-0 defeat of Belgium at Euro 2000, which simultaneously sealed his nation’s first ever appearance in the knockout stages of a major tournament, and eliminated the co-hosts.

Hakan Sukur scored both goals for the underdogs, who had taken only one point from their first two games. 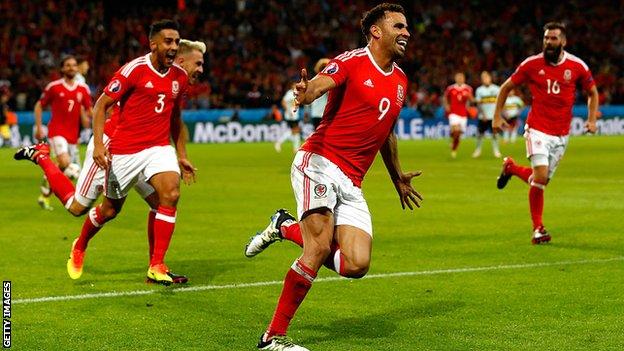 “If I was a chairman of a Premier League club I would be making Hal Robson-Kanu my next signing,” said former Wales forward John Hartson.

“What a goal. He sent Thomas Meunier for a cup of tea and a piece of toast with that turn.”

The greatest night in Welsh football history ranks as the third greatest Euros shock of all-time, with Robson-Kanu’s sensational turn and finish – as attested to by Hartson – the highlight of an unforgettable victory in 2016.

Radja Nainggolan had put Belgium ahead with a strike from 25 yards, but goals from Ashley Williams, Robson-Kanu – who did not even have a club – and substitute Sam Vokes turned it around. 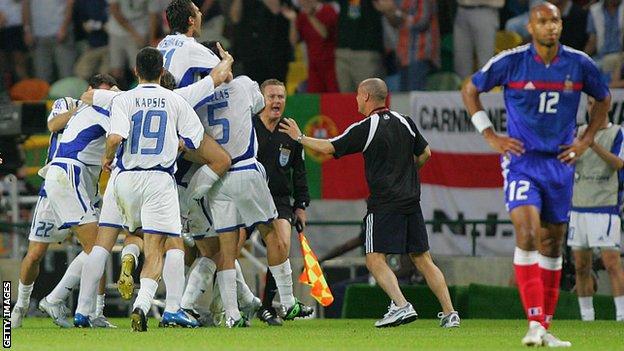 “This is the greatest moment in Greek football,” declared matchwinner Angelos Charisteas.

At the time it was a fair comment, as Otto Rehhagel’s side booked their place in the semi-finals of Euro 2004 by dumping out holders France.

Les Blues could offer no response to Charisteas’ second-half header as the Greek’s fairytale summer continued at the expense of a French side which boasted Zinedine Zidane, Robert Pires and Thierry Henry.

But Charisteas’ comment soon became out of date – because there were even greater moments to come. Greece would go on to beat the Czech Republic 1-0 in the semi-final, before claiming their first and only major title, beating Portugal in Lisbon. 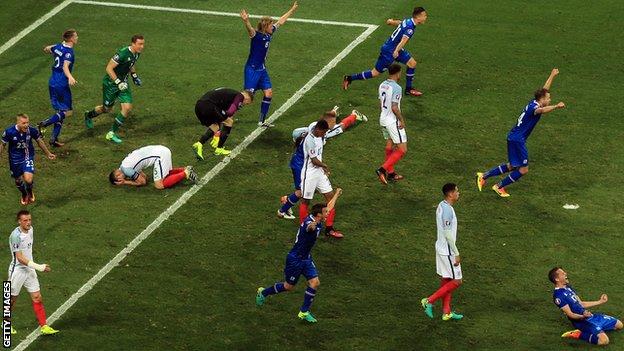 “We all believed. The rest of the world didn’t but we did.”

Those were the words of defender Kari Arnason, after he and his Iceland team-mates recorded, statistically speaking, the most unlikely result in the competition’s history and condemned Roy Hodgson’s England to surely their most humiliating defeat in any competition.

In what was described by former England striker Alan Shearer as “the worst performance I’ve ever seen from an England team”, Iceland came from behind to beat the Three Lions 2-1 in the last 16 in 2016.

Wayne Rooney’s fourth-minute penalty suggested an easy evening lay ahead for England, but Ragnar Sigurdsson and Kolbeinn Sigthorsson turned the game on its head within 14 minutes and the final whistle was swiftly followed by Hodgson’s resignation.

Vote for what you believe is the biggest shock in Euro history below.

How can I avoid side-effects of blood pressure drugs? DR MARTIN SCURR answers your health questions