Boris Johnson today hailed the European Parliament’s approval of the post-Brexit trade deal as the ‘final step’ towards a new relationship.

The PM said it is ‘time to look to the future’ after the result of the vote was announced in Brussels this morning, with 660 MEPs in favour and just five opposed.

European Commission president Ursula von der Leyen also welcomed the green light – but delivered a warning shot that it must be ‘faithfully implemented’.

The ballot took place yesterday, but coronavirus working restrictions meant the result was not immediately declared.

The trade agreement has been provisionally in force since being agreed by Boris Johnson and Ursula von der Leyen before Christmas.

Both sides will hope it can draw a line under four years of acrimonious negotiations and debate.

Mr Johnson said: ‘This week is the final step in a long journey, providing stability to our new relationship with the EU as vital trading partners, close allies and sovereign equals.

‘Now is the time to look forward to the future and to building a more Global Britain.’ 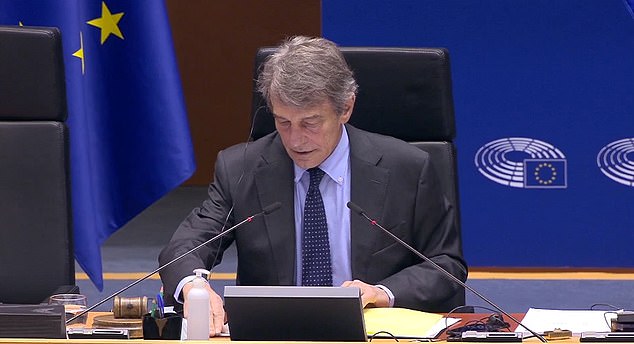 The result of the vote was announced in Brussels this morning, with 660 MEPs in favour and just five opposed

There had been fears that the European Parliament was withholding approval as a pressure tactic in the row over the Northern Ireland protocol.

Ms von der Leyen welcomed the vote and said the Trade and Co-operation Agreement ‘marks the foundation of a strong and close partnership with the UK’.

But in an acknowledgement of EU concerns about the Prime Minister’s approach to deals with Brussels, she warned that ‘faithful implementation is essential’.

Leading MEP Guy Verhofstadt tweeted: ‘The @Europarl_EN approves the EU – UK trade & cooperation agreement! The first trade deal in history to put up barriers & remove freedoms? A failure for both sides, but better than nothing.’

In a speech during the debate yesterday, Ms von der Leyen warned Mr Johnson the European Union ‘will not hesitate’ to take action against the UK if it breaches the terms of the trade deal.

She warned that the pact has ‘real teeth’ and ‘unilateral remedial measures’ will be deployed ‘where necessary’. 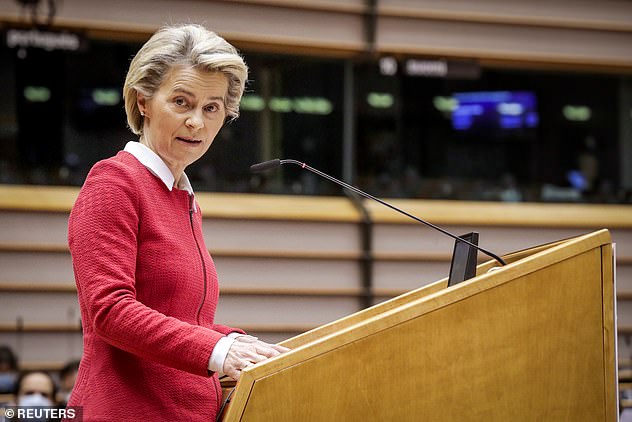 Ursula von der Leyen, pictured today addressing the European Parliament in Brussels, warned Boris Johnson the EU ‘will not hesitate’ to take action against the UK if it breaches the terms of the Brexit trade deal 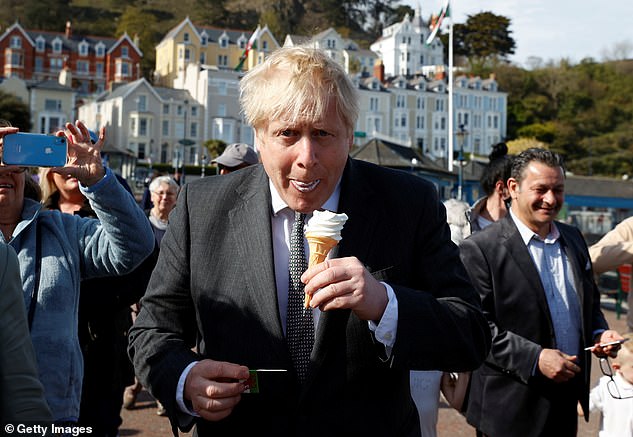 MEPS will today finally vote for the Trade and Cooperation Agreement which the EU agreed with Mr Johnson on Christmas Eve last year. The PM is pictured in Llandudno yesterday

Her warning shot came amid a rumbling row between the UK and the EU over the Northern Ireland Protocol which was agreed as part of the original Brexit divorce deal.

Addressing the European Parliament, Mrs von der Leyen said: ‘This agreement comes with real teeth. With a binding dispute settlement mechanism and the possibility for unilateral remedial measures where necessary.

‘Let me be very clear: We do not want to have to use these tools. But we will not hesitate to use them if necessary.

‘They are essential to ensure full compliance with the TCA and with the Withdrawal Agreement.’

Mrs von der Leyen noted concerns in the EU that the UK had not yet fully complied with the terms of the Brexit divorce deal and stressed that ‘vigilance’ would be required in future when it comes to sticking to the terms of the trade deal.

Relations between the UK and EU have been strained over the application of the Northern Ireland Protocol which governs the post-Brexit arrangements aimed at preventing a hard border with Ireland.

Much of the disruption and controversy created by the protocol relates to the fact that Great Britain has left the Single Market for goods, while Northern Ireland remains in the EU regulatory zone.

That necessitates a significant number of documentary checks and physical inspections on agri-food goods arriving into Northern Ireland from Great Britain.

The UK has unilaterally extended grace periods covering areas of the economy including supermarket supplies and parcel deliveries to Northern Ireland from Great Britain, meaning post-Brexit checks are not yet fully applied – which has triggered a legal dispute with Brussels.

Mrs von der Leyen said there was a need for ‘joint solutions’ as ‘unilateral decisions will get us nowhere’.

She said there had been ‘some progress’ in talks on improving the protocol between commission vice-president Maros Sefcovic and the UK’s Brexit Minister Lord Frost.

When associates of the smaller Pennsylvania chapter of Secular Democrats of The united states log on for their month to month conferences, they're not there for a virtual...

Doodled videos can do wonders for you and your enterprise, only if you know how to create it in the right way. Having said that, it can take...

Elon Musk also states that in the extended time period, Neuralink's chip could be applied to meld human consciousness with synthetic intelligence — although experts are skeptical of...

King of the castles (and home to The Smallest House In Great Britain): Wales may be out of the World Cup - but the medieval town of Conwy...