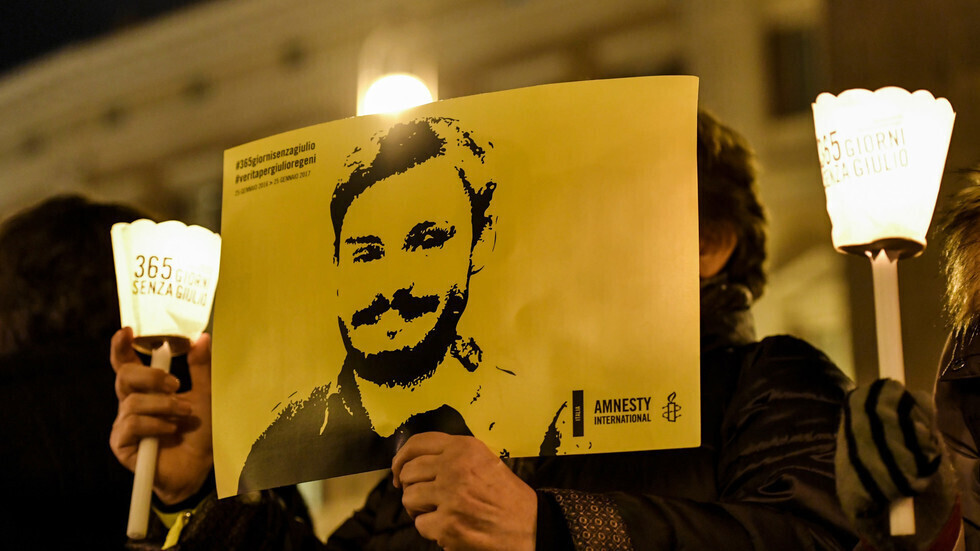 A person holds a picture of Julio Regeni during a stand in Rome on January 25, 2017 to commemorate his death.

An informed European source said that the case of the Italian researcher, Giulio Regeni, who was found dead in Egypt in 2016, will be discussed during the next meeting of the foreign ministers of European Union member states.

The source, who preferred to remain anonymous, as reported by the Italian “Aki” agency, said Friday that the aim of the discussion expected at the meeting, next Monday, is to listen to a briefing on this matter by the Italian Foreign Minister, Luigi Di Maio, and to reach conclusions. Specific and consultative steps to be taken.

The source emphasized that the member states are the final decision makers regarding the next steps towards Egypt, noting that “this issue is important for Italy and the European Union as well.”

The source pointed out that the Europeans had reached a conviction that the developments in the Regeni case should be taken into account when talking about the future of relations with Cairo.

The case of Regeni, an Italian doctoral student from the University of Cambridge in Britain, who disappeared on January 25, 2016 in Cairo, and was found on February 3, killed with signs of torture on his body, sparked tensions in relations between the two countries after Rome accused the Egyptian authorities of not cooperating enough in Investigation and attempt to disclaim responsibility for the accident.

Egypt denies allegations about the involvement of its security services in the killing of Regeni, and the Egyptian authorities initially said that the Italian student died in a traffic accident, but later stated that he was killed by a criminal gang that the police managed to eliminate.

Donald Trump breaks his post-White House silence to say: 'We'll do something'

Coronavirus: Parts of country have already dished out first doses to nearly 90% of 70-74 year olds

US election 2020: ‘Trump’s done what he said he would for business’