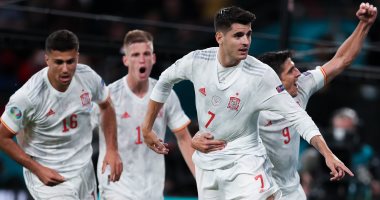 The Spanish national team will host its Georgia counterpart, at 9:15 pm, today, Sunday, at the “La Cartuja” stadium in Seville, as part of the fifth round of Group B matches, in the European qualifiers for the 2022 World Cup.

Spain is in second place in Group B with 7 points, two points behind the leaders Sweden, while Georgia is in the fifth and last place with one point..

According to the Spanish newspaper Sport, Luis Enrique is expected to enter the match against Georgia with a formation consisting of:

The Spain team, led by coach Luis Enrique, is trying to win tonight’s meeting, in order to restore balance after losing against his Swedish counterpart with two goals against a goal in the fourth round last Thursday, to lose El Matador to the top of the group..

Spain will regain the top spot in the group temporarily if they beat its Georgian guest today, taking advantage of the fact that Sweden did not play a match in the current round..

He will visit Kosovo on Wednesday in the sixth round of qualifiers, while Sweden will visit Greece on the same day..

In today’s match, Spain is missing the efforts of its striker, Gerard Moreno, who was injured during the match against the Swedish national team, which ended with the loss of El Matador 2-1, as he left the stadium in the 64th minute, affected by the injury, and Adama Traore participated in his place..

The loss of Spain against Sweden in the last round is the first for the Matador team in the World Cup qualifiers in more than 28 years..

And the “Opta” statistics network stated that the Spanish national team suffered its first defeat in the World Cup qualifiers since March 1993 against Denmark (1-0), to end a series of 66 matches in the qualifiers without defeat (52 wins and 14 draws).).