Evacuation of hundreds queuing for Covid jabs at Science Museum

The Science Museum was today evacuated for an hour amid reports of a ‘suspicious bag’.

Staff at the London museum, which is being used as a coronavirus vaccination centre, said at 1.54pm that the premises had been evacuated ‘as a precaution’.

One attendee at the South Kensington attraction tweeted at the museum: ‘You’ve moved hundreds of us in an evacuation exercise with no information and you can’t open the exit door. What’s going on?’

Another claimed that a security said they found a ‘suspicious bag and didn’t know what was in it… Got everyone out’.

The museum’s Twitter account revealed at 2.50pm that the venue has reopened to visitors – repeating that the evacuation was ‘a precaution’. 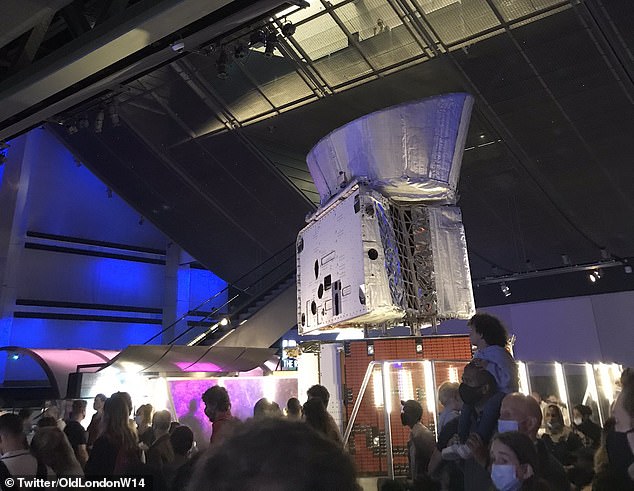 The Science Museum has been evacuated ‘as a precaution’, staff at the London venue have said

One attendee tweeted at the museum: ‘You’ve moved hundreds of us in an evacuation exercise with no information and you can’t open the exit door. What’s going on?’

The museum had offered its premises for use as a vaccination centre, and those who attended would be able to see a quick preview of its new Covid display.

Empty vials of the first vaccines use across the world are being showcased along a timeline of important objects from the history of vaccines.

Also among the collection are homemade masks, Covid-themed greetings cards, recording the current crisis so future generations can learn from it.

The museum’s director Sir Ian Blatchford had told the FT: ‘Our museum can both tell the story of how vaccination has saved millions of lives, and also play a part in ensuring vaccines protect the nation from Covid-19.

‘It is an extraordinary sensation to be collecting and living history all at once.’

Marketing gold: How to get publicity for your small business

Opinion: Naomi Osaka walks rather than talk, furthering the death of press conferences

NATO statement on China goes ‘much further’ than prior language, expert says

Having arrived in Venice over the weekend, Katy Perry and Orlando Bloom enjoyed a romantic stroll as...