Exeter 42-0 Glasgow: Sam Simmonds sparks rout as defending champions overpower visitors and get back in the groove in Heineken Champions Cup

The Simmonds brothers ignited Exeter’s defence of their European title at Sandy Park on Sunday as Rob Baxter’s side delivered a thunderous, record-breaking statement of intent by dismantling Glasgow.

When Devon’s double-winners edged out Racing 92 to win the 2020 Heineken Champions Cup final just 57 days earlier, captain Joe Simmonds was man of the match and No 8 Sam was named Player of the Season hours later.

The Chiefs’ home-grown siblings were back in a familiar routine in this opening fixture of their new campaign, with Sam scoring the hosts’ first try and fly-half Joe eventually kicking 12 points. 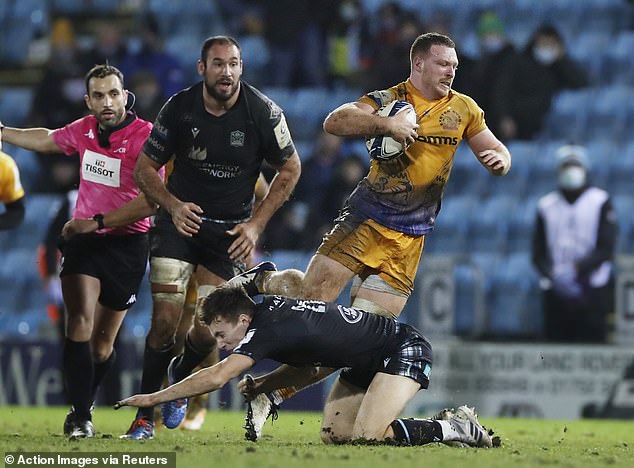 Exeter were utterly imperious — far too strong for their Scottish opponents in front of 2,000 fans. Having won the Premiership and the continent’s top prize in front of deserted stands, the home side were granted a fitting ovation for their recent feats before kick-off and duly lived up to their status.

Two of Glasgow’s former players came back to haunt them as Jonny Gray and Stuart Hogg scored tries for the Chiefs, but the tone had been set by the Simmonds double act. The opening salvo in this bonus-point rout was a lineout drive try on the right, finished off by super Sam — who went on to be named man of the match yet again. His brother converted from a wide angle to launch a typically assured performance.

The No 10 finished up with six conversions from as many attempts as Exeter recorded their biggest ever victory in Europe. There were a few uncharacteristic errors as they eased into their stride, but by the end they had long since achieved complete dominance, with flashes of attacking fluency on the back of their supremacy up front.

This was the display of a team comfortable with being up on a pedestal with targets on their backs. There were no signs that Baxter’s men are fazed by being the team to beat. They are the English standard-bearers once again — perhaps alone as bona fide challengers from the Premiership, given Saracens’ absence. 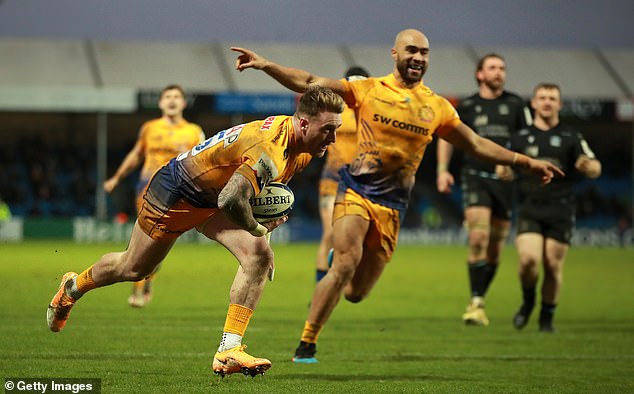 On Sunday, Exeter will face a test of their credentials when they go toe-to-toe with Toulouse in the south of France. This win will give them precious belief but the task that awaits is an onerous one. If the Gallic heavyweights can be overcome, Exeter’s title defence will have real momentum.

Glasgow won a third-minute scrum penalty yesterday but the resulting kick was off target and that was more or less the end of their challenge. The Chiefs took a firm grip on the set-piece contest and all the contact areas. The visitors tried to spoil the Devonians’ renowned driving game, to no avail. There was a sense of inevitability about proceedings.

Sure enough, after Sam Simmonds touched down, Gray added a second try from close range in the 23rd minute. Shortly after the break, Exeter’s third arrived with more of a flourish from a kick return. Olly Woodburn burst through on the right, drew the last defender and sent Hogg over in the corner.

The bonus point was secured with 26 minutes to go as Jack Yeandle capitalised on a lineout lapse from Glasgow, but Exeter didn’t let up. In the closing stages they ran amok, with Woodburn and Jonny Hill adding further tries.

The bandwagon is rolling again. These Chiefs want to stockpile precious metal.

Head coach Ali Hepher said: ‘As a coach you worried about a hangover from last season or the lads taking their foot off the pedal but that’s not happened. The big thing I’ve noticed is the confidence. We know how to win these games. We know how to deliver.

‘With the age of this squad, these players could be together for another six years. That means we can kick on and go after more trophies.’

Gordon Ramsay’s children Jack, Tilly and Holly spend the day on their dad’s boat in Cornwall

Girl Kitty Spencer's father Charles was notably absent from her lavish wedding ceremony in Rome on...