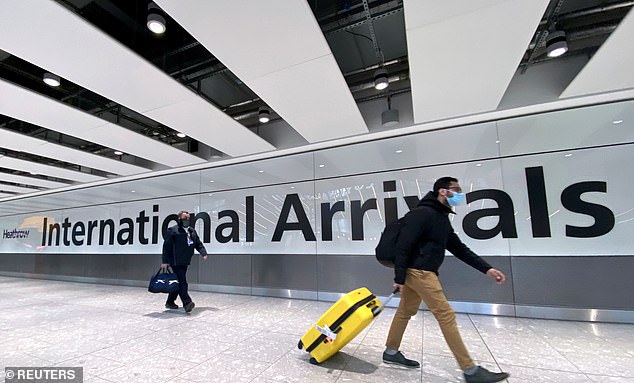 Quarantine hotels could become Covid infection hotspots due to the type of ventilation systems they use, a hotel group chief has today claimed.

He warned this could increase the risk of the virus spreading between guests and staff.

Mr Nawab also warned that airport hotels often use central air conditioning systems – rather than individual units – and sometimes have windows that cannot be opened.

The warning comes as union chiefs today said the quarantine measures were not enough to prevent Covid variants spreading in the UK.

The GMB union also raised concerns about its members interacting with arrivals from ‘red listed’ countries as part of the quarantine hotel scheme.

The measures, which come in from midnight tonight, will mean passengers arriving from 33 ‘red list’ countries will be forced to quarantine in designated hotels for 11 nights.

Quarantine hotels could become Covid infection hotspots due to the type of ventilation systems they use, a hotel group chief has today claimed. Pictured: Arrivals  at Heathrow Airport yesterday

Meher Nawab, chief executive of the London Hotel Group, warned airport hotels often rely on central air flow systems, which he said raised the risk of the airborne virus spreading between guests and staff. Pictured: Cones are set up at Heathrow ahead of the new quarantine scheme

Passengers will have to pay £1,750 for their stay in the hotel, which includes the cost of their room, the transport, food, drink, security and cleaning costs.

A paramedic couple returning to the UK with their five-week-old daughter after four years living in Abu Dhabi have said travellers should not be used as ‘guinea pigs’.

From Monday, UK nationals or residents returning to England from 33 countries will be required to spend 10 days in Government-designated quarantine hotel at a cost of £1,750 for an individual.

The regulations have been published just days before the scheme becomes law.

But border guards and Heathrow airport have spoken today of how they feel under-prepared for the new rules, with officials saying earlier today that they feel powerless to stop travellers who may ‘leg it’ from airports to avoid quarantining.

A Heathrow spokesman said on Saturday that the government’s plan has ‘significant gaps’, while border officials said they did not feel adequately prepared, saying they have had little guidance on what to do if people refuse to comply.

Parents living abroad whose unaccompanied minors travelling back to school in the UK have also pleaded with the Government to rethink hotel quarantine rules.

And families returning to live in the UK have been left exasperated by the lack of clarity around childcare.

Beckie Morris, 30, planned to repatriate to the UK from the United Arab Emirates with husband Matthew and their daughter, but they now face a quarantine bill of thousands of pounds if they do.

The new mother said there was ‘no information’ on the Government website about what to do with young children.

She said: ‘We’d have to arrange all the formula. I don’t know what we do about sterilising bottles, or nappies or washing their clothes – there’s all this unknown.

‘I tried to reach out, and I know it’s still really early days, but there’s just no information.

‘They haven’t really laid out what actually happens when you get to that hotel and I don’t think that’s going to be known until the first person goes in there.

‘People shouldn’t be used as guinea pigs – especially not paying that amount, that is an extortionate amount of money.’

The Government is already thought to have contracted 16 hotels to take part in the scheme.

But ahead of the new measures coming into force, Mr Nawab, whose London Hotel Group cares for homeless Covid-positive patients for the NHS, warned about the ventilation systems in the types of hotels the Government has chosen.

In an email sent to the Crown Commercial Service (CCS), the group which has been tasked by the Department for Health and Social Care (DHSC) to book the hotels, he set out a series of requirements for hotels needed as part of the scheme.

In the email, seen by the Sunday Telegraph, he said: ‘Hotels to be avoided where central air conditioning/ventilation systems exist, ideally individual air con units per room to heat/cool room and individual heat recovery units (HRU).

‘Alternatively if no individual air conditioning is available the window should be openable in the bedroom.’

It is not known how many of the 16 hotels the Government has chosen meet the requirements.

Though Covid is primarily transmitted between people through respiratory and contact routes, the Government has warned that airborne transmission can occur – primarily in health and care settings.

The warning came as bosses of the GMB Union, which represents hotel security and staff,  told the Observer that it had raised concerns from members about passengers being able to mix with other travellers and staff before entering the quarantine hotels.

Nadine Houghton, GMB national officer, told the paper: ‘If you’ve got people getting off planes from the red list countries, then being crammed into areas with passengers who aren’t going into quarantine – and staff as well – you’ve failed at the first hurdle.

‘Our members working at, the ground staff, security staff, have been raising concerns about this for two weeks now. Heathrow just isn’t safe at the moment.’

Speaking to the Mail on Sunday, she added: ‘Staff need thorough risk assessments, full PPE, a knowledge of the ventilation system in each hotel and a much clearer understanding of what roles security workers are expected to play.’

MailOnline has contacted the Department of Health and Social Care – who are running the scheme – for comment.

It comes as Britain’s biggest airport has warned Boris Johnson it is not ready to roll out the Government’s scheme to force travellers to quarantine in hotels from tomorrow morning.

The majority of those required to quarantine will arrive at Heathrow, but its bosses yesterday said that ‘significant gaps’ about how the scheme would operate remain.

Immigration officials also predicted long queues at the border while the Government faced accusations of failing to conduct risk assessments to ensure staff at the quarantine hotels were protected from infection.

In an effort to avert chaos, Health Secretary Matt Hancock held urgent meetings with Heathrow’s bosses but a spokesman for the airport admitted: ‘We have been working hard with the Government to try to ensure the successful implementation of the policy from Monday, but some significant gaps remain and we are yet to receive the necessary reassurances.

‘We will continue to work collaboratively with Government over the weekend but Ministers must ensure there is adequate resources and appropriate protocols in place for each step of the full end-to-end process from aircraft to hotel to avoid compromising the safety of passengers and those working at the airport.’

Airport and immigration officials are particularly worried about passengers spreading Covid-19 as they wait in queues inside the terminals and the logistics of getting them to the quarantine hotels.

The majority of those required to quarantine will arrive at Heathrow, but its bosses yesterday said that ‘significant gaps’ about how the scheme would operate remain. A plane is seen near Heathrow above the Novotel Hotel, which is participating in the scheme

Border force workers said they remained unaware of exactly what rules they will be enforcing from tomorrow after the Government pushed out the legislation late on Friday night.

Lucy Moreton, professional officer at the Immigration Services Union, which represents border staff, said: ‘We’ve got no information on what we do if someone doesn’t fill out their passenger location forms, what we do if they turn up at an airport which is not a designated airport.

‘What happens if they leg it? Are we supposed to chase?’

All arrivals from 33 ‘red list’ countries will have to quarantine in one of 5,000 Government-booked airport hotel rooms for ten days at a personal cost of £1,750 for the duration of their stay.

Some hotel firms have opted out because the Government contract states Ministers can extend the scheme on a rolling basis beyond March 31 with the daily rate capped at between £50 and £80 for a room and three meals a day. One of the hotels advertising a quarantine package is seen above

The Government has agreed deals with 16 hotels for just under 5,000 rooms until March 31, but leaked documents show they may need up to 28,000 hotel rooms to accommodate 1,425 arrivals per day.

Some hotel firms have opted out because the Government contract states Ministers can extend the scheme on a rolling basis beyond March 31 with the daily rate capped at between £50 and £80 for a room and three meals a day.

Travellers who need to quarantine have to book a hotel room through the Government’s website, which crashed last week but was running normally yesterday.

Last night, a Government spokesman said: ‘ We are working closely with airports and hotels to manage any issues that arise and ensure the new process runs as smoothly as possible, and we are clear the safety of all staff and passengers is a priority.’

Video .. A bombing aimed at demolishing a bridge in Pennsylvania