Extinction Rebellion mobs have blocked roads leading to more than a dozen Amazon fulfilment centres across the UK as they target Black Friday shoppers.

Pictures showed activists sitting in large bamboo towers outside the warehouses, preventing vans and lorries from getting in on the US giant’s busiest day of the year.

The protests started at 4am with about 20 activists gathering outside Amazon’s distribution centre in Dunfermline, which is the UK’s largest.

In Dartford – one of 13 sites targeted – protesters held a sign saying ‘Black Friday exploits people and planet’, while in Peterborough the slogan was ‘infinite growth harms planet’.

In Manchester, XR have strewn items along Sunbank Lane near Manchester Airport in order to stop traffic.

Other sites that have been blocked include ones in Doncaster, Darlington, Newcastle, Derby, Coventry, Rugeley, Bristol, Tilbury and Milton Keynes. 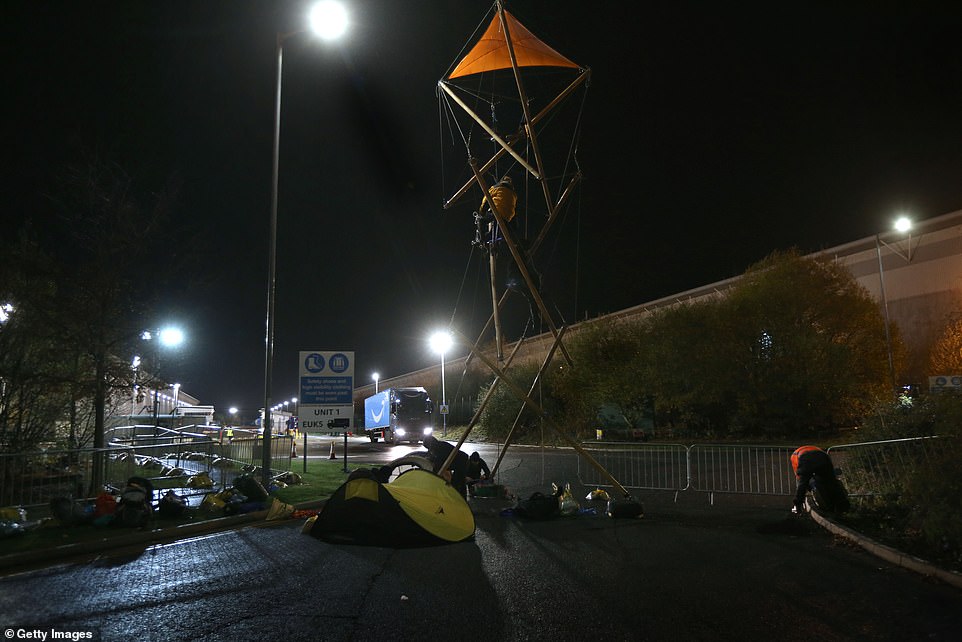 PETERBOROUGH: Extinction Rebellion activists block a street leading out of an Amazon fulfilment centre in Peterborough with bamboo structures and banners 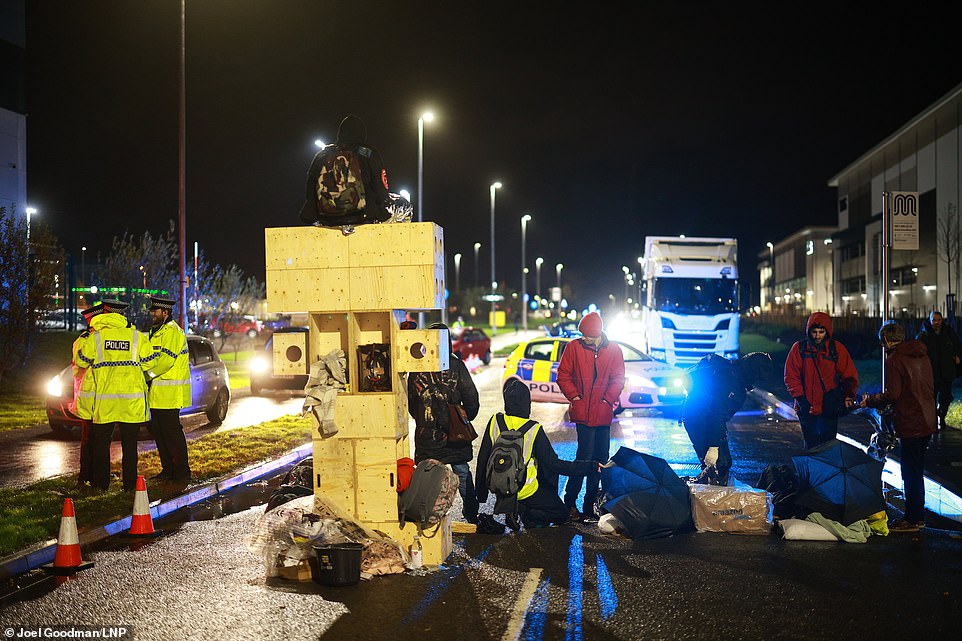 MANCHESTER: In Manchester, XR have strewn items along Sunbank Lane near Manchester Airport in order to stop traffic 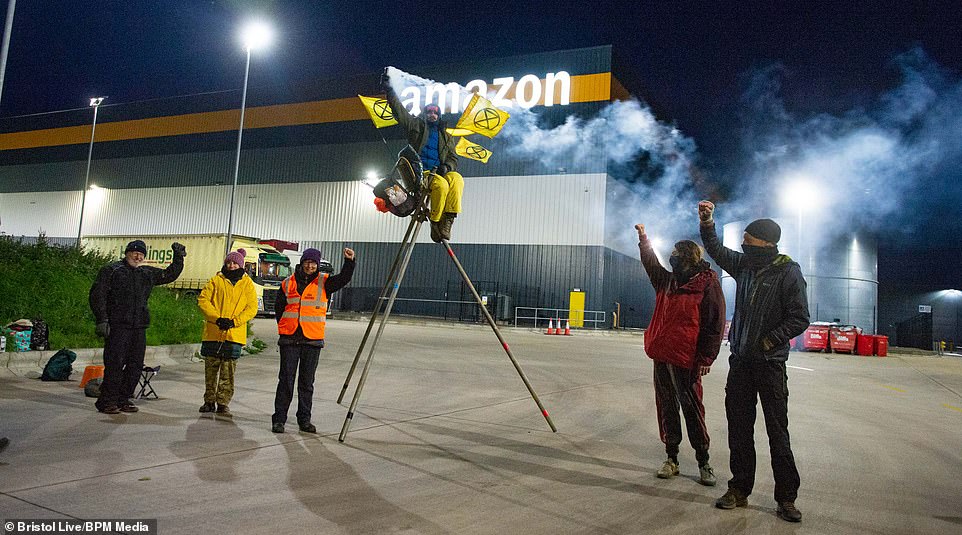 BRISTOL: Protesters arrived at the distribution centre in Avonmouth at 4am and “locked on” to bamboo towers and scaffolding structures 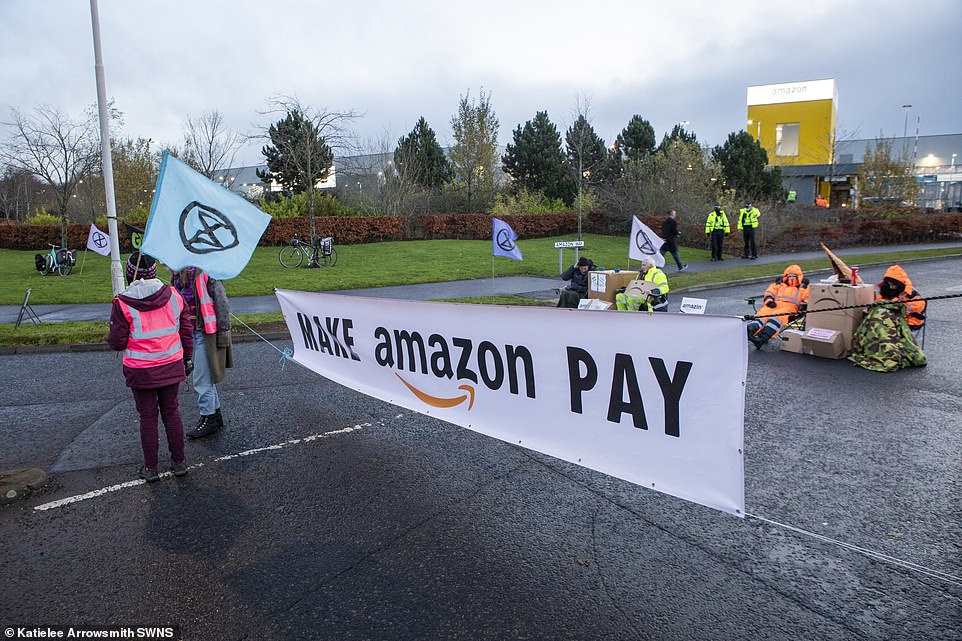 DUNFERMLINE: The protests started at 4am with about 20 activists gathering outside Amazon’s largest UK distribution centre 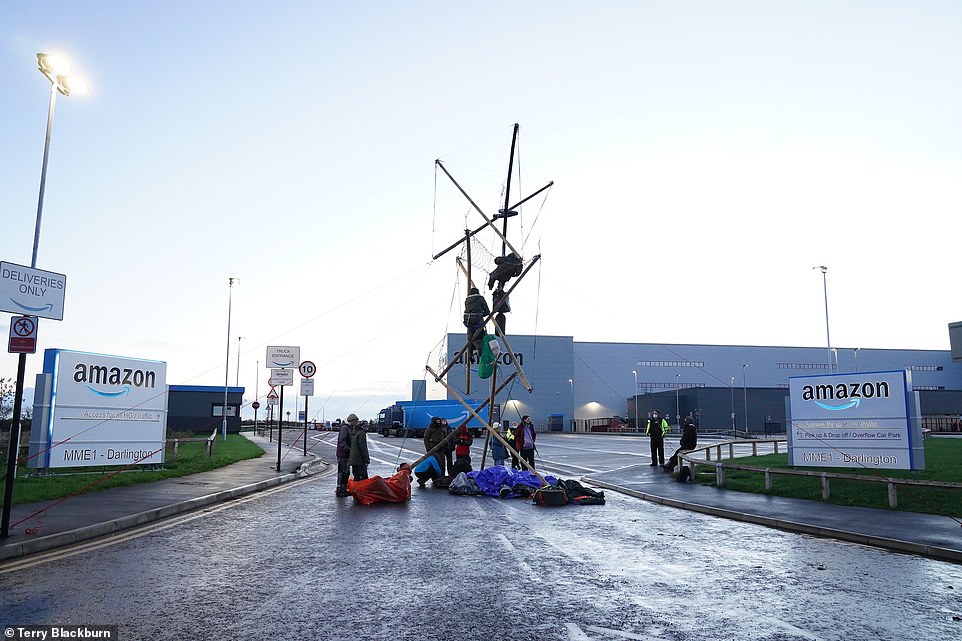 DARLINGTON: Protesters have been using bamboo frames as they take a long time for police to dismantle

Protesters with ‘lock-ons’ and placards have stopped lorries entering the Scottish site and some from leaving.

XR’s spokesperson at the Dunfermline blockade, Meg Paton-Jones, said: ‘The police have one van on site and they are watching us.

‘We started here at about 4am but are not blocking the employees’ car park so the night shift can leave.

‘We have good vibes and music.’

An XR spokesperson added: ‘The action is intended to draw attention to Amazon’s exploitative and environmentally destructive business practices, disregard for workers’ rights in the name of company profits, as well as the wastefulness of Black Friday.

‘The blockade is part of an international action by XR targeting 15 Amazon fulfilment centres in the UK, US, Germany and the Netherlands, aimed at highlighting Amazon’s ‘crimes’.

‘This is happening in solidarity with activists and workers from the global Make Amazon Pay campaign, demanding better working conditions, clear environmental commitments, and for Amazon to pay their fair share of tax.

‘Amazon continues to lobby the US government to fight against climate legislation while telling the public they are committed to green initiatives.

‘They are committing the very definition of greenwash.’

Protester Eleanor Harris, from Glasgow, said: ‘It is essential we move to a new model of economics that prioritises wellbeing and sustainability over profit.

‘The era of exploitative throw-away capitalism will soon be over, either by changing to meet the challenges we now face or by the destruction of our global habitats and societies.’ 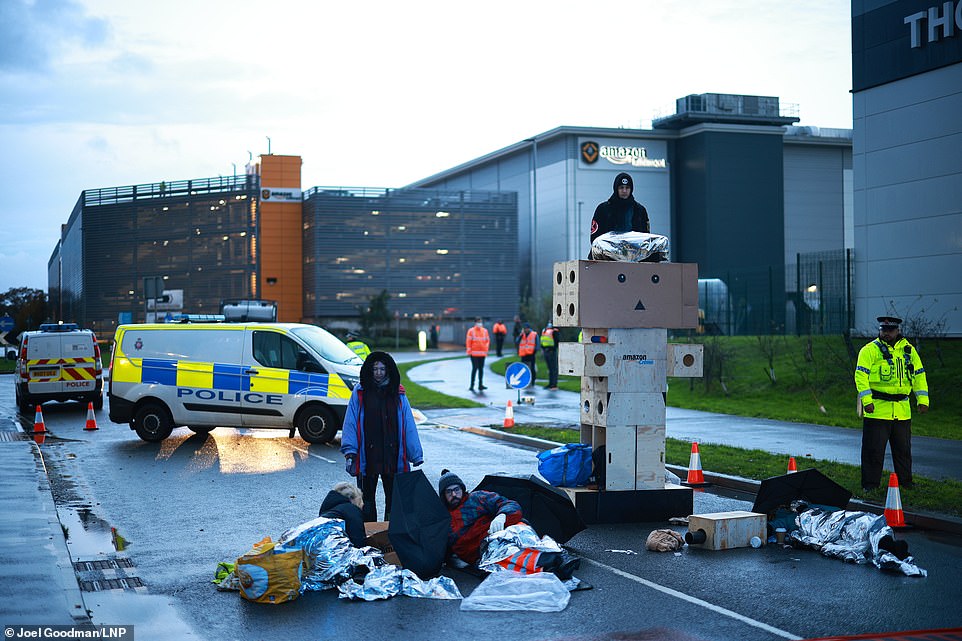 XR demonstrate outside an Amazon warehouse at Manchester Airport, blocking Sunnybank Lane, that leads to the warehouse 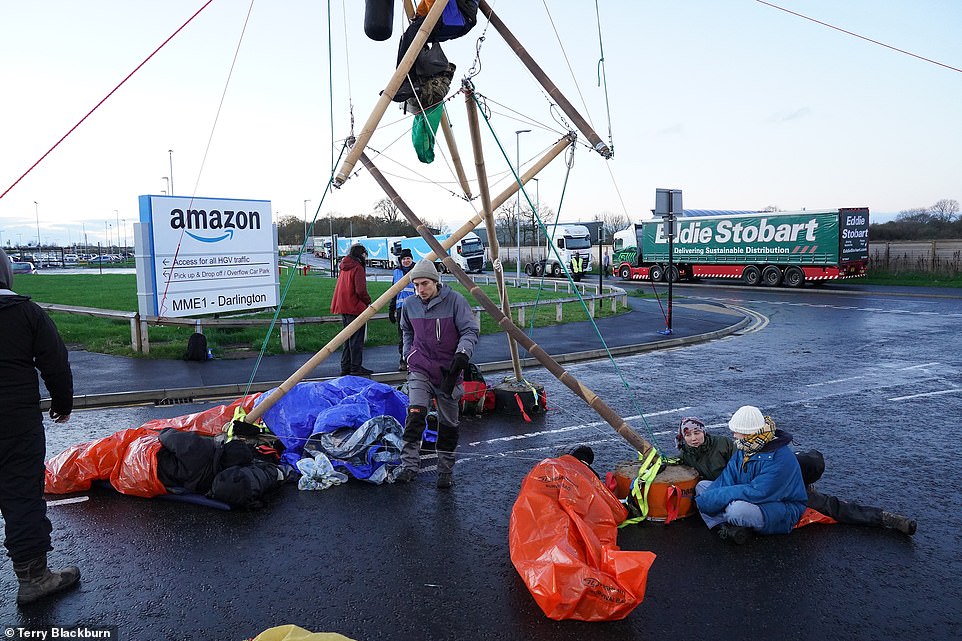 XR’s spokesperson at the Dunfermline blockade, Meg Paton-Jones, said: ‘The police have one van on site and they are watching us’ 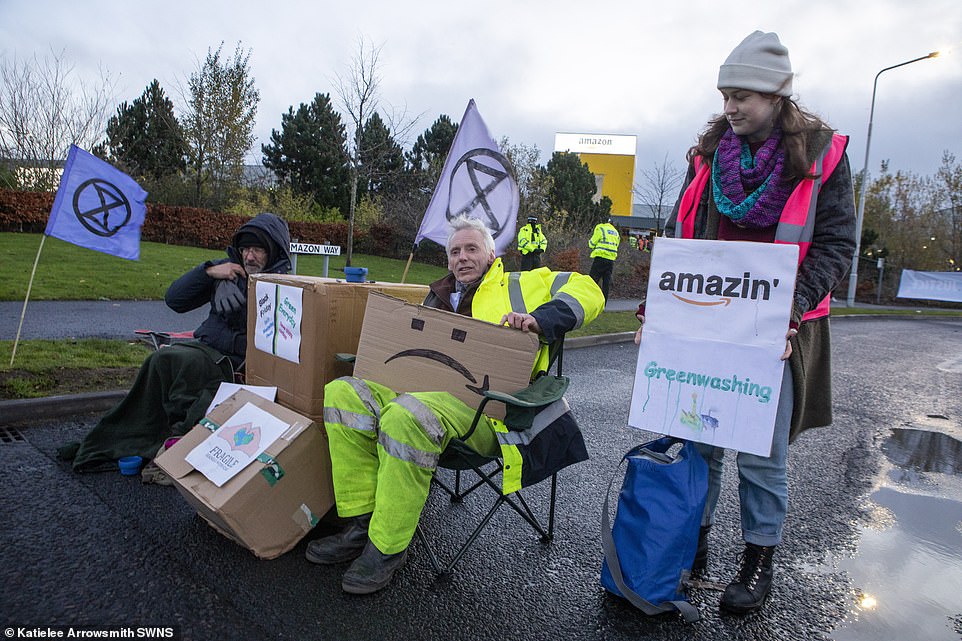 Amazon has published a commitment to reach net-zero carbon across the business by 2040, 10 years ahead of the Paris Agreement. Today – in Dunfermline – protesters accused it of ‘greenwashing’

Maciej Walczuk, a 19-year-old student, said: ‘We have to recognise that the consumption in the global north is largely based upon the exploitation of the working class and the global south, while companies like Amazon make massive profits and contribute to worsening the climate and ecological crisis.

‘We need a new system that respects people and the planet, instead of blindly chasing profit.’

XR South East UK tweeted: ‘Extinction Rebellion blockade #AMAZON fulfilment centres across the UK and Europe on #BlackFriday holding them responsible for the damage they do to #PeopleAndPlanet. #InfiniteGrowthFinitePlanet.’

But angry social media users hit out, with one tweeting: ‘Agree with saving the climate…but you need public support to get the government to care.

‘Blocking roads just annoys folk and loses you the good will from the public (especially the working ones whose taxes pay your benefits).’ 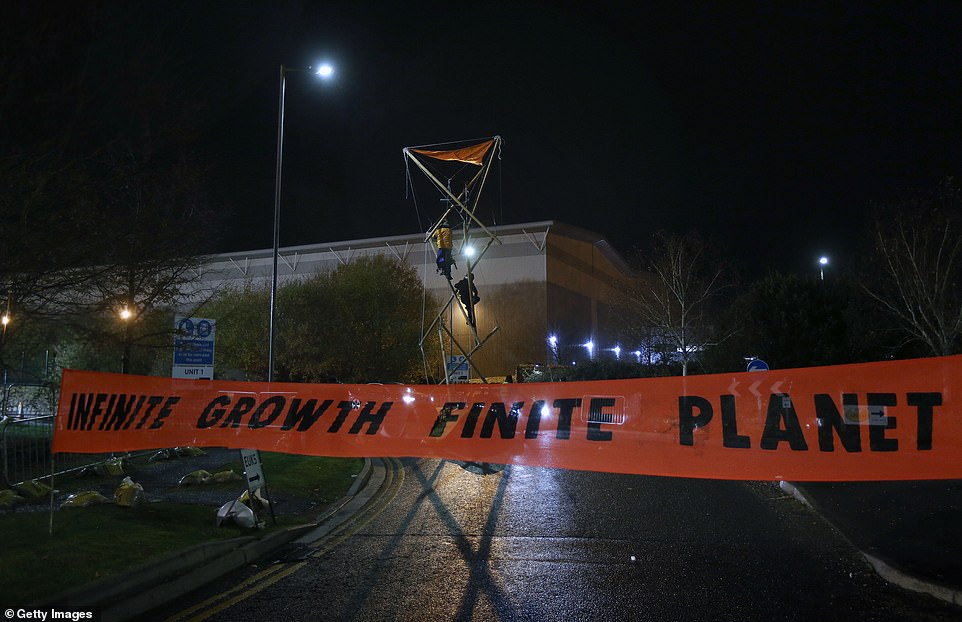 PETERBOROUGH: XR activists placed a sign along the road saying ‘infinite growth finite planet’. Protesters use bamboo structures because they take time for the police to dismantle 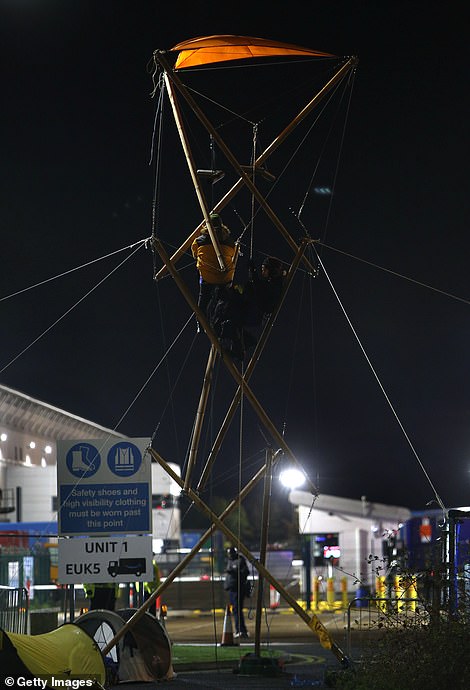 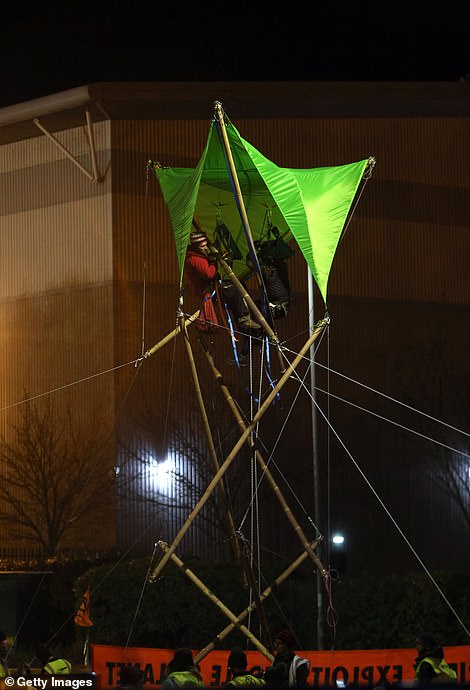 PETERBOROUGH: Each of the bamboo structures (including this one in Peterborough) had someone sitting inside. They are designed to be as difficult to dismantle as possible 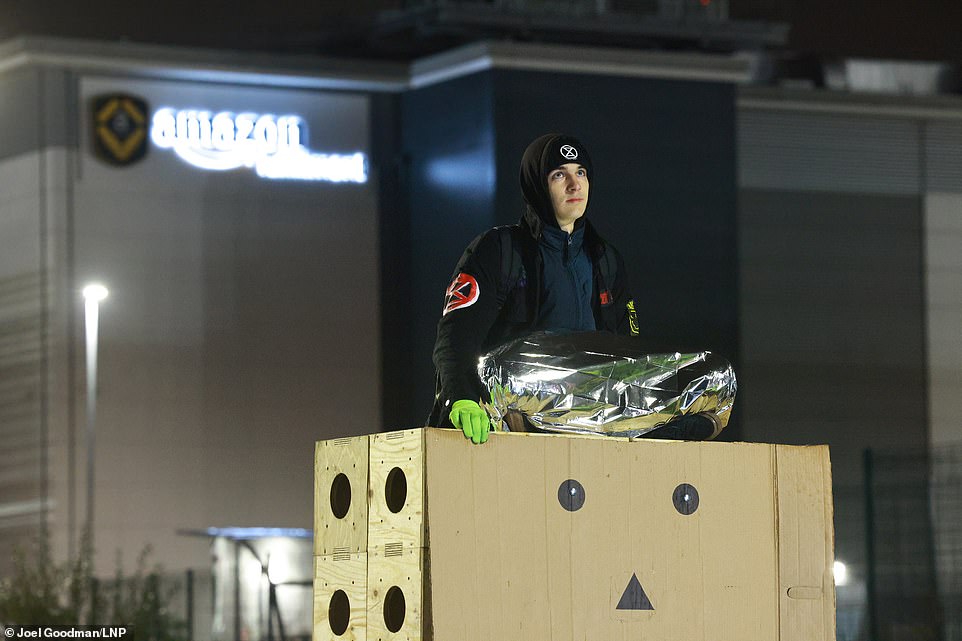 MANCHESTER: A protester sitting on top of a wooden box in front of an Amazon fulfilment centre at Manchester Airport 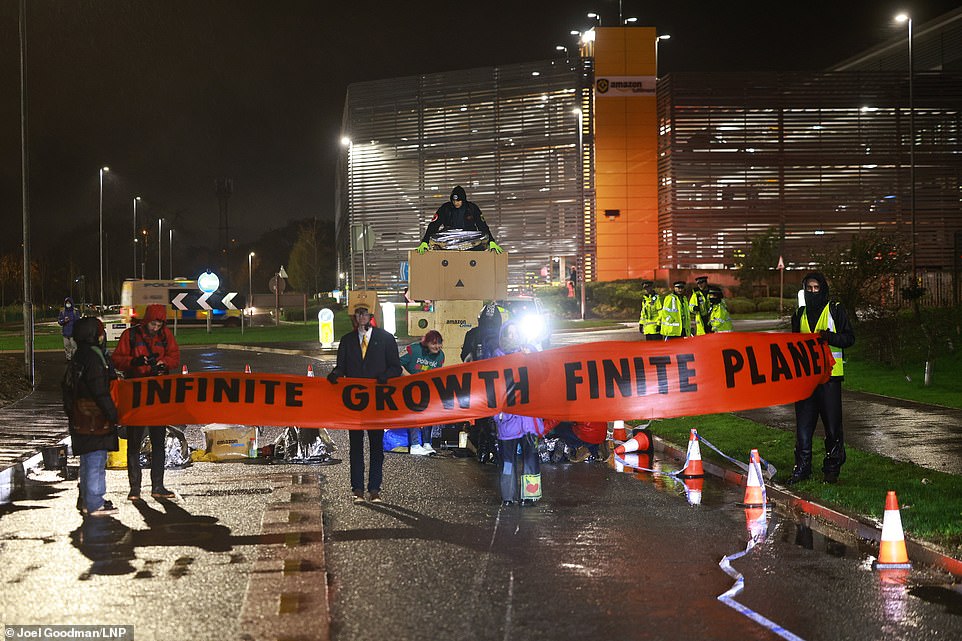 Amazon has published a commitment to reach net-zero carbon across the business by 2040, 10 years ahead of the Paris Agreement.

Earlier this month XR pledged to mobilise two million protestors to launch what it says will be ‘the largest act of civil resistance in UK history’ in April next year.

The environmental campaign group made the pledge today after criticising this month’s climate summit, claiming it did not go far enough to tackle the crisis.

The group said that the number of activists taking part in their demonstrations had dwindled during the pandemic but that they hoped to rely on record numbers in 2022.

In a video which draws on images of the Suffragettes, Ghandi and Martin Luther King, XR spokesperson Nuala Gathercole Lam calls for action and says: ‘When millions of people come together to demand change, governments have no choice but to act. 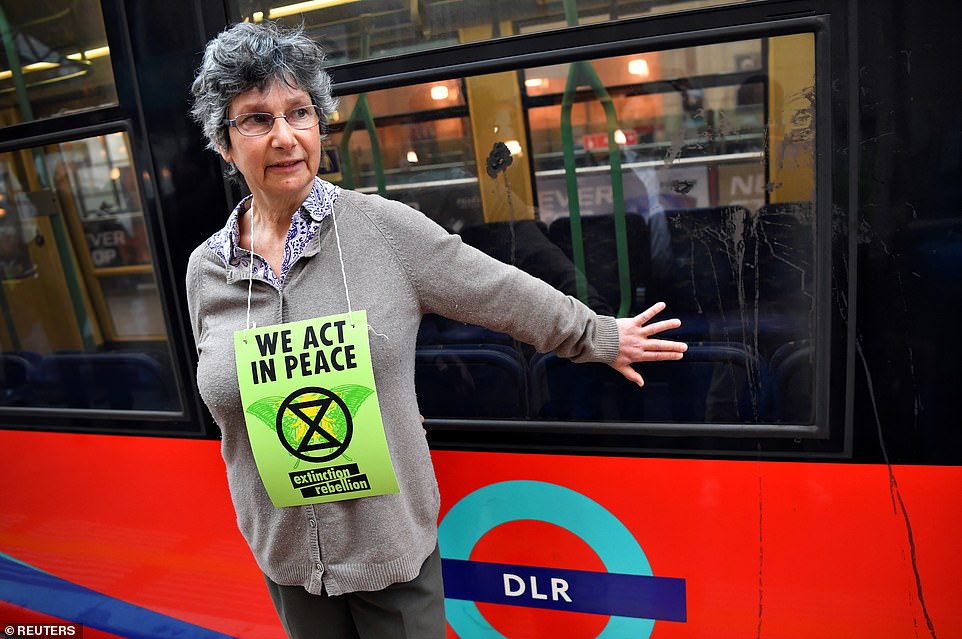 XR is vowing ‘the largest act of climate resistance’ in April next year. Pictured: Protester Diana Warner glues her hand to a train as demonstrators block traffic at Canary Wharf Station on April 25, 2019

Citing research carried out at Harvard University, XR says that movements which achieved ‘active engagement’ of at least 3.5 per cent of the population have ‘never failed to bring about significant social and political change’.

The group says that 3.5 per cent of the UK population equates to 2.3 million people and has set itself the target of recruiting those people for its campaign in 2022.

XR believes if they hit this target then their protests in April next year will be ‘the largest act of civil resistance in UK history’ as it issued an appeal for people to join its cause.

Group spokesman Nuala Gathercole Lam added: ‘While our mass participation campaigns of 2019 played a significant role in driving forward the recognition of the climate and ecological crisis, XR’s actions have not yet brought about the real action on the part of government needed to reduce emissions and restore biodiversity.

‘That’s why in 2022 we will be working to grow our numbers and developing designs for civil resistance campaigns, the first of which will take place in April 2022.

‘Our mobilisation program will continue to build numbers through the year with the aim of achieving XR’s three demands.

‘The failure of COP26, and indeed the COP process generally, is devastating but not surprising – it is clearer than ever now that it’s up to all of us.’

As well as disrupting commuters on the roads, activists caused severe delays on the transport network by gluing themselves to trains. 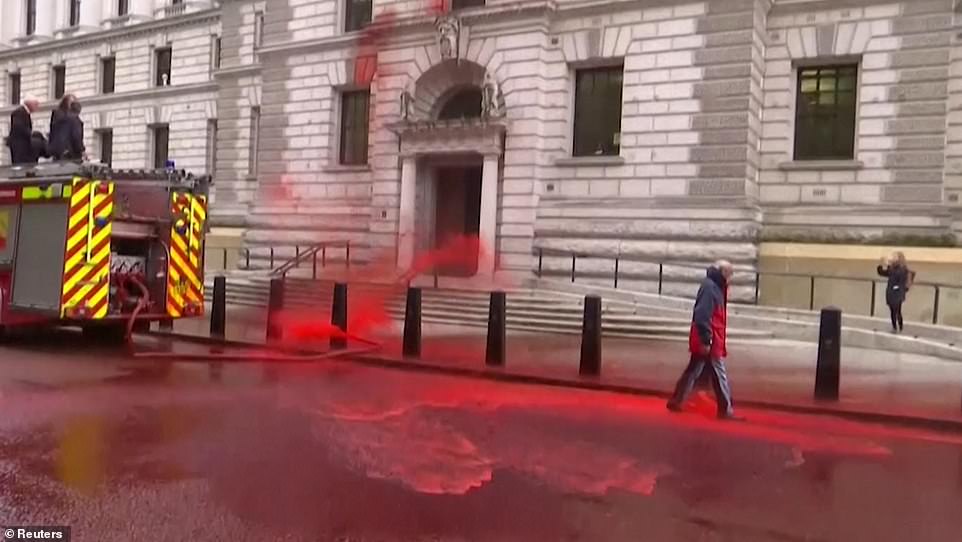 Singer Salma Sorour on her participation in the celebration of the Way of the Rams: a great honor and the event is historical