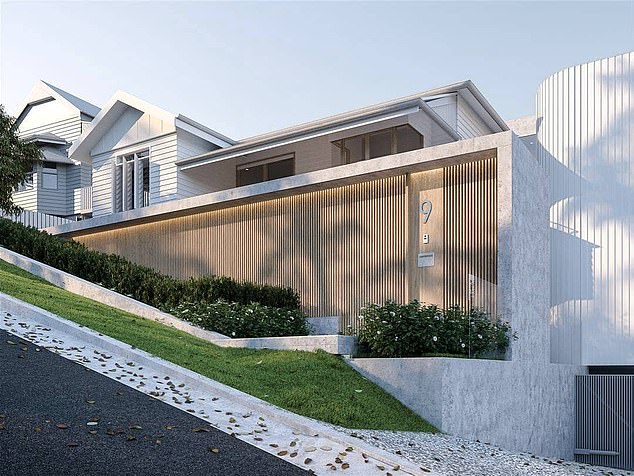 The multi-millionaire owner of a Brisbane mansion has won a court order against his neighbours, temporarily stopping construction on their dream home on one of the city’s most exclusive streets.

Steven John Baxter, founder of digital signage company Mandoe Media, successfully obtained the order against his Paddington neighbours who were building massive retaining walls against his property to support a swimming pool and outdoor entertaining area.

Homeowners Anthony Steven Preston and Kylie Anne Preston, and builder Graya Construction, were on Wednesday ordered by Planning and Environment Court Judge William Everson to suspend construction until a court hearing this week.

Pictured: Image shown to the court of the Prestons’ new home under construction in Paddington, Brisbane

Mr Baxter paid $5.35million for his six-bedroom, four-bathroom mansion in 2014.

The Prestons bought their property, which adjoins Mr Baxter’s home on a steep slope, for $3million in 2018 and demolished it to begin construction on a new home.

Lawyer David Hood filed the injunction against the Prestons and Graya of behalf of Mr Baxter, claiming his client was concerned for the safety of his property from the retaining wall, the earthworks, and the construction equipment.

In letters written to the Prestons sent before the court hearing Mr Hood demanded construction cease and claimed a truck on the site ‘slid downhill in the mud’, striking a fence and coming within half a metre of Mr Baxter’s house.

One letter from Mr Hood alleged the wall as ‘hastily constructed’, and asked for proof of insurance and a safety plan to protect Baxter’s home in event of a catastrophic situation.

The court was also provided with photographs showing the Preston home in various stages of construction, including CCTV camera images.

The case is expected to continue on Wednesday where both Mr Baxter and the Prestons are set to appear.

Barrister for Mr Baxter Andrew Skoien sought in an application to the planning court declarations that much of the construction was done without Brisbane City Council approval and was a development offence.

Mr Skoien says the Prestons only sought ‘retrospective approval’ after work was implemented to build the pool area.

The Prestons filed a retrospective development application on March 16 for the outdoor area, but they have not yet been approved, court documents show.

According to court documents, the Prestons had approval for the partial demolition of the pre-WWII home and its relocation and extension, but didn’t have approval for extensive earthworks or retaining walls, which were at the center of Baxter’s complaints.

The Prestons’ home has uninterrupted views of Brisbane’s skyline which they were looking to extend with the above-ground pool.

The retaining walls that already exist are allegedly ‘higher’ and ‘in different form’ to those shown on the approval developments, according to Mr Baxter’s lawyers, and are ‘out of keeping with the character’ of the Paddington area.

They say the retaining wall is within 2.5 metres of Mr Baxter’s property, rather than the 6.5metres specified in plans.

Mr Baxter’s lawyers said they have attempted to make contact with the Prestons on several occasions but have received no reply.

The owners of the Prestons’ rear neighbours have also submitted a complaint against the Prestons’ and Graya Construction, claiming the building was started ‘unlawfully’ and create a ‘clear impact to privacy and amenity’ of their home.

‘At this stage, we understand no engineering drawings have been provided to Council to demonstrate the design of the retaining walls including but not limited to footings, surface drainage or any subsoil drainage,’ the owners said in a planning submission to the council.

‘In the absence of detailed engineering drawings, there is insufficient material provided for Council to reasonably assess this Operational Works application and confirm the associated impacts beyond the obvious impacts to privacy and amenity.

‘The purpose of this submission is to reiterate areas of non-compliance relating to the retaining walls which in the current form will result in an extreme adverse impact on the amenity of 30 Wilden Street.’

Graya Constructions were involved in 12 different properties last year amounting for more than $20.5million worth of building costs.

An image shown to the planning court shows Mr Baxter’s home in the foreground, with the Prestons’ under-construction home in the background