Some doctors in Britain will be able to wear specialised masks with a nanocopper layer that kills the coronavirus by the end of the year.

Face masks are worn to stop coronavirus, and other pathogens, from spreading from one person to another by capturing infectious saliva droplets.

But while the standard three-layer surgical masks are effective at this, the virus can survive on its surface if not disinfected or disposed of correctly.

A scientist at Nottingham Trent University designed the mask and his company, a university spin-off called Pharm2Farm, is now manufacturing them.

Dr Gareth Cave, a nanotecnology expert, says the first masks will be produced later this month before being commercially available in December.

As well as being Type IIR certified – the gold standard for masks ensuring they filter out 99.98 per cent of particles – the material kills 90 per cent of coronavirus particles in less than an hour. 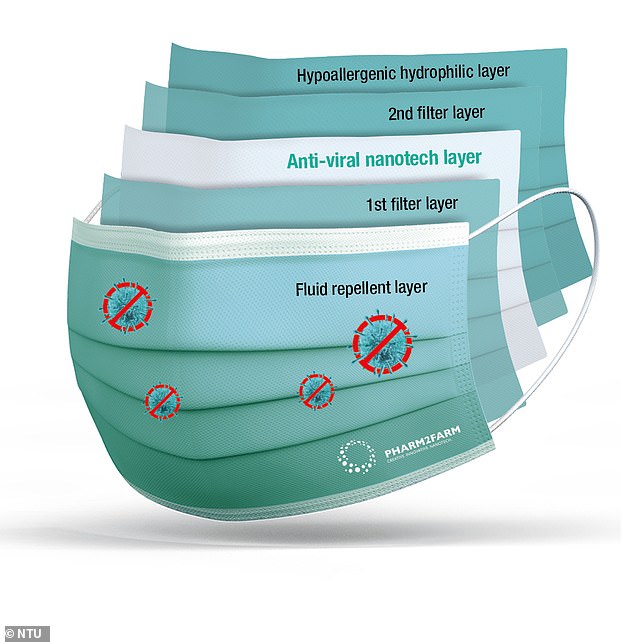 A scientist at Nottingham Trent University designed the mask and his company, a university spin-off called Pharm2Farm, is now in the process of commercialising the five-layer mask 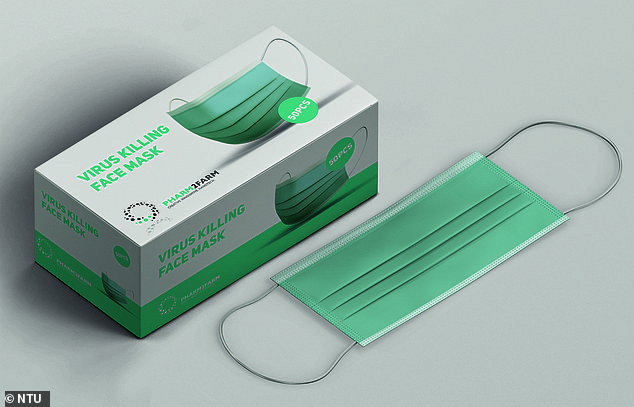 Dr Gareth Cave, a nanotecnology expert, says the first masks will be produced later this month before being commercially available in December

Copper has long been heralded for its anti-viral properties, with experts calling for it to be used on shopping trolleys and door knobs to halt transmission.

Dr Felicity de Cogan of the University of Birmingham said in June that copper has shown promise when it comes to killing the virus, meaning that people who touch these surfaces are unlikely to pick it up on their hands.

She says studies have found that even non-engineered metal is 99 per cent effective at killing the virus after 2-6 hours.

It is well known that copper has inherent antimicrobial properties, but Dr de Cogan said the time-frame that it does this in is insufficient at preventing the spread of coronavirus in the community.

Nottingham’s Dr Cave used his expertise with nanotechnology to supercharge the antiviral properties of copper. 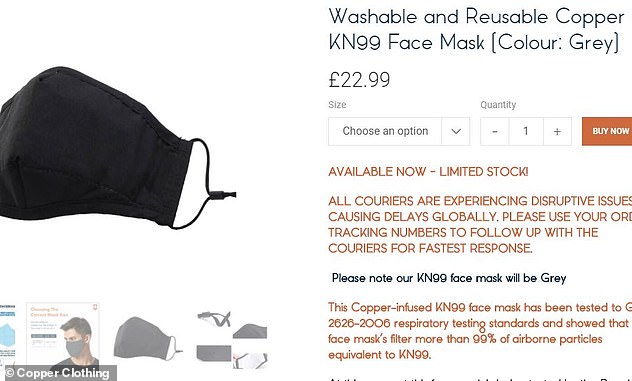 A British company called Copper Clothing, which is selling a ‘Washable and Reusable Copper Infused KN99 Face Mask’ for £29.99 (pictured), claims it has the technology to potentially destroy the virus on a surface almost instantly

He created a layer of copper nanoparticles which is sandwiched between two filter layers and two water-resistant sheets.

A patented process means copper ions are released if it comes into contact with the coronavirus.

‘It’s exciting to see our technology move forward and make a real impact towards the fight against the spread of COVID-19,’ said Dr Cave.

‘The mask we’ve developed has been proven to inactivate viruses upon contact; the antiviral layer kills virus which has been blocked by the filter layers.

‘The challenge with conventional surgical-type masks is that they only block virus from entering or exiting the mask.

‘They don’t have an active mechanism for killing it once it’s trapped in the mask.

‘Our new antiviral mask has been designed to utilise the existing barrier technology and combine it with our nanotechnology to kill the virus once it is trapped there.

‘We’ve added the barrier layer to both sides of the mask so not only does it protect the wearer but also those around.

‘By killing the virus on contact, it also means that the used face mask can be safely disposed of and not be a potential source of passive transfer.’ 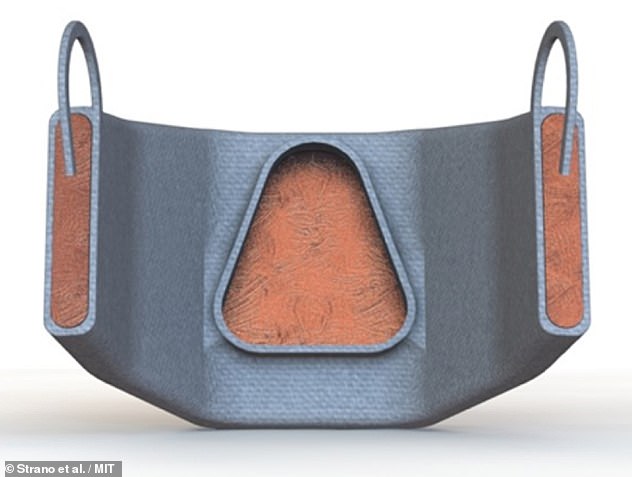 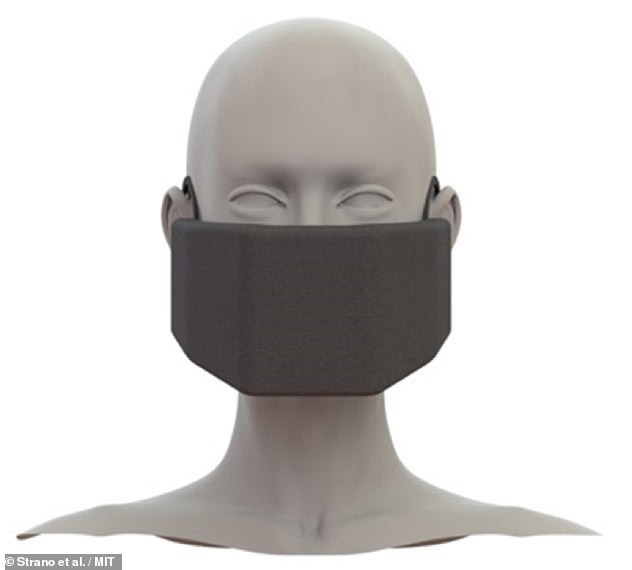 If commercialised, the MIT battery-powered device (pictured) would likely be more expensive than a cloth mask, surgical mask or an N95 respirator, the researchers said

The mask is not the first one to make use of specialised copper layers to prevent the spread of Covid-19, but it is among the first to use it alongside Type IIR standards.

A British company called Copper Clothing, which is selling a ‘Washable and Reusable Copper Infused KN99 Face Mask’ for £29.99,.

Rory Donnelly, head of research and development at Copper Clothing, told MailOnline the firm has engineered copper to destroy SARS-CoV-2.

MIT researchers also recently unveiled a concept for a battery-powered face mask with a copper mesh that is heated to 194°F (90°C).

If commercialised, the battery-powered device would likely be more expensive than a cloth mask, surgical mask or an N95 respirator, the researchers said.

However, the heated mask would be ideal for situations where risk of viral exposure was high — such as in a healthcare setting, or on crowded public transport.

Furthermore, it would not need to be disposed of or sterilised after being used.

The MIT researchers are not the only ones applying copper in the fight against the novel coronavirus.

Masks and gloves made by Caterham-based Copper Clothing have been demonstrated in lab tests to kill 99.99 percent of viral particles of SARS-CoV-2 that land on their surface within 30 minutes.

The items work by harnessing the biocidal impact of copper ions on the viral cells — a phenomena that experts refer to as the ‘oligodynamic effect’. 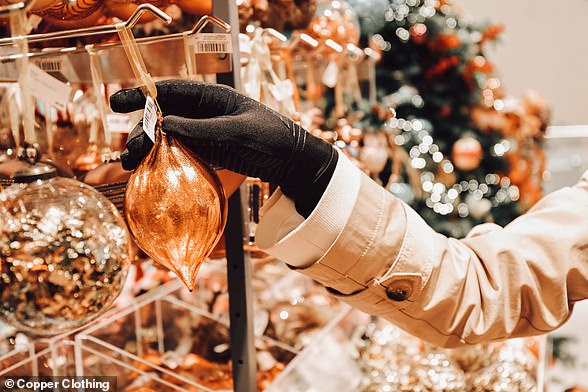 ‘Copper has always been a strong material to explore when it comes to preventing the spread of infections because it has oligodynamic properties,’ said consultant obstetrician Abdul Sultan of the Croydon University Hospital.

‘It’s great to see organisations coming together to bring innovative solutions like this to fight against bacteria, fungi and viruses for the future,’ he added.

The United States thanks Algeria again for its “unforgettable beautiful”

Price: (as of - Details) Help your young lady to get her skills to the...