A Falklands War hero who machine-gunned five enemy soldiers to save his comrades during the Battle of Goose Green is selling his medals for £120,000 to help fund his retirement.

Sergeant John Meredith, who served with the Parachute Regiment, showed ‘outstanding gallantry and leadership’ in saving five colleagues during the Battle of Goose Green, for which he was awarded the Distinguished Conduct Medal.

The paratrooper single-handedly charged at the enemy while under heavy fire after he saw his platoon leader killed moments earlier.

Lieutenant Jim Barry was about to take the surrender of a group of Argentine soldiers when they were mistakenly shot at, prompting them to return fire at close range.

Sgt Maj Meredith, who took command of the platoon, rushed forwards with a machine gun and took out five of the enemy.

The brave act enabled five of his own party, who had been trapped in a perilous position and were about to be ‘wiped out’, to get to safety. 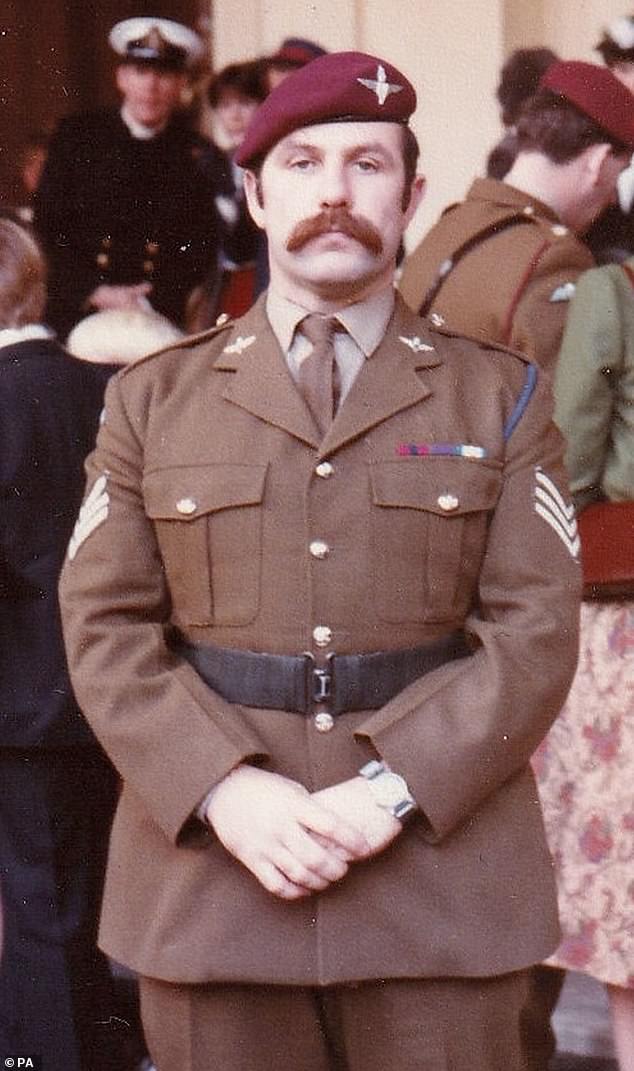 Sergeant John Meredith showed ‘outstanding gallantry and leadership’ in saving five colleagues during the Battle of Goose Green, for which he was awarded the Distinguished Conduct Medal 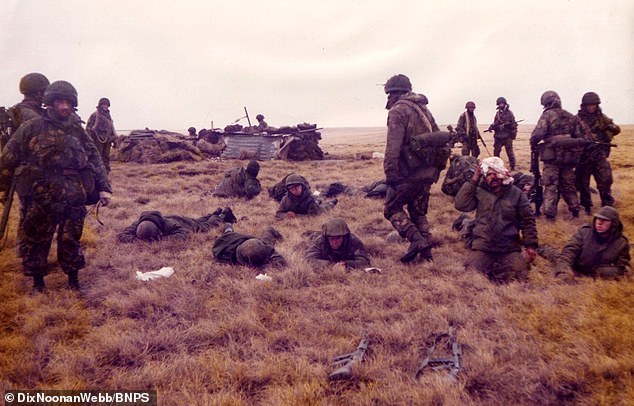 Pictured: Troops in the Falklands War. Later in the campaign, Sgt Maj Meredith also showed great courage during an attack at Wireless Ridge

Later in the campaign Sgt Maj Meredith again showed great courage during an attack at Wireless Ridge where he assisted his commanding officer in leading his men forward in the face of heavy machine gun and artillery fire.

He was awarded the prestigious Distinguished Conduct Medal for his bravery at Goose Green.

His citation read: ‘He was a dedicated and devoted leader, encouraging and steadying the younger soldiers under fire and inspiring the platoon by his personal example.

‘There is no doubt that these five men owe their lives to Sergeant Meredith’s prompt and gallant action.’

Major Philip Neame’s account of the action at Goose Green was published in the book Above All Courage, and he describes Mr Meredith as ‘hard as nails’.

‘Meredith, of course, held it all together and made sure the platoon continued to work together – a really solid number, hard as nails and with the ability to think,’ he said.

‘He never appeared fussed, which is what I think really helped at this time, at least for his blokes.’

Now aged 70, Sgt Maj Meredith has decided to sell his medals to secure his financial future.

They are going under the hammer with London auctioneers Dix Noonan Webb.

Being sold with them are letters and telegrams of congratulations to him on the award of his DCM, including those from Prince Charles, various photographs taken in the Falklands and of Maj Meredith outside Buckingham Palace at his investiture.

The sale takes place on December 3.

Christopher Mellor-Hill, associate director of Dix Noonan Webb, said: ‘We are very pleased to be offering this group on behalf of Major Meredith, who played a vital part in the action at Goose Green – a pivotal event in the Falklands War. 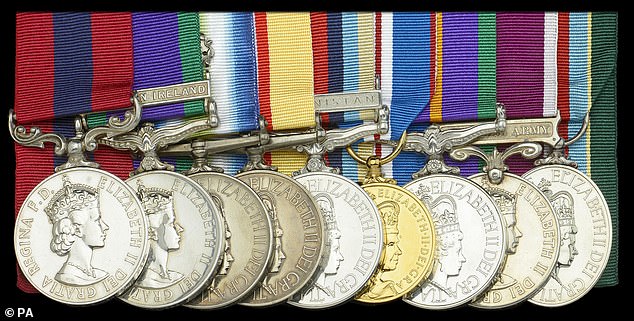 ‘Only eight Distinguished Conduct Medals were awarded during the South Atlantic Conflict.’

The citation for the Distinguished Conduct Medal reads: ‘With conspicuous gallantry and presence of mind, Meredith rapidly assumed command of the platoon, organised covering fire for the trapped men and stabilised the situation.

‘He then personally took a machine gun and moved forward under heavy enemy fire to where he could neutralise the remainder of the enemy and give directions to extricate the trapped men.

A heroic charge against all the odds: How the Battle of Goose Green was won

Goose Green was a landmark battle between British and Argentine forces during the Falklands War in May 1982.

It was also highly controversial, as the BBC had announced live on air that the battle was to take place, with many critics saying this endangered the lives of British soldiers and personnel.

The 14 hour struggle was the first land battle between the opposing forces.

The British forces appeared to be outgunned and out-manned by an Argentine army that was double their size.

There were also tough weather conditions on the rocky island outcrops that made the fighting even more difficult.

But on May 28 they succeeded in capturing the Argentine forces, after the brave soldiers advanced on the troops.

The battalion also lost their commander Jones when he was shot as he stormed an enemy machine-gun post.

The Argentinians agreed a ceasefire and surrendered the following morning.

Some historians argue the battle set a precedent for the rest of the war, and set the tone for the military engagements that followed.

This included the advance on Stanley, the capital of the Falklands.

‘There is no doubt that these five men owe their lives to Meredith’s prompt and gallant action.

‘Subsequently the platoon under his direction captured the enemy position.’

Sgt Maj Meredith, from Bangor, north Wales, and joined the British Army in 1967 and served with D Company, 2nd Battalion in the Parachute Regiment.

During the Battle of Goose Green Maj Meredith cleared a series of Argentine trenches to enable to British assault on the enemy garrison at Boca House.

Lt Col Jones, who led the 450 paratroopers, was posthumously awarded the Victoria Cross after he was killed while charging at an enemy position after his men had been pinned down.

He said: ‘Suddenly, a burst of fire, probably from someone who wasn’t aware that a surrender was taking place, came whistling over the top.

‘The Argentinians who’d been sitting there reacted immediately by picking up their weapons and firing. Mr Barry was killed instantly.

‘I saw some of my lads hit the deck because of the volume of fire that was coming our way, but I got a grip on them, got them up and firing.

‘I was covering a lot of ground, but that’s my job, that’s what I’m paid for.

‘I got across another section and picked up a machine gun and knocked off three Argies with a couple of bursts each.

D Company Commander, Major Phillip Neame, added: ‘Just as we were about to assault the school, I got news that Jim Barry, the other platoon Commander, had been shot when he had gone up to take a surrender under a white flag.

‘He and half the section had been shot down. It was such a tragic waste of life.

‘I went back to join 12 Platoon to find that Sergeant Meredith by this stage had got the situation firmly under control.

‘His platoon was busily knocking shit out of the Flagpole Position with 66 rocket launchers and machine guns.’

Hundreds of Argentinians surrendered at the Goose Green airfield after 36 hours of fighting on May 28-29, 1982.

Sgt Maj Meredith did several tours in Northern Ireland in the 1970s and after the Falklands War he was a staff instructor until 1990.

The following year, he joined the Territorial Army. He assisted the 16 Air Assault Brigade on operations to Kosovo, Macedonia, Sierra Leone and Afghanistan.

Sgt Maj Meredith joined 3 Para and served on Operation Telic in Iraq in 2004 and Operation Herrick in Afghanistan in 2008 before retiring aged 60 in 2010.

America’s oldest juvenile lifer, 83, who was jailed for murder aged 15 is freed after 68 years