FALSE claims by paedophile hunters drove me to Beachy Head

An innocent man has revealed how his life fell apart and he experienced suicidal thoughts after being accused of being a paedophile by a Facebook ‘hunting’ gang.

Darrell Edmondson, who has since been exonerated, was confronted by a group in July who broadcast the two-and-a-half-hour encounter live on the internet.

The 49-year-old, from Tunbridge Wells, was arrested by Kent Police before authorities launched an investigation.

It has since concluded he was innocent and police will not be taking any further action against him.

But Mr Edmondson said his life had already been torn apart after losing his job, friends and reputation as a result of the baseless accusations. Darrell Edmondson (above, who did not want his face pictured), who has since been exonerated, was confronted by a group in July who broadcast the two-and-a-half-hour encounter live on the internet

Mr Edmondson, in an interview with the Kent and Sussex Courier, painstakingly explained the events which led to him being caught up in a ‘nightmare’ which saw him drive to Beachy Head with a plan to take his own life.

‘It’s one of the most stressful, painful things,’ he said. ‘I can’t put it into words. You know how old people can’t talk about the war because it’s too horrific? That’s how I felt about this. This is the first time I have talked about it.’

Mr Edmondson, who did not want his face pictured, said that prior to the confrontation he had joined two dating sites.

He said a woman had originally messaged him ‘out of the blue’ and they had texted each other in July.

At one point she had told him that she would not be in touch for a while as colleagues were ‘losing their jobs’ but she started messaging again on July 31 about meeting up that night – the day of the sting.

Mr Edmondson agreed despite saying that he was reluctant because he was still in his work clothes.

‘The woman I had gone to meet that evening had asked me to be outside a pub at 7pm in Maidstone,’ he recalled.

‘I had been working all day, it was the hottest day in July, I was in my work clothes and I didn’t really want to. I tried to put it off to the next day. But she said she had got her mum to look after her daughter.’ 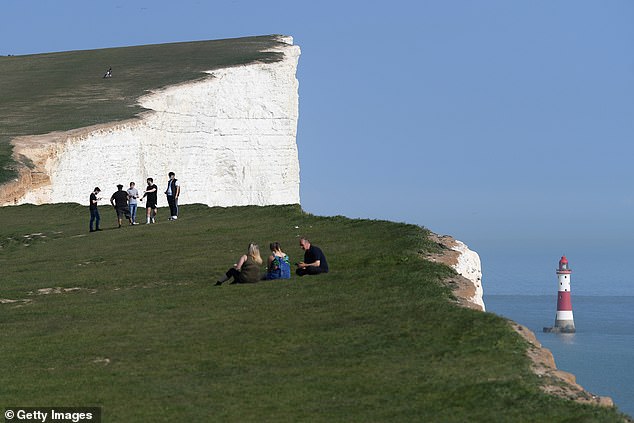 ‘I had been charging my phone at work in the office and left it. Someone said you’d better check your phone, it’s been going non-stop.

‘There were six or seven missed phone calls. Loads of texts. They were about wanting to meet that night.

‘I thought I was meeting a woman. Why would a child talk about having colleagues laid off from work and her mum going to look after her daughter?’ he said.

‘Once she sent me a picture of her in lingerie – the top half. I only used a basic phone, so the quality was not that great. She texted me first. I never sent any pictures.

‘I never phoned her. I never asked to meet. To be honest, I wasn’t that bothered. When I get my phone back, I can show you the texts from her which were piling up.’

But Mr Edmondson said that when he arrived at the meeting point he was instead confronted by members of a ‘paedophile hunting’ gang. He said: ‘When they frog-marched me to the van, there were about six or eight of them in a semi-circle, one woman, and I recognised her as the woman in that picture,’ said Mr Edmonton, who said he never sent sexual-type messages.

Mr Edmondson said he felt ‘relief’ when the police arrived after a two-and-a-half hours’ ‘interrogation’ at the back of the group’s vehicle.

He was arrested and Kent Police confiscated Mr Edmondson’s mobile phone and two tablets for investigation.

No action was taken against him by Kent Police and he was given a ‘refuse to charge’ sheet on March 24 this year which he now always carries with him.

Vigilantes use violence and blackmail, police warn, but their evidence is used in over HALF of prosecutions

Police have previously expressed concerns about online paedophile hunters after prosecutions relying on evidence from vigilante groups soared to four a week.

Senior police officers have often criticised groups who pretend to be children online in a bid to snare child sex abusers.

They have even suggested they can go beyond the law and could be guilty of crimes such as blackmail, extortion and varying forms of violence.

Freedom of Information data revealed the numbers of people convicted of child grooming offences increased five-fold between 2013 and 2018 from just 68 to 359.

Figures also show that more than half of those prosecutions relied on evidence gathered by online paedophile hunters.

According to the BBC, of the 403 people prosecuted for attempting to meet up with a child following sexual grooming in 2018 – 250 cases used hunters’ evidence.

Children’s charities have also expressed concern they are not mindful of children’s safeguarding when they carry out their stings – often streamed live on social networking sites such as Facebook.

In some cases, the vigilantes have themselves been exposed as predators.

Last year Paul Tong, from Bolton, was jailed after being trapped in a sting operation having sent explicit pictures and messages to an investigator posing as a 13-year-old called ‘Gracie’.

Mr Edmondson has been in communication with Tunbridge Wells MP Greg Clark and Facebook about the vigilante group which broadcasts its stings live via its Facebook page.

But he has also raised the malicious use of profile photos and other details which are taken by others with devastating effects.

The former van driver said that, three days after the livestream, he lost his job of 17 years in Tunbridge Wells.

He has been shunned by friends and family members as well as being shouted at in the street.

Mr Edmondson said the gang had a large A4 ring binder file full of photocopies of messages between a girl and another which had his profile picture.

‘The file they showed me, I knew nothing about them. It had been going on for months. It was not me. I had never seen that person.

‘It was not until that night when I opened the file, that I saw the girl’s picture for the first time,’ he said.

Before the incident, Mr Edmondson has worked as a van driver at the same firm for 17 years and before that for 13 years at the same company, driving across the south east surrounded by longstanding colleagues.

But, having lost his job, he is now living on benefits and does not know what the future holds.

He said: ‘I’m now totally isolated. I am picking up the pieces but it’s basically stolen my life.’

Mr Edmondson believes he was targeted because someone had stolen his personal details and photograph from social media.

He told the Courier he had asked the woman when she first messaged him, on which of the two dating sites she had found his number, as he wanted to check if he had in fact put his number.

She eventually answered the question, sending him the name of a site he did not recognise.

He said he entered the name of the site, which has no implications in the words it could be related to child abuse, into Google but a plain-looking page came up with no photos and a simple sign-in section.

But he said he ‘just had a sense’ not to proceed and never entered the site.

‘I just thought, this is as far as I want to go. This is not a dating site. And if it is, I am already on two, I don’t need another. It just doesn’t feel right.

‘I remember later when I was sitting in the cell and I sat and thought about it all night, it just felt like a set up.’

Police have since warned people not to take law into their own hands.

‘The force has specialist detectives working in the Paedophile Online Investigation Team who are trained to work in this field and have the skills and resources needed to carry out investigations in the most appropriate way. In 2020 they arrested 225 people.

‘We understand that crimes involving children and sexual offences are very emotive but I would urge those who have information about alleged offences to contact us and not take the law into their own hands.

‘Some people within online child activist groups are taking risks they do not understand – revealing the identity of suspected paedophiles can give them the opportunity to destroy evidence before we can investigate.

‘Their actions could also jeopardise ongoing police investigations or work being carried out by undercover officers and put children at risk as groups have no way of safeguarding child victims.

‘Furthermore the actions of the groups can create the need to divert significant resources towards protecting suspects, rather than investigating, and prosecuting them.

‘It is also worth noting that they could wrongly accuse someone which can have a devastating impact on innocent people and their families.

‘Finally, some of the people targeted by online child activist groups have had severe learning difficulties and other mental health issues and have been placed at significant risk.

‘In terms of actual investigations, when dealing with these groups, the quality of evidence often makes it difficult for police to carry out their duties.

‘Groups can fail to provide devices for download and do not capture evidence in the correct manner, which can undermine prosecutions.

‘We have established reporting processes, such as calling 101 or 999, to raise concerns about a child being groomed, meaning there is no requirement to carry out a ‘sting’ and I would urge people to follow this process and work with us to protect vulnerable people.’

Building Self Confidence And Unshakeable Self Worth Reviews 2021