The family of a Covid-infected man from Melbourne who visited several NSW holiday towns while unknowingly infectious have also tested positive.

The man, his wife and two children are three of Victoria’s six new locally acquired infections recorded on Wednesday.

So far, 243 people have been contacted by NSW Health and ordered into isolation after coming into contact with the infected family.

The family travelled from Melbourne across the NSW border to Jervis Bay, Hyams Beach, Vincentia and Goulburn while potentially infectious on May 23 and 24, before the city’s outbreak began.

The father suffered some symptoms on May 25, after driving back to Melbourne on May 24, and tested positive on Monday, May 31 – almost a week later.

Trappers Bakery in Goulburn, one of the busiest pit stops in NSW, has been closed for cleaning today after the man visited on May 24.

South Coast MP Shelley Hancock says the highly contagious nature of the variant is ‘super alarming’ and is urging locals to ‘please get tested and then isolate at home’ and get vaccinated as soon as possible.

‘We’re not used to being on high alert on the (NSW) South Coast,’ she told Sydney radio 2GB on Wednesday. 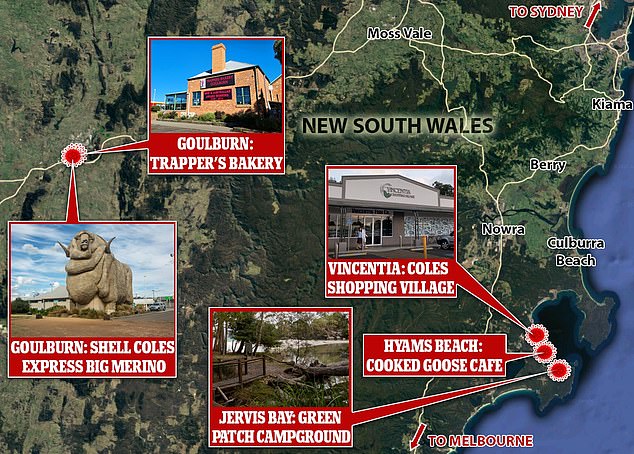 The confirmed case was in Jervis Bay, Goulburn, Hyams Beach and Vincentia while potentially infectious on May 23 and 24 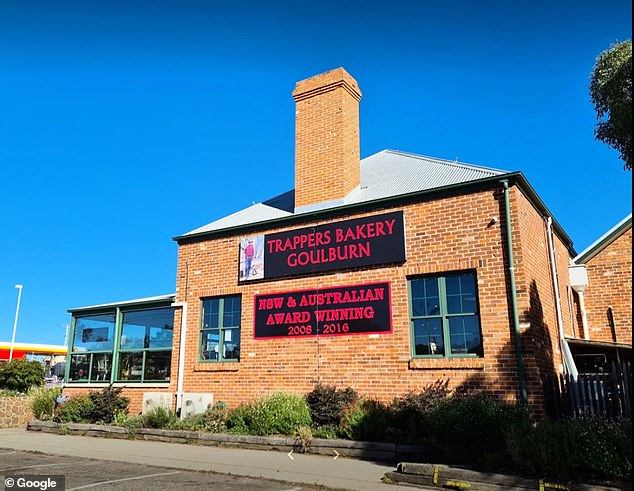 Anyone who visited Trapper’s Bakery (pictured) on Monday May 24 between 10:30am-11.30am is urged to self-isolate and get tested immediately 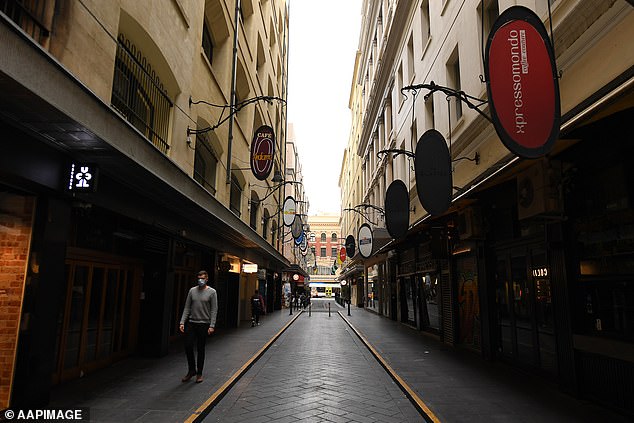 Victoria’s snap seven day stay-at-home orders could be extended for another two weeks, as Dan Andrews’ cabinet debates whether to keep the state on lockdown until after the June 14 long weekend

She’s concerned about the impact of an outbreak on the area’s elderly population.

NSW Health has now issued a list of venues of concern around Jervis Bay and is urging anyone who visited them at the times listed on the department’s website to get in contact, to get tested and to isolate until they receive further instructions.

The venues include the Green Patch campground and Booderee National Park at Jervis Bay, popular for walkers and daytrippers.

The Cooked Goose Cafe at Hyams Beach has also been exposed, as has Coles Vincentia Shopping Village and and Shell Coles Express Big Merino at Goulburn.

Anyone who lives in Jervis Bay or has visited Jervis Bay since May 22 is asked to get tested and to isolate if they have even the mildest of cold-like symptoms.

If you were at any of the following venues of concern at the times listed, please immediately call the NSW Health contact tracing team on 1800 943 553, get tested and isolate until you receive further information from NSW Health.

Victorians are bracing themselves for an extended lockdown amid mounting pressure on the NSW government to close its border.

Yet another aged-care facility was forced into quarantine on Wednesday as the cluster swelled to 60 cases.

Sources told The Australian that one possibility Victorian government officials are floating is extending the lockdown for two weeks to include the Queen’s Birthday long weekend from June 12 to 14.

Pressure is now mounting on Gladys Berejiklian to toughen restrictions as fears of another NSW outbreak grows.

The premier has been reticent to introduce border closures or lockdowns similar restrictions to Victoria and other states, but some on social media are calling for the state to lock out Victorians.

‘Gladys stated she didn’t need to close the border to Victoria while every other state and territory did. So here we are,’ one Twitter user posted.

‘This is the highly contagious Indian variant. Will she act promptly or will she let it run wild because it will.’

Another wrote: ‘If this spreads in NSW will it be Gladys’ stuff up? Will she get the blame?’

‘This is exactly why you’re and idiot for not closing the NSW border!’ a third wrote.

‘Why are you intent on not protecting your residents? Are you only going to learn once NSW has a massive outbreak like VIC?’ 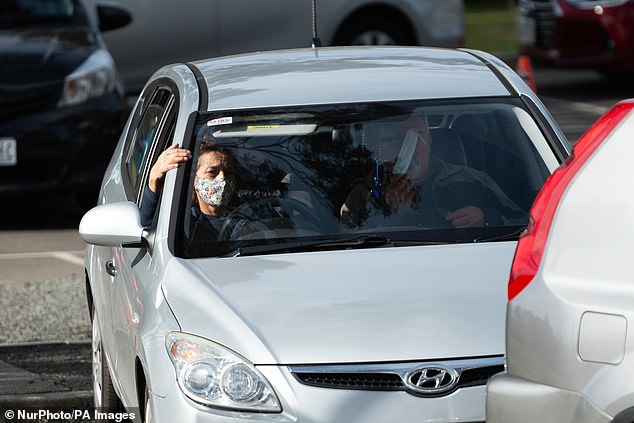 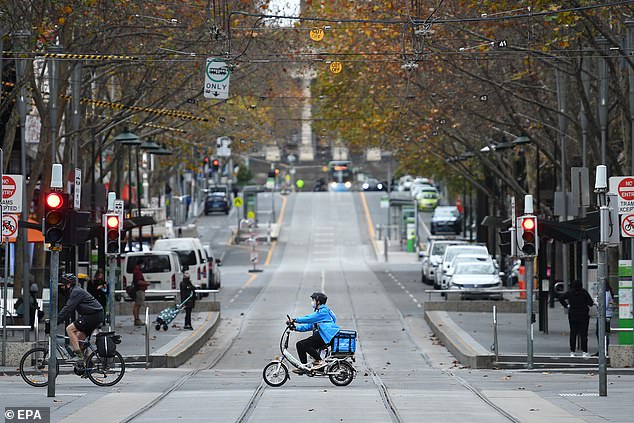 The cluster, which has been linked to a highly infectious double mutant Indian strain, grew to 60 cases on Wednesday (pictured, near empty streets in Melbourne’s CBD)

NSW Health revealed the roadtripper began their journey on May 23 first stopped off at Cooked Goose Café in picturesque Hyams Beach at 10am to 12pm after a long drive.

They then drove a little farther to Coles in Vincentia at 12pm to 1pm to get supplies for their overnight camping trip.

Next they pitched a tent at Green Patch campground in Booderee National Park on Jervis Bay and stayed there until about 9am on May 24.

On the way home to Melbourne they stopped at Shell Coles Express in the shadow  of the Big Merino in Goulburn sometimes between 10.30am and 11.30am.

Across the road they munched on some tasty pies from the legendary Trapper’s Bakery between 10.30am and 11.30am, before driving home.

About 6.5 million Victorians were ordered into lockdown at 11.59pm last Thursday after a rapidly-spreading Covid-19 outbreak in the northern suburbs of Melbourne. 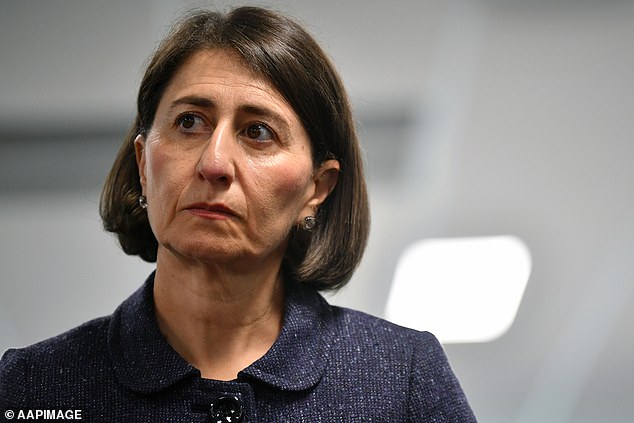 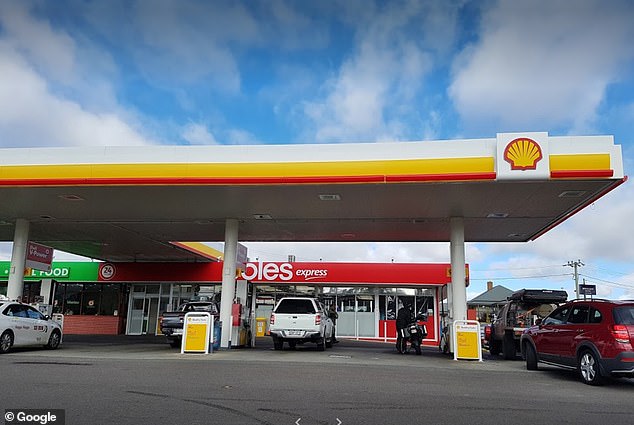 Anyone who visited the Shell Coles Express Big Merino, at Goulburn on Monday May 24 between 10am-11.30am is urged to self-isolate and get tested immediately 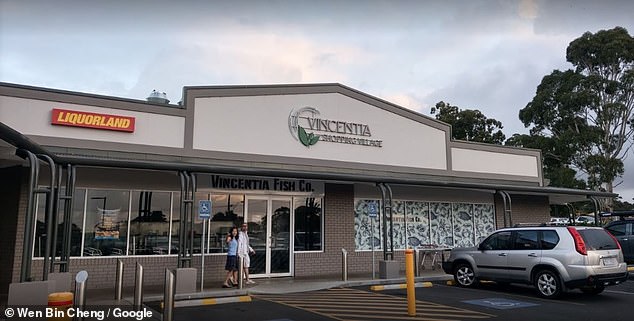 Health authorities remain on edge after it was revealed that complete strangers had been infected by walking past Covid-positive cases.

Victoria’s Department of Health said ‘four or five’ cases emerged from ‘brushing past’ strangers who unwittingly transmitted the virus.

The lockdown is Victoria’s fourth in 14 months, as the list of exposure sites has now swelled to hundreds of venues.

Under the stay-at-home orders, Victorians can only leave their homes for five essential reasons with restaurant dining and public gatherings among many banned activities.

An official announcement has not been made about extending the lockdown, but sources said it was likely to remain in place.

One of the scenarios being discussed is to extend the shutdown until after the Queen’s Birthday long weekend which concludes on June 14, The Australian reported.

But with the draconian lockdown measures costing the state about $125million a day, according to KPMG modelling, and no JobKeeper subsidies in place, it remains unclear as to how vulnerable Victorians forced out of work will be supported.

The difficult news for long-suffering Victorians comes as yet another aged care home has been forced into lockdown on Tuesday after fears the facility had been exposed to the virus.

Last year in the midst of Victoria’s brutal 112 consecutive-day, the vast majority of the state’s 900 Covid-related death were in aged care settings.

Menarock Life Aged Care facility in Heathmont, in Melbourne’s east, sent an email warning staff that one of its workers had been identified as a primary contact of a Covid-positive case. 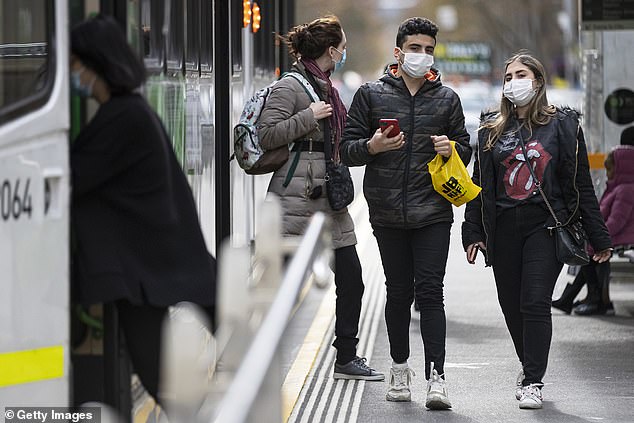 Authorities have refused to rule out extending the state’s seven day ‘circuit breaker’ lockdown as the list of exposure sites swelled to 329 venues (pictured, commuters in Melbourne)

Residential manager Nellie Wang said ‘I understand how stressful it can be, but I assure you we are doing everything possible to minimise any effect on our close-knit community’.

‘I have been advised by the Victorian department of health Greenway Gardens should enter a full lockdown of the entire facility immediately.

‘All residents (are) required to be isolated in their rooms until further notice.’

Any staff who worked at the facility on May 31 between 7am to 3pm is now required to get tested immediately and self-isolate until they receive a negative test result.

The Syrian Foreign Ministry: What the American embassy in Damascus published is “lies”