Dying for a selfie! Family risk their lives to line up for group shot on level crossing in shocking video

This is the shocking moment a family risk their lives to line up for a group selfie on a level crossing.

Footage shows a group of four people huddling together and posing for a selfie while stood on the railway line at Matlock Bath station in Derbyshire.

Other clips capture a person posing for a photograph on the tracks, a boy playing around on the crossing and even a dog running over the line.

Network Rail shared the video earlier this week as a warning for parents to remind their children about the dangers of the railway during half term. 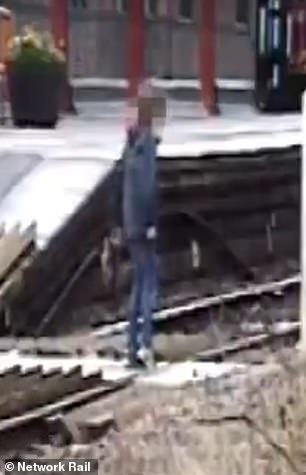 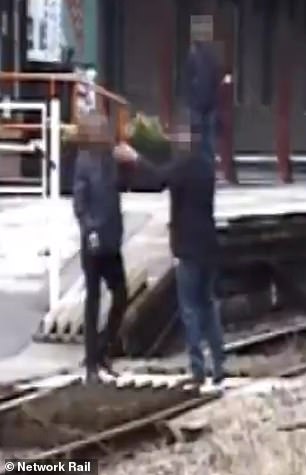 A boy pictured playing around on the level crossing, left, and two other people on the line. The footage was shared by Network Rail on Monday in a warning to parents over half term

The company tweeted on Monday: ‘This week is half term for many. Please remind your children to stay safe and NOT mess around on level crossings – like this!

Social media users reacted to the shocking clips, with one commenting: ‘Gosh so dangerous…’

Another wrote: ‘Good grief. What is wrong with people.’

A third added: ‘The railway network is not a playground.’

A fourth tweeted: ‘Trains can be much quieter than you expect… And just because there is a gap in the timetable doesn’t mean there won’t be a freight train at 75mph zooming through!’

The Office of Rail and Road, an independent safety and economic regulator of Britain’s railways, also said of the footage: ‘This is so important. Misuse can result in serious injury or even death.

It follows more than 5,000 trespass incidents being recorded between June and September this year while lockdown was eased across the UK.

The total number of incidents in September came to 1,239 – the worst recorded for that month in the past five years. 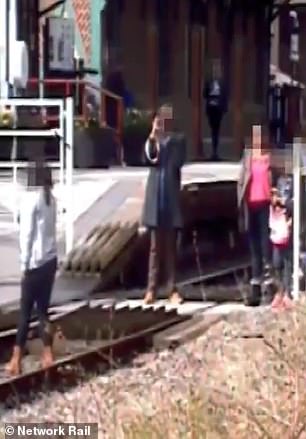 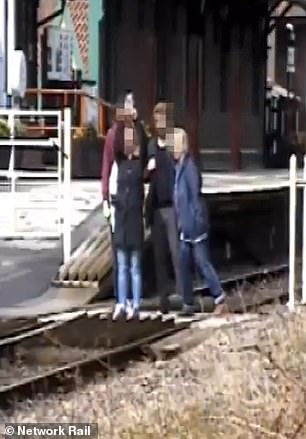 Two adults stand on the crossing while taking a picture of a girl on the line, left, while a separate group of four people, right, were also seen posing for a selfie 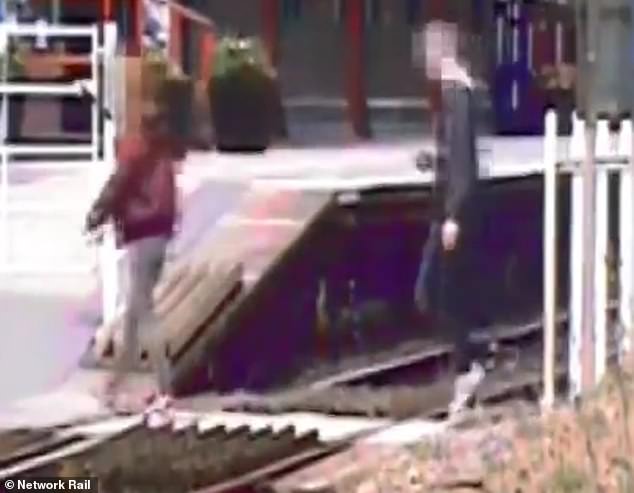 Two people seen walking over the level crossing in the footage shared on Monday. Trespassing on the railway is illegal and can result in being taken to court and handed a £1000 fine 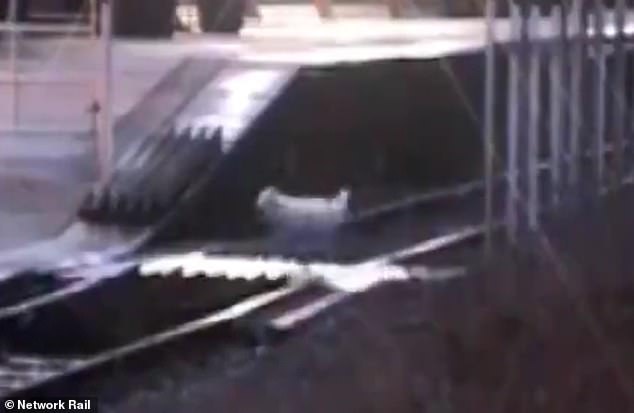 Even a dog, pictured above, was seen crossing the line. Social media users reacted to the footage, with one posting: ‘The railway network is not a playground’

Trespassing on the railway is illegal and can result in being taken to court and handed a £1000 fine.

Since 2009, over 1,250 crossings have been closed in the UK in a bid to increase safety, with barriers also installed at 66 open crossings.

Network Rail states on its website: ‘There are around 6,000 level crossings on our rail network and we have a legal duty to assess, manage and control the risk for everyone.

‘Level crossings can be categorised by their type, but each is unique, so we’ve worked with our rail industry partners to develop a standardised method for assessing crossing risk.

‘Factors taken into account include frequency of trains, frequency and types of users and the environment and where the crossings are located.’