A third-generation farmer in Oregon has gone viral with his eye-opening video about why onions are stored for up to eight months in the US before hitting stores — as he shares his tips for keeping them fresh at home.

Shay Myers, the CEO of Owyhee Produce, is using his popular TikTok account to give people an inside look at farming, and many of his videos are inspired by his viewers’ questions.

One of his TikToks about harvesting onions led someone to question why they were stored for so long, asking: ‘Are the onions that I get from the store over a year old?’ The 40-year-old farmer’s response has been viewed more than four million times. 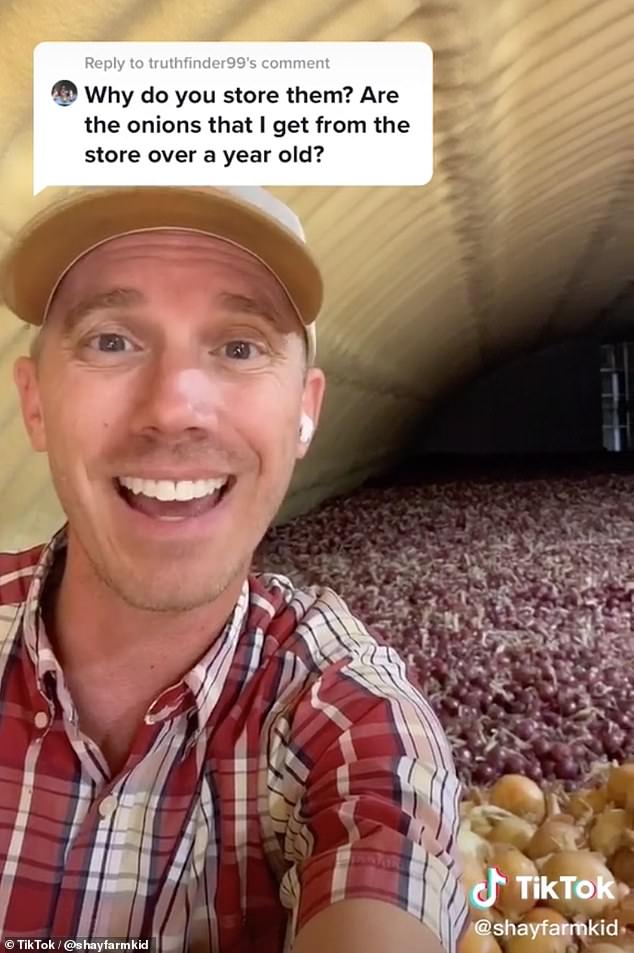 The more you know: Farmer Shay Myers, the CEO of Owyhee Produce, has gone viral for his video explaining why they store onions for about eight or nine months

In the clip, he can be seen standing in a massive storage unit surrounded by thousands of harvested onions.

Myers went on to explain that if you buy an onion at the grocery store in the first few weeks of October, it is ‘coming straight out of the field’ whereas they rely on stored produce from November through mid-April.

‘Your onions have to come out of a big storage like this one behind us so that we can continue to supply you so that you can have food to eat,’ he said. ‘Otherwise, everything would have to come from South America.’

Myers, who lives on the border of Oregon and Idaho, where his farm is located, told AgWeb that the viral video came about after he discussed onion storage in an earlier TikTok. 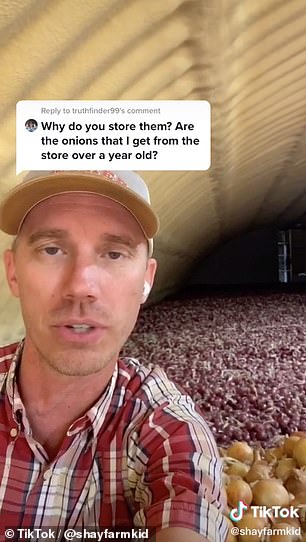 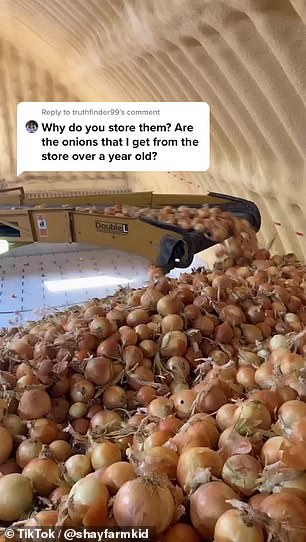 Explainer: Myers said root vegetables have to be stored in North America to be used later because the continent is not close enough to the equator to harvest onions year round

Going viral: The video has been viewed more than four million times, and many people admitted they were unaware that onions were stored for this long

‘The reason that I did it initially is I had made some commentary earlier about how long onions store and how we store onions for seven, eight and nine months,’ he said. ‘Someone responded, “Well, you mean my onions are a year old?”‘

The farmer’s TikTok struck a chord with viewers, which led to the clip’s increasing popularity over the past month.

The educational video has been viewed millions of times since it was posted in October. Thousands of people left comments, and many admitted they didn’t know anything about how root vegetables are stored.

‘Omg I have literally never thought about these logistics,’ one person wrote, while another added: ‘Yo this is so cool and informative.’ 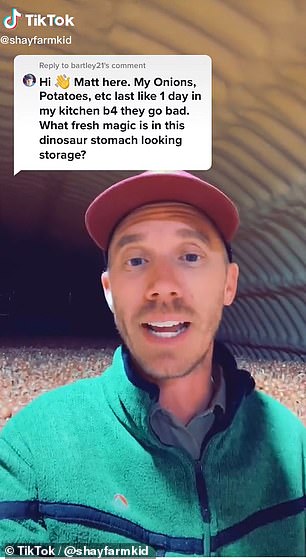 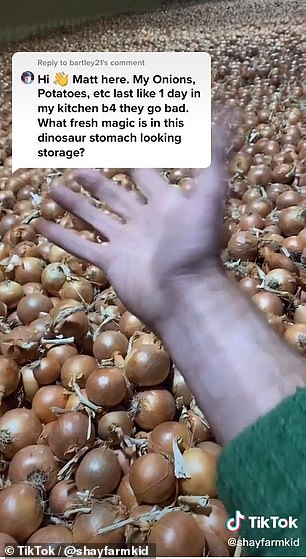 He knows! In a follow-up video, Myers shared how to keep onions fresh at home, insisting that the refrigerator is ‘the worst place you can put them’

‘Onions do be hittin’ different right now,’ someone else joked.

One man noted that he was ‘pretty surprised’ to learn that ‘folks don’t already understand this,’ and Myers agreed.

A number of people also asked Myers why their onions go bad after a week or so at home if they can be stored for up to eight months.

Myers once again filmed himself in the storage unit, explaining that air comes in from the front and underneath the 12 feet of onions before exiting out the back. 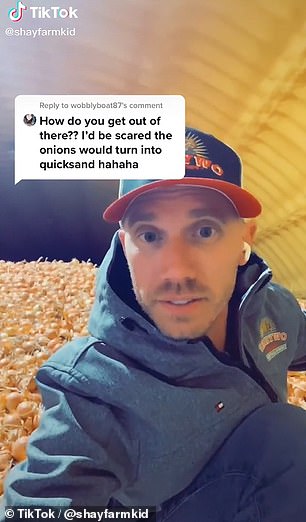 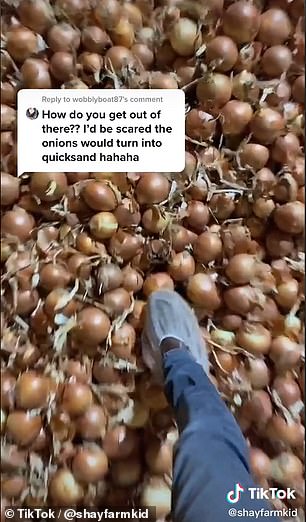 Questions: Hilariously enough, people were extremely curious about how he was walking through the onions. He revealed he has to wear plastic shoe covers before stepping on them 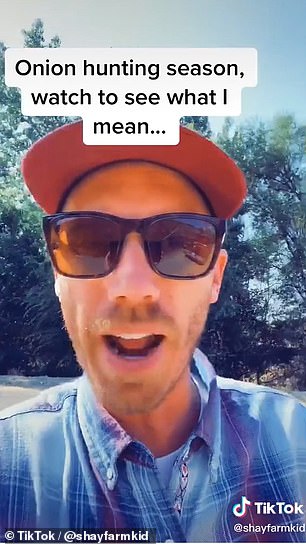 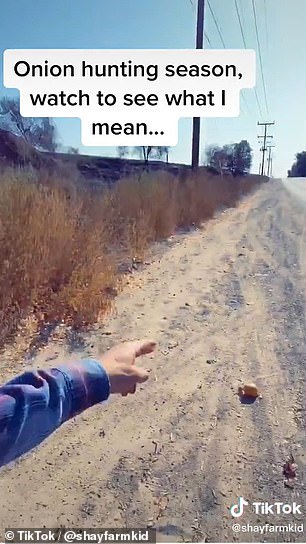 Free produce: Myers, who lives on the border of Oregon and Idaho, said people who live near the farm can just pick up fallen onions on the road during harvesting season

‘It’s all about the airflow,’ he said. ‘That’s how we keep the onions good. The other thing, we keep the temperature constant, consistent, and the humidity low.

‘So at home what can you do? Number one, don’t put your onions in the fridge. It’s the worst place you can put them,’ he insisted. ‘Number two, keep them dry. If you put them in a paper bag, awesome. It kind of helps wick some of the moisture away.

1. Never put your onions in the refrigerator. That is the worst place to store them.

2. Keep them dry. Try storing them in a paper bag to wick some of the moisture away.

3. Put them somewhere where the temperature is consistent such as under the sink or in the basement.

‘Number three, put them somewhere where the temperature is consistent, under your sink, the stairwell in your basement, something like that. Your onions will last for a really long time.’

Hilariously enough, people were extremely curious about how he was walking through the onions in the clip, with some admittedly nervous he was going to lose his wireless earbuds in the pile.

‘How do you get out of there?’ one person asked. I’d be scared the onions would turn into quicksand.’

Myers shared that all he has to do is put on plastic shoe covers and walk onto the onion pile.

‘It’s kind of aa lot softer than you think, actually,’ he said. ‘But once you’re on the top of the pile, you look at my feet, you don’t really sink that much. It’s not like quicksand.’

However, the farmer noted that if he were to drop his AirPod into the pile of onions, ‘it would be gone forever.’

Myers is even able to get a sense of the quality of the onions by how much his feet sink in when he walks on them.

‘If our feet sink, like this, that’s actually a good thing,’ he explained. ‘We want our feet to be able to sink because it tells us that the onions are nice and firm, they have good skin on them, and they’re good quality.

‘So we can actually tell something just by walking on them.’

PS5 Doesn't Have Quick Resume, But Activity Cards May Offer a Workaround

Nice confirm sacking of Patrick Vieira after FIVE straight defeats, as his assistant Adrian Ursea is...