Farnborough 0-1 Tonbridge Angels: Home side’s FA cup dreams end with defeat and with Covid-19 rules and revenues plummeting their status as a club might not be far behind

By George Bond For Mailonline

From behind a mask and a desk in his office before this FA Cup second qualifying round tie, Farnborough chairman Simon Gardener ponders, ‘How long can this keep going?’.

He is not, like many of the 382 afforded the privilege of attending a live football match in the UK, talking about the possibility of a lucrative cup run, but the very existence of his club.

The cup dream, it turned out, lasted just 90 more minutes before a 1-0 defeat to Tonbridge Angels. But in the grip of Covid-19 rules and with revenues plummeting, Farnborough’s status as a club might not be far behind. 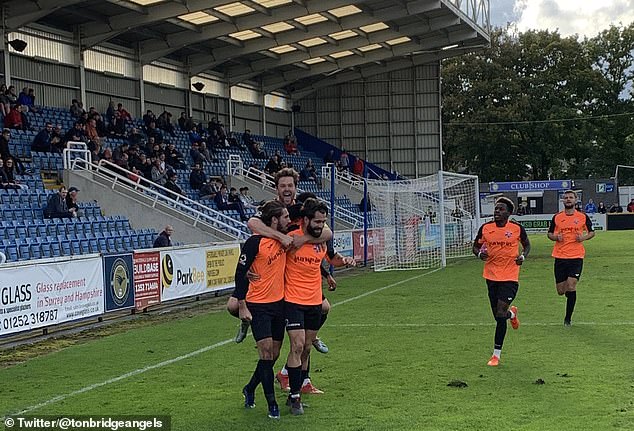 ‘We’re running at a deficit for each game,’ Gardener tells the Mail on Sunday. ‘It can’t be sustained.

‘It’s something I’m talking to the owner about every day – in six months’ time, if things don’t improve, we will seriously have to start looking at what we can offer.’

Gardener is also a director of the Southern League, covering 84 clubs in tiers seven and eight, and in his experience Farnborough might be one of the luckier ones in this financial crisis.

‘There’s 10 clubs (at this level) on the edge of putting the padlock on the gates,’ he says. ‘A lot of clubs need help now. We’re not talking about millions of pounds, they need help paying utility bills. The costs of putting a game on.

Thanks to social distancing and restrictions at the bar, Farnborough’s losses are up to £900 a match before wages. And Saturday’s cup tie will see more money trickle out due to the mandatory splitting of the gate money, even though – ostensibly – Tonbridge aren’t allowed any fans.

They’re in tier six, see, and from that point upwards clubs are not allowed support, even away from home. The virus, of course, knows only to attack fans further up the pyramid.

The rules were mostly abided by, with the 382 socially distant, hands sanitised and whereabouts tracked and traced. Farnborough’s website also advised against shouting, although Tom Derry’s winning goal, poked in at a goalmouth scramble on 66 minutes, put paid to that – revealing a few dozen Tonbridge interlopers hiding among the home crowd.

It was the fifth game of the season for Farnborough, and each has cost them money. If Gardener had had it his way, however, might they not have played at all?

‘Maybe we shouldn’t have started the season,’ he says. ‘Maybe scrap this season and do mini-leagues after Christmas.

‘I think that would have been a fantastic idea, but decisions were made above us.’

The pandemic is the latest scourge on Farnborough’s finances, after an expulsion from the sixth tier in 2007 and another administration in 2013. They will still pick up more than an £1,000 for losing this match, but it’s a sticking plaster on a bullet wound for a club that doesn’t know if it will survive the winter.

‘It’s massively heartbreaking for the community,’ says Gardener. ‘They’ve gone through it twice.

‘If we go for a third time, that’ll be it for some people. There’ll be no club left in Farnborough.’

Cashing In On Used Cars