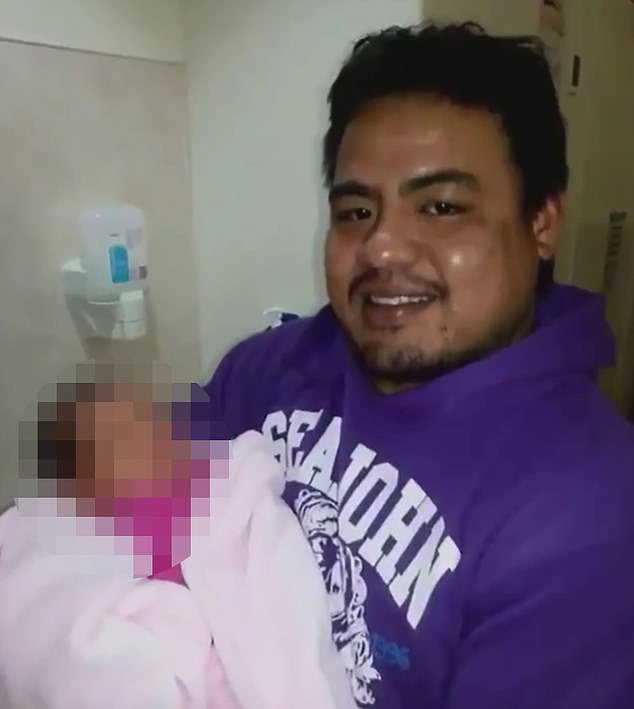 A father-of-five died in a hail of bullets outside a pool hall during a night out in in what police think was a botched drive-by shooting of the wrong man.

Ikenasio ‘Sio’ Tuivasa, 33, was outside the All Star Lounge pool hall on Westwood Drive in Ravenhall, Melbourne, when he was shot at midnight on Saturday.

There was no warning, as Mr Tuivasa, originally from Samoa, was enjoying his night with family and friends.

Father-of-five Ikenasio ‘Sio’ Tuivasa, 33, was shot dead outside a pall hall during a night out with friends and family at midnight on Saturday

Ikenasio ‘Sio’ Tuivasa with his beloved family. His grieving friends and relatives can’t understand how a night out could lead to his being shot dead in a flurry of bullets

His family rushed him to hospital where he died.

Distraught relatives posted messages of loss online on Sunday, sharing their grief for the much-loved father and brother.

‘You took a piece of my heart with you so make sure you look after it properly, OK,’ wrote one grief-stricken relative on Facebook.

‘We love and miss you so much, our brother shorty, rest in god’s loving arms bro til that glorious day.’

This 24-year-old man from Williams Landing was shot in the leg. Pictured: he limped back the next day to retrieve his car from outside the All Star Lounge pool hall in Ravenhall

Victoria Police Homicide Squad Detective Sergeant Simon Quinnell said the midnight shooters may have got the wrong man, as it was unlikely they deliberately targeted Mr Tuivasa.

‘He was a family man and certainly someone you wouldn’t expect this to occur to,’ he told reporters on Sunday.

‘We’ve looked in to the deceased’s criminal background – very little is there, and certainly nothing to suggest anything he’d be involved in would lead to this.’

As the gunmen fired shots from their moving vehicle, another man caught a bullet in the leg and was taken to Royal Melbourne Hospital.

Mr Tuivasa lost his life after he was shot outside the pool hall. Family and friends rushed him to hospital but he couldn’t be saved

The 24-year-old from Williams Landing limped back to the scene yesterday to retrieve his car, telling news crews he was just unlucky to be hit.

Lounge owner Makram Richani said loud music drowned out the noise of the shots – the first he knew was when people ran in with the man who was shot in the leg.

‘People started running in, no one knew what was going on,’ he told the Herald Sun.

‘We brought the man upstairs and I was on the phone to the paramedics.

‘The guy who got shot in his right leg, near the knee, I was applying pressure to it. He’d been a patron for three years.’

Police forensics office found a black tomahawk on the ground outside the hall on Sunday, which was taken as evidence.

A number of shots were fired from a moving vehicle outside a pool hall on Westwood Drive at Ravenhall around midnight. Pictured: the scene

The reckless killers who shot into a crowd of people outside a pool hall on a Saturday night are still on the run.

Police said on Sunday afternoon that nobody has yet been arrested or charged.

‘No arrests have been made and the investigation into the incident remains ongoing,’ Sergeant Julie-Anne Newman said in a release.

Police are urging nearby businesses who may have CCTV footage to help them with their recordings.

Police asked anyone who witnessed the incident or with any information to call them.

CPAC: Trump to return to political stage at conservative conference

CPAC: Trump to return to political stage at conservative conference