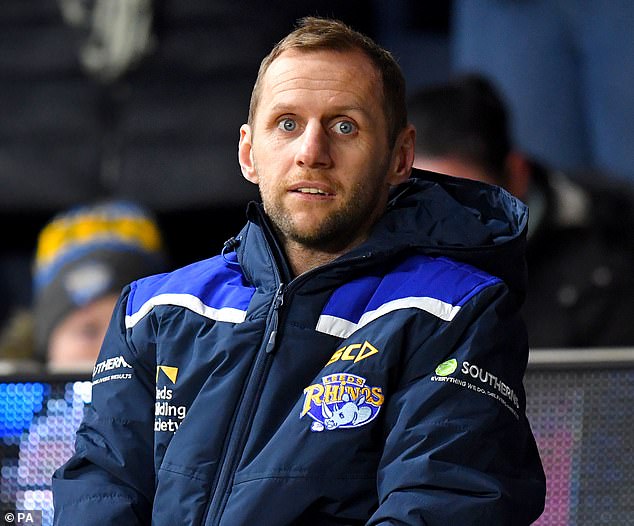 The father of former rugby league player Rob Burrow has said that the sport must actively investigate whether head injuries are linked to brain diseases like motor neurone disease, which has shattered his son’s life.

Geoff Burrow, an official at the Rugby League Players Association, said that since his son’s devastating diagnosis he has frequently asked himself if knocks sustained in the sport might be a cause.

He pledged that a push for scientific investigation will run in tandem with his son’s extraordinary fund-raising efforts.

Mr Burrow said: ‘As parents you think especially for someone as small as Rob, is there a danger. You were always worried he will get hurt. He took quite a few knocks and was concussed quite a few times.

‘We want to raise awareness with players. We want to get more actively involved in supporting the different research and campaign. We want to involving the players in that. If it is shown to be sports injuries which cause it, then there are a lot of repercussions. We have to ask the questions.’

The effects of MND on his son in just one year have been devastating. Once the heartbeat of an all-conquering Leeds Rhinos side, Burrow is now wheelchair-bound and communicating through the same kind of computer-based voice system employed by Professor Stephen Hawking, who was stricken by a form of the same disease.

The unremitting nature of the illness is by no means slowing his attempts to raise awareness and money for research. A racehorse, named Burrow Seven in honour of the rugby league player and his old squad number, is the new focus of his fund-raising efforts.

The 38-year-old has joined forces with ex-team-mates to purchase the thoroughbred. Members will be able to part-own the grey gelding, with profits from the £59 joining fee and prize money from races the horse wins going to the MND Association.

Burrow’s father insists that investigations into possible links must begin with no preconceived notions.

‘There’s a five per cent chance of this being inherited,’ he said. ‘You look at some people who come out publicly but then you think if it’s not inherited and people suffering from it don’t play sport, how has it happened?’

Burrow Snr said in BBC’s harrowing documentary portrayal of his son’s life with MND that rugby could have some hard decisions to make if medical science did demonstrate a link between the illness and head injuries.

A major study into footballers by led Glasgow University’s Dr Willie Stewart, published last year, found there was a four-fold increase in MND among former players.

But there is a general acceptance that far more research is needed into both football and the rugby codes, with the families of players who have lived with dementia being asked to consider donating those players’ brain for research after their death.

The circumstantial evidence in rugby is provided by the list of those who have developed MND: the late Joost van der Westhuizen, Scotland’s Doddie Weir and Burrow.

‘We must carry on looking at this,’ said Burrow’s father. ‘We owe it to all the players to do that.’