Regulation of e-cigarettes by the U.S. Food and Drug Administration (FDA) can continue after the Supreme Court declined to hear a case on Monday that would have limited the government’s authority to oversee the vaping industry.

The appeal from Big Times Vapes Inc, a Mississippi vape shop, centers around the 2009 Tobacco Control Act (TCA), in which Congress gave the FDA broad authority to regulate tobacco products.

This allowed the federal agency to restrict ingredients, block the sales of certain products and limit advertising.

In 2016, the FDA said it would start regulating e-cigarettes, vape pens, cigars and hookah because, under federal law they were all classified as ‘tobacco products.’

Big Time Vapes argued that Congress had violated the U.S. Constitution by giving the FDA such sweeping power. 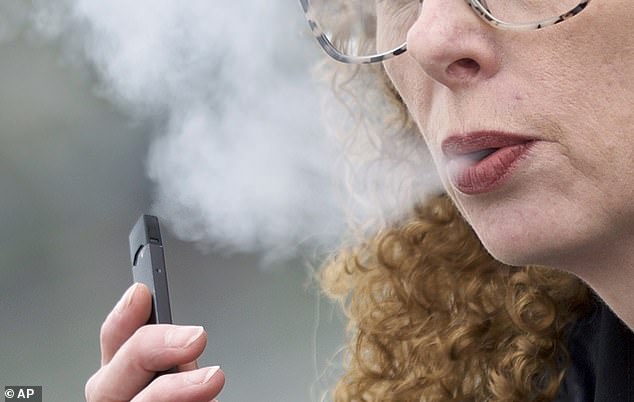 Big Times Vapes Inc, a Mississippi vape shop, filed an appeal before the Supreme Court arguing that Congress violated the Constitution by giving the FDA power to regulate the vaping industry, but the high court rejected the case (file image)

‘The authority to decide the circumstances under which a given activity or product shall be subjected to federal regulation is quintessentially one of legislative policy,’ the company wrote, according to Bloomberg.

Big Times Vapes also argued that the law gave the FDA ‘no guidance as to the circumstances under which the Secretary should regulate additional products.’

The company says this means that decisions, such as to block sales of new products, fell to the FDA’s ‘unbridled discretion.’

In response, the FDA argued that the law allowed the agency to regulate products that could lead to nicotine addiction.

‘In the definitions, findings, and statements of purpose that it included in the TCA, Congress laid out intelligible principles with appropriate boundaries for FDA to apply,’ the FDA wrote in a brief, according to Fox Business.

‘[T]hat FDA should comprehensively regulate the tobacco industry to protect the public from nicotine dependence, tobacco-related health risks, and false and misleading advertising – with a particular emphasis on protecting children from such dangers.’

President Joe Biden’s administration advocated for the Supreme Court to decline to hear the appeal, according to Bloomberg.

Officials argued that the FDA need to protect the public, especially children, from health risks and false advertising.

‘In the definitions, findings, and statements of purpose that it included in the TCA, Congress laid out intelligible principles with appropriate boundaries for FDA to apply,’ acting U.S. Solicitor General Elizabeth Prelogar wrote in court papers, viewed by Bloomberg.

‘That is more than Congress was required to do to satisfy the non-delegation doctrine.’

Use of e-cigarettes has surged since they were introduced to the U.S. marketplace in 2007, according to the Centers for Disease Control and Prevention.

And they continue to be the most used tobacco product among American teens.

A recent CDC report found that nearly 20 percent of high-schoolers use e-cigarettes and other vaping products.

This means they have surpassed cigarettes, cigars, chewing tobacco and other conventional products in popularity in that age group.

Some studies have found that e-cigarettes have negative effects on health while others tout them as healthier than combustible tobacco products.