The US Food and Drug Administration will add a warning to the Pfizer and Moderna vaccines after the CDC said there is a ‘likely link’ between them and rare cases of heart inflammation in teenagers and young adults.

The Centers for Disease Control and Prevention made the announcement Wednesday during a presentation.

The Moderna and Pfizer vaccines use mRNA technology, while the Johnson & Johnson vaccine uses the more traditional virus-based technology. 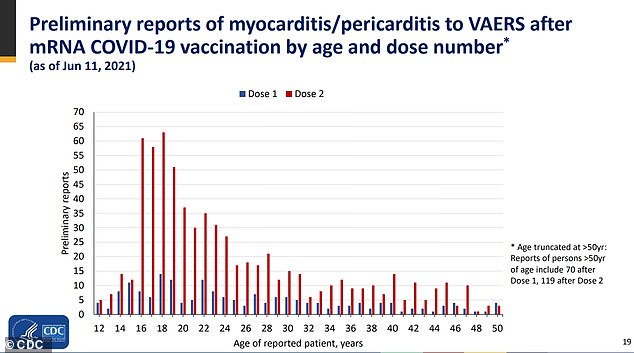 The CDC’s COVID-19 Vaccine Safety Technical Work Group said Wednesday that there is a ‘likely link’ between rare heart inflammation and vaccines, especially after the second dose in adults under age 30

Young males were up to seven times more likely to report heart inflammation, known as myocarditis, than young women 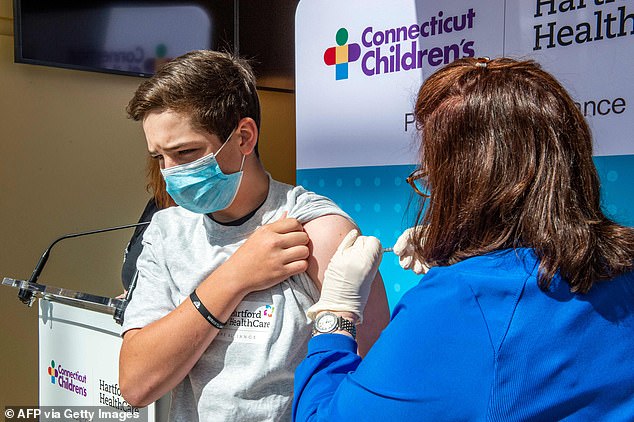 So far, 484 cases have been reported out of 90.6 million doses, which means the risk occurs in 0.000534% of young adults. Pictured: Max Zito, age 13, is inoculated by Nurse Karen Pagliaro at Hartford Healthcares mass vaccination center at the Connecticut Convention Center in Hartford, Connecticut, May 13

With more than 90.6 million young Americans under age 30 who have received one or both doses of the Pfizer and Moderna vaccines, it means just 0.000534 percent of people who have been administered the shots have reported such an effect.

‘The government is not being transparent about the risks’: Inventor of MRNA vaccines says people should not be forced to take experimental COVID vaccines because risks aren’t known and under 18s and those who’ve had virus shouldn’t take it

The inventor of mRNA vaccines said ‘the government is not being transparent about the risks’ of the COVID-19 vaccine after YouTube deleted a video where he discussed potential risks for young adults and teens.

Dr. Robert Malone, who invented the mRNA technology that’s now being used in the COVID-19 vaccine, told Fox’s Tucker Carlson on Wednesday night that there isn’t enough data about the risks for these age groups and doesn’t believe they should be forced to get vaccinated.

‘I don’t think the benefits outweigh the risks in that cohort,’ said Malone, referring to people in the 18 to 22 age bracket, ‘but unfortunately the risk-benefit analysis is not being done.’

‘My concern is I know there are risks but we don’t have access to the data,’ Malone said. ‘And so, I am of the opinion that people have the right to decide whether to accept vaccines or not, especially since these are experimental vaccines.’

Malone shared his concerns the same day that an advisory group for the Centers for Disease Control and Prevention say there is a ‘likely link’ between rare cases of heart inflammation in adolescents and young adults and the Pfizer/BioNTech and Moderna COVID-19 vaccines.

The Moderna and Pfizer vaccines use mRNA technology, and the Johnson & Johnson vaccine uses the more traditional virus-based technology.

In a presentation released earlier in the day, the COVID-19 Vaccine Safety Technical (VaST) Work Group discussed nearly 500 reports of the heart inflammation, known as myocarditis, in vaccinated adults under age 30.

The group of doctors said he risk of myocarditis or pericarditis following vaccination with the mRNA-based shots in adolescents and young adults is notably higher after the second dose and in males.

The study comes as the amount of US cases are just below 33.6 million and the number of COVID-related deaths are at 602,836.

‘Young adults in the prime of their lives are being forced to take the vaccine because Tony Fauci said that,’ Carlson said during Wednesday night’s show, adding that Malone ‘has a right to speak,’ given his expertise.

Malone was a guest speaker on a podcast that included Bret Weinstein, who is an evolutionary biologist, and Steve Kirsh, an American serial entrepreneur who has started seven companies.

The podcast was uploaded to YouTube which was flagged as sharing misleading information about the COVID-19 vaccine and removed.

In particular, YouTube flagged statements about how the ‘spike protein’ used in the COVID-19 vaccine, which is how mRNA vaccines work, are toxic.

During the podcast, Malone said he sent ‘manuscripts’ months ago to the U.S. Food and Drug Administration claiming the spike protein used in the COVID-19 vaccine posed a health risk.

‘And their determination was that they didn’t think that that was sufficient.

Britney Spears says she's blocked from removing contraception, wants to 'have a baby'