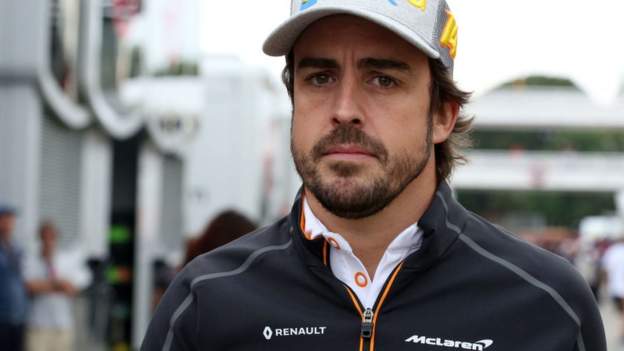 
Fernando Alonso said the performance of Renault’s Formula 1 car was a “nice surprise” after making his return to the cockpit at Barcelona on Tuesday.

The two-time world champion drove a 100km test for Renault as part of his refamiliarisation process with F1 and the team before his return next year.

He last drove an F1 car at a test in Bahrain for McLaren in April 2019.

Alonso said: “The car performed well in the last races and I felt the grip and good potential in it.”

He added: “I wasn’t able to maximise the performance because I’m not up to speed yet but I’m happy with the day.”

His last competitive action in any motorsport was in the Indianapolis 500 in August, and before that in the Dakar Rally in January.

Alonso added that he “felt the step forwards” in the Renault engine since his last experience of it in the McLaren.

The 39-year-old has signed a two-year contract to return to F1 with Renault from next season, when the team will be renamed Alpine after the French car company’s performance brand.

Renault are trying to ensure Alonso is as prepared as he can be for his comeback, especially in light of the fact that there are only three days of pre-season testing next year.

Because these have to be shared with team-mate Esteban Ocon, that means Alonso will have only one and a half days in the revamped car before the start of the 2021 season.

“It felt amazing to be able to drive these cars after two years and feel the speed again, how everything comes so fast, corner after corner, the performance under braking and all the things a Formula 1 car has to offer,” Alonso said.

He said the test was “about working with the team to do a couple of laps and for me to find comfort in the seat, the steering wheel and the pedals. These are things for next year which, over winter, could be very tight. It’s our first steps.”

At the Eifel Grand Prix on Sunday, Daniel Ricciardo, who is leaving Renault for McLaren next year, scored the team’s first podium since Renault’s return as a constructor in 2016.

Alonso said: “I know what the team is capable of and I know the prospects for the future are good. The podium is a thing that had to happen.

“The most important thing is to follow the trend that we see now, keep the momentum into next year, especially for 2022, and I think we know how to do it.”