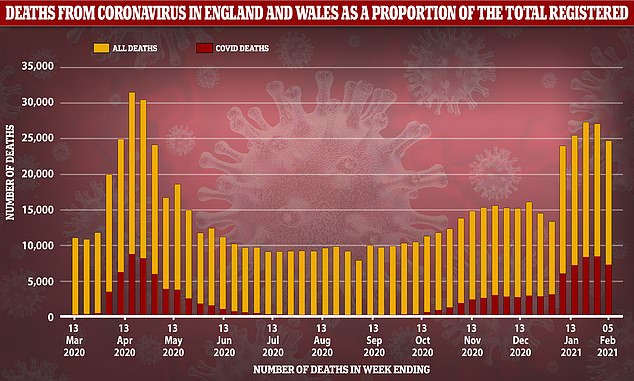 Fewer non-coronavirus deaths are occurring now than during the peak of Britain’s outbreak last spring because the pandemic front-loaded fatalities, scientists have said.

Official figures show 136,111 people have so far passed away from reasons other than coronavirus in England and Wales since the start of November, when the second wave took hold. This was below the five-year average.

For comparison, there were 152,000 non-Covid deaths in the worst three months of the crisis last spring, between March and June, which was 8 per cent above the five-year average.

Dr Jason Oke, an Oxford University statistician, told MailOnline ‘displacement from the first wave [of people who] died from Covid in April instead of December by other causes’ could be to blame.

He also suggested it could be down to fewer deaths from other respiratory illnesses, such as flu.

And the lack of Covid testing during the first wave means many virus-related deaths would have been attributed to conditions other than Covid, therefore inflating the non-Covid fatalities.

The true threat Covid-19 posed was not properly understood last spring and, as a result, stay at home orders were much stricter and almost all NHS services were shut to make room for an influx of virus sufferers.

It meant millions fewer unwell Brits came forward for hospital treatment or visited their GP, which is believed to have worsened the nation’s health and triggered a wave of avoidable deaths.

While many NHS services, including transplant operations, were cancelled during the winter crisis, officials have made a concerted effort to stay mostly open.

Simon Clarke, associate professor in cellular microbiology at the University of Reading, said it was possible that the first wave saw more deaths in vulnerable people.

He told MailOnline: ‘It strikes me that a few things are going on here. Firstly, the spring wave was caused by an R number of over 3, while R for the winter wave was probably not much higher than 1.5, so it was always bound to increase at a slower rate.

‘Also, when does the winter wave actually start? You could say that it starts to take off from October, albeit more slowly – it is the area below the curve that gives you the total number of deaths, not the height of the peak.

‘We know that the now dominant variant of the virus is more transmissible, so it is seemingly more difficult to drive down the numbers.

Every region of England saw the number of deaths from the virus it recorded fall in the most recent week. But they remained above 1,000 in the East of England and South East

Official data also reveals the number of deaths involving influenza also dropped in the most recent week. The flu has failed to take off this year, after mask-wearing and social-distancing measures prevented the virus from spreading

What experts have previously said about the health impact of lockdown

The startling research was presented to the Government’s Scientific Advisory Group for Emergencies (Sage) in July.

The document revealed 16,000 people died as a result of the chaos in hospitals and care homes in March and April alone.

The estimates, drawn up by civil servants at the Department of Health, the Office for National Statistics and the Home Office, were presented to Sage at a meeting on July 15.

The documents stressed that had nothing been done to stop the spread of the virus in March, 400,000 people could have died of Covid.

The document said: ‘We estimate changes to emergency care may account for 6,000 existing excess deaths in March and April 2020. If emergency care in hospitals continues to be low for a full 12 months, this could result in an additional 10,000 excess deaths.’

In the longer term, the officials estimate a 12,500 deaths over five years because of cancelled operations.

The impact on GP services could result in 1,400 deaths over five years from missed cancer diagnoses alone. The true impact will be much higher, they said, but they had been unable to model the impact on any disease area other than cancer.

The officials said lockdown will also lead to some reductions in mortality. Better air quality, fewer road accidents and less childhood disease will reduce overall deaths by roughly 1,000 over a year, they calculated.

And a further 4,000 lives will be saved thanks to ‘healthier lifestyles in the short-term’.

‘It is entirely possible that the first wave took more vulnerable – and not necessarily older – people.

‘I’ve heard a lot of anecdotes about hospital admissions being in younger people, so it will be interesting to see that data when it’s finally published.

‘Perhaps when this finally shakes out, it could show that the second wave was in relative slow motion.’

Figures show that during the first wave of the pandemic around 35,000 fewer people were diagnosed with cancer than would be expected.

Experts said the delays will cost lives, allowing tumours to grow and cancers to worsen.

The data from Public Health England’s National Cancer Registration and Analysis Service reveals 106,732 cases were diagnosed between April and September 2020, down from 142,324 the previous year.

At least 27million GP appointments were also ‘lost’ during the first peak of the pandemic.

NHS Digital estimates there were 26.7million fewer GP appointments in England between March and August last year, during the first Covid wave, compared n the same period in 2019.

That figure did not take into account the two national lockdowns that came afterwards.

Inspectors fear that ‘lost’ appointments with doctors have led to a significant deterioration in patients’ health and the worsening of other conditions such as asthma and diabetes.

Other harrowing figures show the number of stillbirths in England almost doubled last spring, according to the Healthcare Safety Investigation Branch (HSIB), and at least 250,000 women are overdue their cervical smear tests as a result of the coronavirus pandemic, NHS figures show.

Meanwhile data shows last March was the quietest month in A&E since NHS records began because of the pandemic and No10’s ‘Stay at home, protect the NHS, save lives’ slogan.

An Imperial College London study published last June found around 9,000 non-Covid deaths in England during the first three months of the pandemic were avoidable due to the ‘ripple’ effect on care.

It comes after ONS data yesterday showed 7,320 victims had Covid mentioned on their death certificates in England and Wales over the week ending February 5.

This was a 13 per cent drop from the previous week, and the first time that the number of weekly victims linked to the disease had dipped since the seven-day spell ending December 25.

The latest data also showed every region in England saw Covid deaths fall compared to the previous week. And the number of deaths from all causes also fell by seven per cent.

ONS death figures have only just shown a downturn because they lag roughly three weeks behind daily infection figures, due to the time it takes for each patient to fall seriously ill.