Cristiano Ronaldo, Lionel Messi and Robert Lewandowski to battle for FIFA’s The Best award after making the final three… with Leeds boss Marcelo Bielsa up against Jurgen Klopp and Bayern Munich’s Hansi Flick for manager gong

Robert Lewandowski will be looking to fend off competition from Cristiano Ronaldo and Lionel Messi to be crowned men’s player of the year after FIFA unveiled the shortlist for their annual The Best awards.

Lewandowski’s struck an unbeaten 15 goals and six assists that proved key to firing Bayern Munich to Champions League glory back in August and he will be favourite to win the award in front of Ronaldo and Messi.

Although Messi won the award in 2019, his selection among the final three is sure to cause debate given the lack of success with Barcelona compared to other seasons. 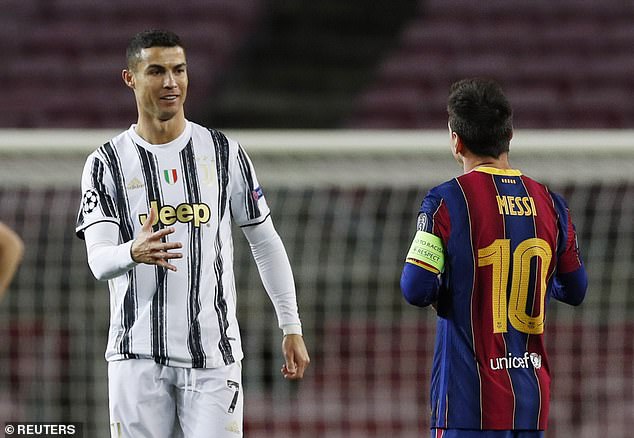 The Spanish outfit surrendered the league title to Real Madrid and were humiliated in the Champions League by Bayern following an 8-2 defeat in the quarter-finals.

By contrast the likes of Kevin de Bruyne and Neymar were also snubbed, with the latter helping inspire Paris Saint-Germain to a first ever Champions League final, as well as another French domestic title.

There is also a surprise in nomination for the best men’s manager with Marcelo Bielsa being named on the three-man shortlist after helping Leeds United back into the Premier League for the first time in sixteen years.

The popular Argentine is up against Jurgen Klopp, who won the award in 2019 and is nominated again off the back of guiding Liverpool to a first Premier League title in 30 years.

Bayern Munich boss Hansi Flick is also in contention having masterminded Bayern’s return to the summit of European football less than a year after taking charge of the German giants.

Liverpool and Bayern Munich will face off again in the battle for the best men’s goalkeeper when Alisson and Manuel Neuer respectively vie with Atletico Madrid’s Jan Oblak for the accolade.

There is more Premier League interest for the event which will take place on Thursday with Tottenham Hotspur’s Son Heun-min in contention to pick up the Puskas award for best goal.

Although no men’s England stars feature on any of the shortlist. Lucy Bronze is one of three players selected to win the best women’s player.

The England international full-back won a third straight Champions League trophy with Lyon back in August before joining Manchester City where last month she also picked up an FA Cup winners’ medal.

How to Talk So Little Kids Will Listen: A Survival Guide to Life with Children Ages 2-7