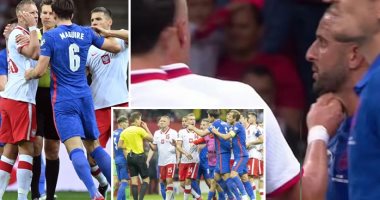 Press reports revealed that the International Football Association “FIFA” has opened an investigation into the allegations of the England national team that defender Kyle Walker was subjected to racist abuse during the match against Poland, which was held yesterday evening, Wednesday, in the European qualifiers for the 2022 World Cup, which ended in a draw. 1-1.

The British newspaper, “The Sun”, reported that FIFA would open an investigation into the matter, after the England national team lodged a complaint about the incident, which occurred shortly after the referee blew the whistle at the end of the first half, when the Polish defender appeared to be complete. glick Pinch Kyle Walker’s neck.

The newspaper pointed out that FIFA launched a “widespread” investigation after the FA chiefs alleged that Kyle Walker was subjected to racist abuse during England’s match against Poland by defender Camille. glick.

For its part, the Polish Football Association confirmed that Camil glick He did not make any racist remarks at Kyle Walker during yesterday’s Poland-England match.

The end of the first half between Poland and its guest England, witnessed a strong argument between the players of the two teams, specifically between Harry Maguire and Camille Glick, which led to the announcement of the match referee for the yellow card in the face of both players..

Harry Kane scored the England national team goal in the 72nd minute with a superb shot from outside the penalty area, which landed to the left of Juventus goalkeeper Chesney.

Kane raised his score to 41 international goals with the England national team, to be ranked fifth in the historical top scorer, with a goal difference from Michael Owen..

In the second minute of stoppage time, Damien Szymanski scored the equalizer for Poland with an assist from Robert Lewandowski..

With this result, the English team maintains the lead in Group I with 16 points, while the Polish team slipped to third place with 11 points, one point behind the runner-up Albania..