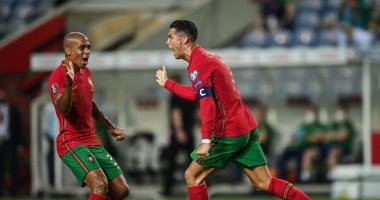 The Swiss Gianni Infantino, President of the International Football Association “FIFA”, congratulated Cristiano Ronaldo, who was able to be the only historical scorer around the world, overtaking the Iranian star Ali Daei, after scoring two goals in the Portugal national team match against Ireland in the European qualifiers for the 2022 World Cup. .

Cristiano Ronaldo became the record goalscorer in men’s international history, as the 36-year-old scored two late goals against the Republic of Ireland to turn the defeat into a victory in the Qatar 2022 World Cup qualifiers and jumped to 111 goals for Portugal, two goals behind Iran legend Ali Daei.

Gianni Infantino said: “This achievement rewards an impressive career of nearly two decades representing your country at the highest level, which is a testament to your tremendous commitment, dedication to your art and your incredible passion for football.”

Infantino added: “The record number of goals in men’s international football, you have become not only a national champion but an international icon and a role model for aspiring players around the world. Your skills and your constant drive for improvement deserve global praise and admiration. Paraben, Cristiano!”

In a related context, Cristiano Ronaldo, the captain of the Portugal national team, expressed his happiness at setting a new record, as the most international goalscorer, after leading his country to a fatal victory over its guest, Ireland.

Cristiano Ronaldo scored two goals for Portugal in the 89th and fifth minutes of stoppage time, with two headers, to reach his 111th international goal and is the only top scorer in the world teams, which he shared with Iranian Ali Daei, in his 180th international match with a score of 109 goal before the start of the match.

Ronaldo said in comments after the end of the match: “A record? I know that this is a record, and I am very happy, and it is another number that I put in the museum.”

Ronaldo continued, “I am very happy, I have a few more years of my career and I still want to shine and play in the best football league in the world. I dedicate tonight’s victory to the whole team, to all the Portuguese and to the family.”

He continued, “I am very happy, not only that I broke the record, but for the special moment we experienced, I have to appreciate what the team did, we believed until the end and I am very pleased.”