Incredible fight breaks out between a Land Rover driving ‘boomer Karen’ and a young couple as their parking leaves her struggling to manoeuvre the SUV out of her drive – but who is in the wrong?

An extraordinary war of words has broken out between a Land Rover driver branded a ‘boomer Karen’ and a young couple who she claimed blocked her driveway with their truck.

The couple shared the dispute to TikTok after the older woman took exception to them parking their truck near her garage – seemingly making it too difficult to back the $60,000 white SUV out into the Melbourne laneway.

In a vicious spray of insults, the young couple – who filmed the exchange – are branded ‘f***ing millennials’ while the woman is called a ‘boomer’ and mocked for ‘not using moisturiser’.

‘Listen – move your truck forward. Can you ask him to move the truck please?’ she asked the couple at the start of the footage, who were moving home at the time.

The younger bearded man then hit back, accusing the woman of spitting saliva in his face during her fiery rant during Melbourne’s Covid lockdown. 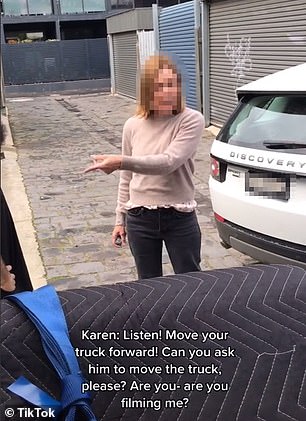 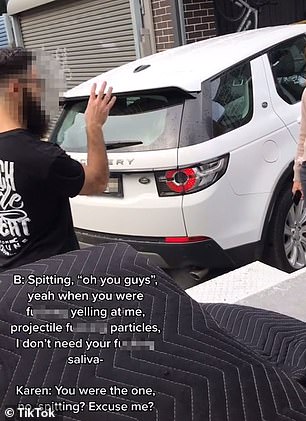 ‘Millenials’ vs ‘Boomers’: A woman driving a Land Rover and a young couple have gone head to head after she claimed their truck was preventing her from backing out of her driveway easily

Who is in the wrong?

‘You were f***ing yelling at me – projectile f***ing particles. I don’t need your saliva,’ he told her.

The couple claimed they had already backed the truck up as far as they could, leaving enough room for the woman to move the Land Rover Discovery.

The younger woman said the Land Rover driver could have backed out with the room she had, but wanted to do her normal reverse turn to exit.

There was a wall behind the truck and moving the vehicle forward would have meant the couple were blocking other residents’ driveways, the younger woman claimed.

‘I cannot negotiate the distance of the wall and the pavement lady,’ the bearded man said. 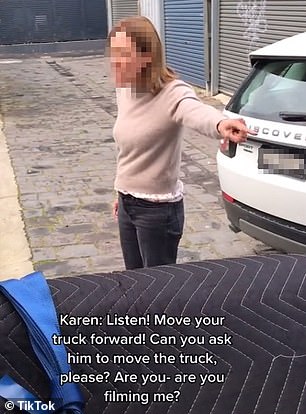 ‘Listen – move your truck forward. Can you ask him to move the truck please?’ she told the couple – who were moving home

‘If you want I can back up your s***ty Discovery and run it out that way.’

The driver refused to allow the man to back the car out for her, telling him ‘you’re not touching my car’.

‘You’re being very antagonistic. It’s unnecessary,’ the woman behind the camera then said.

A separate video showed the older woman’s husband getting involved in the argument after being called home from work by his wife to back the SUV out of the driveway.

‘What are you going to do? Put it up on TikTok or something? You f***ing millennial,’ the husband said.

‘You’re f***ing boomers reacting like this,’ the younger woman responded.

‘You heard of moisturiser?’

She revealed at the end of the video the husband eventually moved the SUV out of the driveway without the truck needing to be moved.

‘Have a pleasant day!’ the younger woman said.

The Papers: 'Millions face lockdown' amid fears for economy

Graffiti carved on an ancient Roman building some 1,900 years ago could be of the Crucifixion

Novak Djokovic says he’s grateful to a young boy who offered vocal support and advice throughout...