In clips posted to Instagram on Tuesday, at least three of the nighttime fights can be seen being played out in the famous Greenwich Village park.

Cops have clashed with revelers in the park since a 10 p.m. weekend curfew was enacted as part of the city’s crackdown on anti-social behaviour in the park. 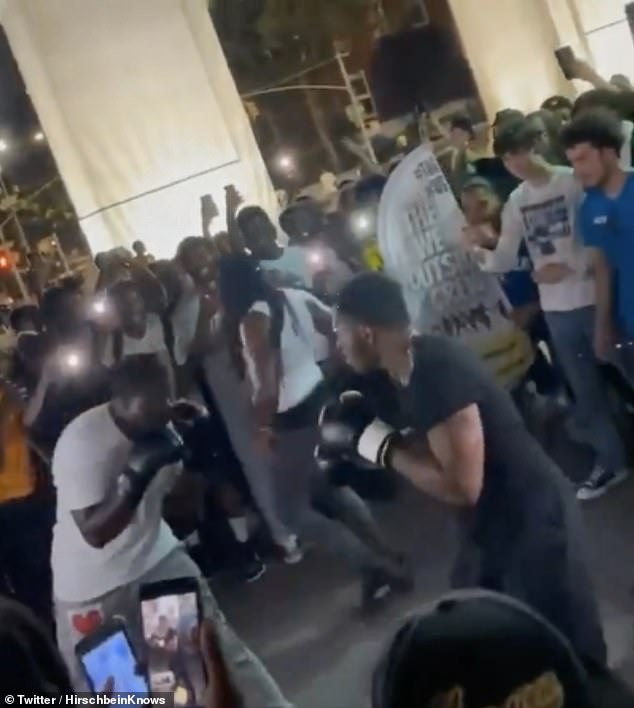 The videos show the fighters – presumed to be unprofessional – touching gloves before each fight in which they square off under the eyes of a referee.

None of the fighters are seen wearing much in the way of protective gear, and are surrounded a crowd of dozens of hollering people with the park’s famous arch in the background.

Others were posted by @theweoutsidecrew, which claims to hold ‘Pop up parties in NYC’ in its profile, which also says its ‘Spreading positivity through music & social justice.’

The footage of the various fights was posted early on Tuesday to the accounts’ Instagram ‘Stories’, which automatically delete after 24 hours of being posted.

One of the posts says the fight happened ‘last night’, suggesting that it took place on  the night of Monday, June 7.

A third user of the Facebook-owned social media site with the handle @callshaman – who was tagged in one of the posts as one of the fighters – wrote about the bouts in a post to his own story on Tuesday, seen by the New York Post.

‘The we outside crew hosted an event last night,’ the post read. ‘Part of it consisting of ‘Boxing’ one of the healthiest ways to release male testosterone.

‘Regardless, we partied right afterwards. All together as a community,’ the post continued. ‘There was no violence or aggression, it was a family vibe. we picked up after ourselves and no police presence. This is what our community looks like.’

A spokeswoman for the New York City parks department told The Post that no permits were issues for the fights in Washington Square Park, but added that it could not immediately confirm whether boxing matches could be permitted in parks at all.

The park has long been a place where people congregate – musicians and picnickers during the day, and students and people wanting to meet with their friends at night.

But there is also now a large homeless encampment in one corner, and there have been complaints from locals that it has become a draw for drug addicts, while alcohol-fuelled parties are held around the fountain through the night. 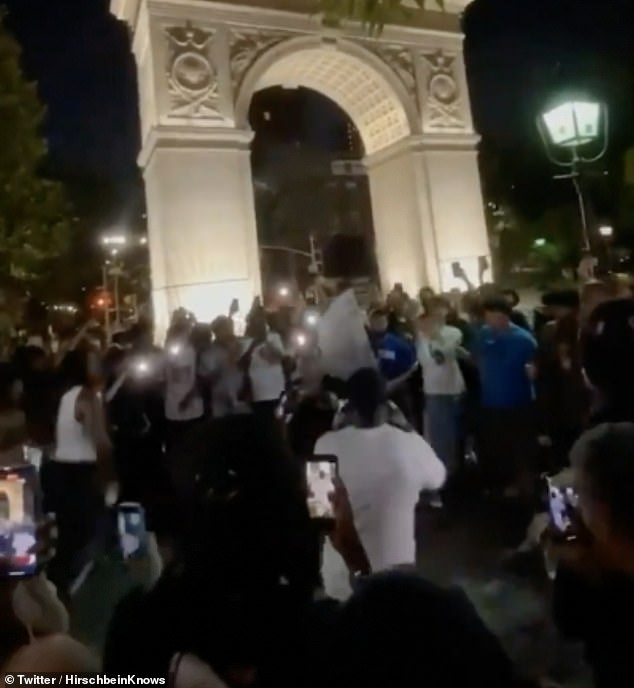 In clips posted to Instagram on Tuesday, at least three of the nighttime fights can be seen being played out in the famous Greenwich Village park. Pictured: A boxing match is seen against the backdrop of the park’s famous archway

While the park usually closes at midnight, the last two weekends have seen a new 10pm closing time brought in, in a bid to stem complaints about anti-social behavior at the site. NYPD and the parks department have said the earlier curfew will be in place indefinitely.

However, when police in riot gear tried to enforce the curfew last Saturday, the defiant revelers fought back, with some hurling glass bottles at officers.

According to NYPD Commissioner Dermot Shea, 23 partygoers were arrested and eight cops were injured in the ensuing scuffle.

Speaking during a TV interview with WPIX on Wednesday, he said ‘Many of them, in fact probably most of them, have been arrested multiple times over the last year,’ adding that not one of those arrested lives in the area.

‘The Parks Department has tried to enforce and close the park — which is their job, by the way — on multiple occasions and they’ve come under fire and had bottles thrown at them,’ the commissioner continued. ‘So they came to other city agencies, including the police department, and said, “We need your help.”‘

In a separate interview, Shea also defended the officers’ actions on Saturday night to NY1, saying ‘When those bottles are hitting the ground and breaking, that’s the same park that the kids are playing in the next day. So I actually think the officers used quite a bit of restraint.’ 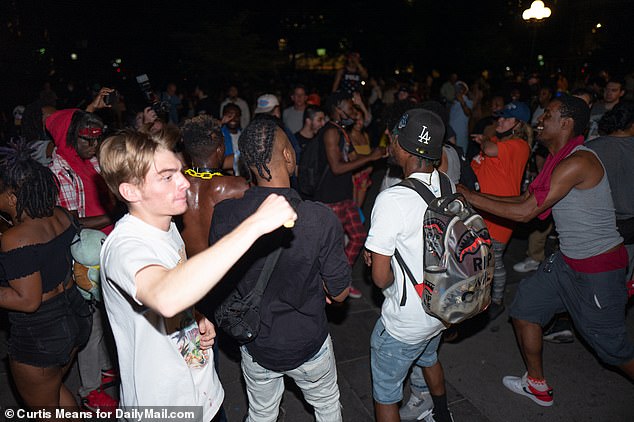 Cops have cited five incidents as reasons for the curfew, such as people blocking a roadway while FDNY and EMS teams responded to a fire, people jumping on cars, and bottles and other objects thrown at police.

Those in the park after the curfew was enforced on Saturday night were filmed jeering and shoving officers after being told to leave, with scuffles breaking out as NYPD officers moved to enforce the new rule.

Covid-19: Delta variant makes up 91% of new UK cases as US overtakes as hardest hit

A Romeo and Juliet story, only with po’boys

Libya: Who is behind the assassination attempt on Bashagha?