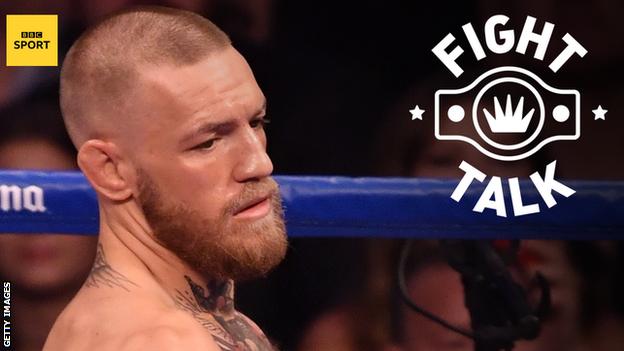 In this week’s Fight Talks we discuss the news that former UFC champion Conor McGregor could return to boxing with a fight against Filipino great Manny Pacquiao next year, Josh Taylor moves a step closer to becoming the undisputed light welterweight world champion and Derek Chisora turns the tables as he trolls upcoming opponent Oleksandr Usyk.

‘I am up for this’ – McGregor sets his sights on Pacquiao

There is only place to start this week; Conor McGregor v Manny Pacquiao – it looks like it really could happen in 2021.

In 2017, UFC star McGregor switched from MMA to boxing, losing to the then best pound-for-pound fighter on the planet in American Floyd Mayweather.

Now, in what would be his second professional boxing bout, McGregor could face another fighting legend.

Irishman McGregor tweeted on Friday that he would be “boxing Pacquiao next in the Middle East”.

A day later the Filipino’s assistant confirmed the two teams are in talks.

Mayweather was the perfect dance partner for McGregor; they are two of the most confident and controversial athletes in combat sport history; possessing unquestionable talent but personalities which often split opinion.

While hardcore boxing fans felt insulted by the mismatch, McGregor and Mayweather succeeding in generating global hype for what became one of the highest grossing fights of all time.

But will McGregor taking on the less outspoken Pacquiao create the same buzz? Perhaps not.

Some fans also suggest that Mayweather could have stopped McGregor sooner than the 10th round, whereas Pacquiao won’t be as kind…

Pacquiao’s achievements are astonishing; the current WBA ‘super’ welterweight title holder and an eight-division world champion, he is arguably one of the greatest pugilists to ever lace up the gloves.

McGregor is a two-weight UFC champion who retired from fighting in June – but it’s hard for anyone to take his ‘retirement’ seriously; it was the third time in four years in which he has walked away from the fight game…

In a lengthy social media post on Sunday, McGregor said “boxing it is for now and I am up for this”.

He also reflected on the fight with Mayweather and said he should have disregarded boxing rules and “landed a boot on the neck” of his opponent.

“Floyd deserved a volley at the least. A shoulder even, break the face,” he added.

“Manny not so much though I don’t think, but I will see how the build-up goes.”

Meanwhile, American four-weight world champion Mikey Garcia told Fight Hype that he is “100%” confident that he will the one facing Pacquiao next.

Whoever Pacquiao ends up facing in 2021, you can be sure that McGregor will still be creating headlines one way or another.

‘The Tartan Tornado’ and fighting pride of Scotland; undefeated and unified world champion Josh Taylor is among, if not sitting at the top, of the best British fighters active today.

On Saturday night Taylor defended his WBA and IBF light welterweight titles by knocking out Thailand’s Apinun Khongsong in the first round.

It was Taylor’s 17th straight win as a professional but fans were left a little disappointed with the quality of the opponent.

After Taylor threw a left to the body, there was a delayed reaction from Khongsong before he hit the canvas and rolled around in pain…

Now in fairness to Taylor, Khongsong was the IBF number one challenger and, as the saying goes, you can only beat what is in front of you.

It was a clinical finish from the champion and he has now set his sights on capturing all of the belts in the welterweight division.

After his win, Taylor said he wants to take on America’s WBC and WBO champion Jose Ramirez.

Briton Jack Catterall is the mandatory challenger for Ramirez’s WBO strap but promoter Bob Arum says he expects the undisputed fight with Taylor to happen in January or February.

“The WBO wants us to take on another mandatory, Catterall. No. No way. We’re going right to a unification,” the American told the Athletic.

But 27-year-old Catterall, who has been the number one challenger for 18 months, is confident he has the beating of Ramirez…

Fancy watching yet another video of Oleksandr Usyk dancing? Of course you do…

The Ukrainian is set to take on Briton Derek Chisora in their much anticipated heavyweight clash on 31 October.

Usyk, throughout his training for this rescheduled fight, has been trolling Chisora with videos like this…

Well this week Chisora was the one having some fun as he, somewhat creatively, reworked the backing track to Usyk’s moves…

As much as we’re looking forward to this fight, we never want this build-up to end.